The Silent Hill series has a way of getting under your skin. It shuns the easy scares seen in its contemporaries and instead creates an oppressive, unrelenting sense of dread. Now that the original Silent Hill has been reborn in Silent Hill: Shattered Memories, the next two entries in the series are up for rerelease. Silent Hill HD Collection includes Silent Hill 2 and Silent Hill 3, as well as Born From a Wish, the bonus chapter from Silent Hill 2 staring Maria from the game's special edition. Outside of the visuals, this collection is presented with a minimum of tweaks and additions but does a great job of bringing these two landmark horror games back for another scare.

Both games look great. The high-definition visuals let you pick up on small details, such as shop signs and the deformities of a monster's face, that were easy to miss in the original games. Fog remains prevalent but has been pushed back to reveal more of the scenery. The lighting effects have also been improved. Previously, darkness was darkness: black, oppressive, and nearly impossible to see through without the intense beam of your flashlight. Now the darkness isn't as thick, and the light sources have been softened to make everything easier on the eyes.

When you start Silent Hill 2, you can choose new or original voices. For all of the game's accomplishments, its original voice acting was awkward and flat. The new voices are a big improvement and add some much-needed emotion to a character-driven story. There's just one problem: James' breathing. When stopping after a long run, James breathes heavily. Whether by design or not, his breathing comes in harsh, metallic wheezes that make him sound like one of the game's monsters. It's a small but constantly jarring annoyance.

Silent Hill 3 doesn't include any audio annoyances, but what it does have is frame-rate lag. This typically occurs in large, open areas with lots of enemies. Everything eases into slow motion until you either kill the monsters or duck into a new area. This problem isn't exclusive to Silent Hill 3, but since Silent Hill 2 has more claustrophobic environments with fewer enemies, it doesn't occur as often in James' neck of the woods. By no measure do these performance dips render either game unplayable, but they are noticeable.

Both games play the same as they did before: James is still trying to find his dead wife, and poor Heather just wants to get home from the mall. In today's action-packed world of survival horror, going back to the slow, methodical controls of a Silent Hill game can be difficult. But in a strange way, the stiffness works to the game's benefit. Your character isn't a superhero and can be easily overwhelmed when two or more enemies attack. James and Heather get tired, miss gun shots, take slow, deliberate swings with their weapons, and reflect the capabilities of a normal person.

One new addition that cuts into the Silent Hill experience is trophies, specifically the little jingle that plays when you earn one. Sure, you can disable system notifications on the PlayStation 3, but doing doesn't disable trophy notifications. It's also unfortunate that Silent Hill 4: The Room, released around the same time and on the same platforms as the previous two, escaped inclusion in this release. Nonetheless, Silent Hill HD Collection is a convenient way for fans to experience the series' early years on modern hardware.

Editor's note: This review originally stated you could disable trophy notifications via the PS3's system settings, which is incorrect. The review has been amended accordingly. GameSpot regrets the error. 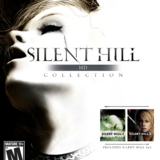