Shining in the Darkness Review

Shining in the Darkness is an old-school dungeon crawler that tests your patience and resolve as much as your valor.

Sega's role-playing Shining series got its start winding through some deep, dark corridors. Shining in the Darkness is the progenitor of the whole line, from the turn-based strategy series Shining Force to the hack-and-slashfests of Shining Soul and everything that gleams in-between. However, aside from the art and musical direction, this dungeon crawler shares little in common with its more complex descendants. This is a first-person, turn-based hack through some of the most fiendish labyrinths ever to grace the Sega Genesis, and it's a test of both perseverance and patience. There are reasons that games like this just aren't made anymore, but at 800 Wii points (about $8), if you've got a serious hankering for twisty mazes, hidden treasures, and hordes of monsters, then Shining in the Darkness can scratch the itch.

You're a soldier in the Kingdom of Thornwood, and nefarious deeds are afoot. The princess Jessa has been kidnapped, a great knight of the land (your father) is missing, and the perpetrator demands that Thornwood be turned over to him. He's Dark Sol, an imposing and dastardly sort of wizard who has cunningly holed himself up in an ancient labyrinth. Being that you're an able swordsman yourself and heir to your father's considerable legacy of service, the King orders you into the ruins to put a stop to Dark Sol's plans and save the princess.

Initially you'll be alone, but soon enough two of your friends join the cause: a shifty-eyed priest named Mylo and a young elf mage named Pyra. There are a couple of cute scenes as you encounter them and they barge in on your adventure, but once they're in your party, they keep quiet. You navigate through the dungeon and town from a first-person viewpoint, but when you meet enemies it's a typical turn-based affair. You can use melee attacks, and your friends can bring into play a number of offensive and defensive spells to assist you. Monsters commonly appear in large group clusters that you'll select for attacks or spells. However, you can't select individual monsters to attack, which means you can easily end up wasting turns unless you allow for some random targeting. The enemies themselves are a cartoony menagerie of critters that range from slimes and skeletons to giant crabs, with plenty of palette swapping to get the maximum mileage out of each tentacle. They're progressively more numerous and nastier the further you explore, and you'll also have to keep cutting through lower-level monsters on your way to more challenging areas.

The labyrinth itself is a giant, multitiered maze of passages with no comprehensive map available. There is a particular item (and later, when you get your two party members, a spell) that lets you bring up a map of your immediate position, but you cannot scroll the map to view other areas, and nothing is marked. You can't see if a given passage is a dead end, you can't see where stairways to other areas are, and you can't mark the location of various items. It takes a good memory and spot-checks of the map (or a pencil and a large sheet of graph paper) to make your way through the mazes with any sort of efficiency, and there are multiple levels and areas to navigate. As you go along, you get better spells and items that let you delve deeply into the labyrinth for long periods of time--and you'll need all that time to steadily level your characters, find important treasure, and kill powerful monsters. The hook to this game is that drive to explore every nook and cranny, open every chest (even if monsters pop out to bite your face), collect rare items to make armor and weapons, and to get powerful enough to slaughter everything in your path. It's definitely satisfying to come back to a difficult area and crush monsters that wiped the stone floor with you two levels prior, or to turn a corner and discover a new stairway that leads to parts unknown.

Shining in the Darkness feels its age, though, given that the sweet, sweet hook of character progression and dungeon domination is often coated in a bitter layer of mindless repetition and monster squashing as you advance. When you exit the labyrinth, you'll have to fight your way back up to where you left off, including any of the lower-level monsters that might happen to be in your way. You can encounter battles as frequently as every step, and given that there's essentially no strategy involved in fighting most of them (just hit attack or group spells until they all go away), there's not always all that much to engage the brain. Somewhere between your tenth and hundredth group in a row of malicious toadstools flexing at you as you inch along, you can easily become unhinged.

The cartoon style of the visuals works quite nicely for the most part. The characters and creatures you encounter are all bright and goofy in their own way, and certain areas such as the cozy tavern really have a lot of personality. The problem is that most of the time you're not hanging out in the tavern and rolling the dice to see if you're getting drunk; instead, you're plodding your way down rows and rows of featureless corridors with nothing interesting to look at. The lack of defining landmarks (aside from the occasional torch or puddle of water) also makes travel harder and harder, given that you'll need to check the map very often if by chance you get turned around and forget which stretch of empty hallway you're looking at. Music in the game is limited to only a few tunes, but they do have remarkable longevity and somehow remain catchy the whole time. There's nothing like finally returning to town after a long drudge in the dungeons to hear the lively tavern music faintly spilling out the door.

The charming look and feel of the game and the satisfaction of progression are the salve over the irritation that the frequent encounters and identical-looking mazes can produce. Shining in the Darkness can last you well over 20 hours of exploring, advancing, and wiping monsters off your sword as you move to confront Dark Sol, but if you're the type of person who goes cross-eyed at the thought of trying to manually map your own dungeons, you're better off giving this a pass. If you're a fan of thoroughly old-school-style dungeon crawlers, it's 800 Wii points of pure insanity. 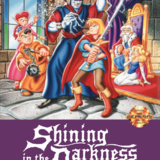