At times shocking and always intense, Persona 3 is not a game you are likely to forget.

The PlayStation 2 may have reached its twilight years, but there is no shortage of great games being released for it. Enter Persona 3, the latest in the Shin Megami Tensei series to reach American shores. Luckily, you won't need any previous experience with the Persona franchise to appreciate its uniquely dark sensibilities, though series fans will find plenty of familiar references in which to revel. This is a quality role-playing experience that weaves distinctive gameplay elements into a fascinating story that unfolds slowly but keeps you constantly guessing. It's also atypically mature, but then again, any game that features your party members repeatedly shooting themselves in the head isn't for the squeamish. Indeed, the game's signature mechanic is this: To summon your inner self--or persona--you point a pistol at your head and pull the trigger.

At the outset of the game, you name your character, who has just transferred to Gekkoukan high school. But it's clear that not everything is kosher at the seemingly average campus. Mysterious creatures called shadows are threatening the locals, spreading an enigmatic disease called apathy syndrome that leaves their victims as listless as the name implies. However, their activity is generally confined to the dark hour: an hour sandwiched between midnight and 1 a.m. Most people are oblivious to this hour, while others are distinctly aware of the creepy dark hour in which the undulating gloom seals most of humanity in gothic coffins. Those unseemly heroes are in touch with their personas, which can be summoned to fight shadows in the realm of Tartarus, where most of them are restricted. At Gekkoukan, known persona users have created the Specialized Extracurricular Execution Squad and are determined to wipe the shadows off the face of the earth.

Saving humanity isn't a new concept, but you'd be wrong to assume that Persona 3 is limited to such a pat description. Instead, the gruesome nature of the dark hour is offset nicely by Persona 3's more traditional boarding school setup, in which your character attends classes, plays sports, and joins the student council. You have the opportunity to establish a good number of relationships with many of the inhabitants of the gameworld, from a love-struck classmate to the injured kendo team captain. Each of these inhabitants has a story of his or her own, and you will find yourself feeling involved with their struggles, no matter how seemingly insignificant. However, your school day meandering and extracurricular activities are more than just contrasting gameplay: How you spend your time here directly affects your combat performance during the dark hour.

This occurs in one of two ways. The more obvious way is to increase your stats by performing activities that directly affect them. For example, studying before bed or at the library will increase your academics, while watching chick flicks at the local theater increases your charm. The other aspect of your school day is your burgeoning relationships. The friendships and romances you build directly affect the personas that you summon in battle because each persona is strengthened by the associated social link. For example, a prospering friendship will earn you the blessing of the magician arcane, which means all personas associated with that arcana will benefit. But you have limited time each day to pursue those interests, so you need to spend your time wisely and concentrate on the activities that build a character that best suits your gameplay style.

Once you've finished tooling around school and town during the day, it's off to Tartarus for the dark hour, though you aren't forced to head there most nights, if you'd rather study or rest up instead. Tartarus is essentially a multistory skyscraper in which you climb from one floor to the next, defeating enemies as you gradually level up to handle the foes on floors above. You can take up to three other party members who have various strengths and weaknesses with you, yet unlike in most other role-playing games, you have no direct control over them. However, you can set up general tactics for each one if you like, such as support/healing. This may seem limiting at first, but as you earn more and more personas for your own character, you'll find that it's intimidating enough handling them all without adding three others to the mix.

You've got standard weaponry handily doled out by a sympathetic cop, but the bread and butter of your turn-based battles are the personas themselves. Each one brings with it any number of skills, and to use them, you first need to activate that particular persona. Once you have the right one in place, you select the spell to use, choose your enemy, and shoot yourself in the head. Granted, it's not a real pistol you use but an instrument called an evoker. Still, you can see shards of your soul flying from your head every time, and it's as macabre at the end of the game's 50 hours as it is the first time you do it. Most foes have a particular weakness that can be exploited with a particular persona skill or a critical hit from your standard weapon. Most of the time, hitting an enemy's weak point in this manner knocks it down and earns you an additional turn. If you manage to knock down every enemy, you can then activate an all-out attack, which sends your party into a hysterical-looking, cartoonlike skirmish, complete with comic book "thwaps" and "bams."

You will initially find new personas as loot, though after-battle goodies are handled differently than in most RPGs. In Persona 3, you choose from multiple potential rewards, which are shown onscreen as cards and then shuffled Three-card Monte style. This allows you to choose the one you want as long as you paid close attention to where the desired card ended up. But once you earn a couple personas, you are able to fuse them together by making a trip to the velvet room. The velvet room is presided over by a mysterious old man and friendly young woman; its existence is one of the game's many secrets. But once inside, you can combine two or three personas into a brand-new one of much higher level. There is a bit of mystery to this process because you don't necessarily know exactly what spells this new persona will brandish, but it will generally be a big improvement over the lost ones. Still, there is always a risk when fusing personas. For example, one of your personas may be your only source of an important healing spell, and you won't know exactly what abilities a persona brings to the table before fusing it.

Fusing personas and developing their linked relationships can be an intricate affair. However, Persona 3 is somewhat simple at its core, and you may find that the game's main structure a little tedious. You'll spend the day increasing skills and developing relationships, the pace of which is halted by frequent loading times, then return to the dorm to set up the night's foray into the dark hour. The hallways of Tartarus also get monotonous because each hallway ends up looking more or less the same. Thankfully, the occasional repetition is broken up by multiple story elements that get you into combat away from Tartarus. Yet there is a certain amount of grinding inherent to the game because each section of Tartarus is broken up by a boss character that must be defeated to move forward. If you aren't strong enough to handle it, you will need to revisit floors you've already explored countless times until you can manage. In fact, you'll need to backtrack a lot as it is because you cannot just enter on any floor but only on floors you've managed to climb to and activate a portal. This often means that you'll be running through the same floors multiple times until you've reached the next level with a portal to activate.

Most of the game's other annoyances are simple things that could have been avoided. You can gain the upper hand on the enemies that wander about by attacking them first to initiate the battle, which requires a well-timed button press. However, with your whole party squeezed together, it's easy to select one of them instead, which throws off the timing and tosses you into a battle in which the enemy has the upper hand. Additionally, you cannot cycle through your party's inventory very easily because you are required to walk up to each one and swap out any armor or weapons. It's made doubly silly by the fact that you are all clumped together, so it's easy to select the wrong party member. This would have been alleviated by the standard setup in which you can just enter your own inventory and cycle through the party from there.

Persona 3 looks fantastic and is dripping with flair, from character models to monster designs. Battles are the definite highlight here, from each member's personal manner of pointing the evoker to the imposing personas themselves. The school portions are equally nice to look out, thanks to subtle, expressive animation that brings you even closer to the characters that drive the narrative. Also of note are the incredible anime cutscenes that set the dark tone for the chilling events that inevitably follow. The sound is almost as equally well done, with plenty of loud, eerie sound effects and solid voice acting. The soundtrack is outstanding, with a mix of ghostly chords and Japanese pop tunes that feel just right in the moments they're used.

Persona 3 is a game you will remember, if not for the complex characters or intriguing story, then most certainly for the endlessly shocking pseudo suicides you're subjected to time and time again. Some of the initial intricacy gives way to tedium over time, but this is an undoubtedly great game that is both darkly envisioned and slickly executed. The fact that it manages to stand out in an overflowing crowd of RPGs on the PS2 is no mean feat, and if you appreciate a smart story, it will be an excellent addition to your library. 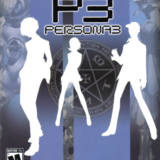