Fun combat and an intriguing story make up for the dull detective drudgery in this atmospheric period adventure.

The Japan of the mid to late 1920s was a unique blend of the old and the new as the island nation struggled to maintain its traditions in the face of rampant modernization. Shin Megami Tensei: Devil Summoner 2: Raidou Kuzunoha vs. King Abaddon uses this turbulent period of history to great effect, crafting a moody and atmospheric world to tell an intriguing and stylish story. Though the game suffers from inconsistent and sometimes confusing gameplay and a flawed exploratory camera, its engaging battles, addictive devil management system, and low price point make a solid case for role-playing game fans to plug their PlayStation 2 consoles back in to make a deal with a devil.

When the Yatagarasu, the shadowy organization that watches over the sanctity of Japan, has reason to believe an imminent threat is approaching Tokyo, it's up to Raidou Kuzunoha to step in and save the day once again. The young Raidou--the 14th person to assume the title of the greatest devil summoner--is dispatched to the capital to keep an eye on it and take what steps are necessary to avert disaster and maintain the balance of the supernatural world. Along for the ride is Raidou's chatty and often sarcastic feline companion-slash-mentor, Gouto, and serving as the cover for their operations once again is the Narumi Detective Agency, which is run by the carefree and decidedly dapper modern gent Shouhei Narumi. When a lovely but suspicious dame hires you to find a man named Dahn, what looks like a simple missing-persons case turns out to be anything but, and Raidou is thrust into the middle of a mystery that involves masked ninjas, giant insects, and a whole lot of bad luck.

As a devil summoner, dealing with the supernatural is Raidou's specialty, and with all the strange happenings in the capital, there's no shortage of it. While investigating for clues, he frequently stumbles across wandering devils that need to be put in their places, and calling in demonic backup of his own is where Raidou's talents really lie. Up to two devils can be summoned at a time, and by paying careful attention to your enemies' weaknesses and calling upon the right friends to take advantage of them, you can dish out some serious damage. Watch out, though, because your devils have their own weaknesses, and enemies won't hesitate to take advantage of them. You can't just let your devils do all the work, and thankfully Raidou is more than equipped to hold his own in a tussle. Getting up close and personal to show off his swordplay is his primary source of damage, and he's also a crack shot with a revolver, which hits for less damage but can stun rogue devils. Combat is in real time, and Raidou is surprisingly nimble on his feet, which makes dodging incoming hits as easy as dive-rolling out of the way.

Though pursuing the path of violence is fun with this battle system, it's not always the best course of action: sometimes it's better to chat up your enemies instead. Through careful application of the art of negotiation, you can recruit a devil to your side, provided it's in the mood and you satisfactorily answer its line of questions and comply with its demands. Constantly expanding your chthonian roster is important, because you grow as a devil summoner by gaining loyalty from your devils. Loyalty is earned by taking your devils into battle, which in turn increases the number of devils you can keep at a single time and grants Raidou higher ranks (which determines what side quests you can accept). It's also important to keep a diverse portfolio of devils, because each one has different field abilities that help with your detective work--the pagan Lilim, for example, can read minds, a power that helps you glean information that you would otherwise be unable to obtain.

When not sweet-talking or pounding on devils, Raidou busies himself by running around the various districts of the capital searching for clues. Despite the detective shtick Devil Summoner 2 has going for it, these are the weakest parts of the gameplay because your immediate goals often aren't well communicated, and there are often long stretches without combat. Furthermore, each area is displayed from a fixed camera location, and every so many steps the camera moves to a different spot. Seeing the same scene from multiple different angles can be disorienting, which makes even navigating around the world an exercise in frustration.

If you need a break from mundane story investigations, you can always return to the detective agency and pick up some of the extra case files that build up on your desk and gather dust. While most of these side quests are simple fetch missions, some of them send you to specific locations to track down and dispatch more powerful devils, and others reward you with new abilities you'll need in order to push on in the main game. You can also spend time in the dark versions of the capital to tame more devils to add to your collection, which can then be fused together two at a time to create entirely new ones in the laboratory of the Dr. Frankenstein-ish Victor, a quirky but friendly demonologist. Victor can also synthesize new weapons for you, and using either of his services can be fun and rewarding in and of itself.

The rich game world is brought to life with the Shin Megami Tensei series' trademark stylized designs and a jazzy, upbeat soundtrack. Unlike in the recent Persona games, which favored an anime look and feel for the characters, everyone in Devil Summoner 2 is rendered and animated in full 3D. Though Raidou and company look great, they're all suspiciously silent due to a complete lack of voice acting, which makes for some awkward moments during conversations. Nonetheless, the entire game positively oozes with style, which more than makes up for this and the slightly aged graphics produced by the PS2 hardware.

Though it suffers some missteps from the lackluster investigation sequences and poor camera, Shin Megami Tensei: Devil Summoner 2: Raidou Kuzunoha vs. King Abaddon is an engaging and suspenseful adventure through an atmospheric world filled with supernatural intrigue. Fusing devils or recruiting new ones is addictive, defeating powerful fiends is rewarding, and unraveling the story is entertaining. If you're looking for a quirky and fun game to slake your thirst for an RPG, Devil Summoner 2 may be just what you're looking for. 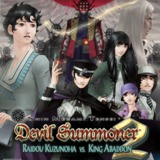 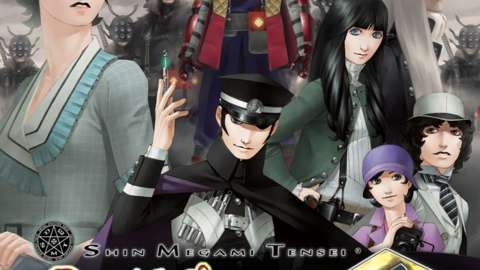