Shelter doesn't reach the high level of profundity it aims for, but this journey through the wilds makes a few poignant points all the same.

It is said that the greatest despair that a parent can face is the death of a child. Shelter seeks to mimic parental love and the grief of loss by making you the caretaker of five youngsters who need to be nourished and protected as you lead them through the wilderness we call life.

Your children aren't human, however, nor are you: you are a mother badger escorting your offspring through meadows and forests, feeding them when possible and keeping them out of harm's way. You can't tell your tottering badgerlings what to do; you simply meander or trot forward and they stay in step, sticking close for comfort and gravitating toward edible vegetation, which you dig up and feed them if you want them to stay healthy on the journey.

It's a starkly linear trek, 90 minutes long or so, and it's the sense of place that makes Shelter initially intriguing. Trees and bushes are made up of simple shapes with splotches and swirls smeared across them to simulate shadow and texture. Pastel-shaded streaks are slashed across square panels on the ground to simulate the forest floor, each panel perpendicular to those around it. It's a unique effect that gives this natural world an oddly synthetic pattern, as if a stonemason had come through and thoughtfully arranged nature-themed bathroom tiles on the floor. In a nighttime level, the dark sky is criss-crossed by rows of moons and planets that recall a child's bedroom plastered with glow-in-the-dark stickers. Such elements seem jarring at first, but each level's consistent, complementary color scheme softens the edge.

The most striking effects are those that communicate danger. A hovering bird of prey is identified by its ornate ground shadow, and opaque walls of water rush down creeks, provoking fear and uncertainty. Shelter's use of such perils is at once its most effective and most disappointing mechanic. Your role as a parent is to protect your young, who follow you with the utmost trust. Leading them across a turbulent waterway could result in the loss of a precious youngster, who could get swept away to an untimely death without any fanfare. Nature doesn't care about this loss, but you will. When your group of five innocents is diminished by one, there's a gnawing sense of failure, not as a game player, but as a parent with a duty to shield your young.

The impact of this loss gives way to predictability, however, when you discover that in every case, you perform the same actions to avoid hazards: pause, then hurry. When the shrieking bird appears overhead, you wait for its shadow to drift out of the way so you can rush from one tuft of tall grass to the next. When you cross a tempestuous creek, you wait for clear passage before hightailing it across. Because Shelter stretches this one idea so thinly, the strength of your emotional connection to your offspring is diminished, replaced with rigid reminders that these are digital creatures, and your connection to them is only an illusion. When that illusion is shattered, Shelter loses its power.

Shelter's promising scavenging system could have inspired the tension its avoidance mechanics sometimes lack, but it too misses the mark. You can dig up certain vegetation like carrots and place it on the ground or give it directly to an individual youth, and can even sneak up on wildlife like fox cubs and leap onto them for a quick kill. At first you might find yourself memorizing the stripes on each badger cub's back and looking out for a gray coat (the game's telltale sign of hunger), following your instincts to treat each offspring equally so that none gets under- or overfed. But food is so plentiful that you quickly disregard this sense of responsibility; as long as you take advantage of every food source, you needn't worry about each cub getting its fair share.

The most fearsome level is the one that drives home the circle of life's innate apathy. You move through the dark, with only the immediate vicinity lit around you. You cannot rush forward at will as you can in other levels, only meander. There are unseen predators lurking, identifying themselves with a startling ruckus that sends your young'uns scurrying. And so you can finally sprint, hurrying to keep your children in sight, and quickly performing a head count when the commotion has ended. One-two-three… and that is it. Another cub gone, another wave of self-doubt. You have neglected your duty, and the price is a life cut short.

You can hobble to Shelter's conclusion as a lone survivor, turning the adventure's bittersweet but hopeful conclusion into a thought-provoking statement on the futility of existence. This is a lovely game, let down not by its mechanical simplicity, but by its resistance to doing more with those mechanics. Yet when it taps into basic animal instinct, Shelter reminds us just how precious life is, and how apathetic the laws of nature are to our pleas for mercy. 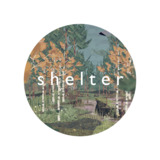 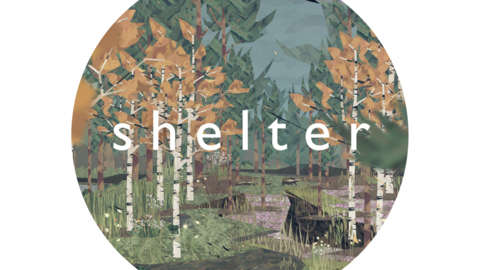 Shelter is a game where you take on the role of a badger mother who needs to protect her cubs from the dangers that exist in nature.