Fans of old-school platformers have had plenty of choices lately, and WayForward’s Shantae: Half-Genie Hero--the latest in the series that debuted on the Game Boy Color--is yet another great addition to the list. The franchise has received two excellent, intentionally retro-styled adventures on modern platforms, but Half-Genie Hero mixes in modern 3D graphics with its traditional 2D gameplay, which makes for a game that straddles the line between new and old.

The Shantae series always had a distinct, engaging tongue-in-cheek quality to them, and that’s on full display here. Shantae herself is a self-aware caricature of 16-bit icons--she’s moody and snarky and giddy in equal measure and the side characters are all fun in their own way. The plot feels a little thrown together at times, quickly establishing characters and story elements with little explanation. Admittedly, depth of story usually isn’t the main element we look for in a classic side-scroller, but the overall story feels a bit weaker here than it did in Shantae's previous outings.

In her latest adventure, Shantae is still the Guardian Genie of Scuttle Town, a place that's constantly overrun with comically inept pirates, and regularly falls victim to crazy magical schemes. The town is once more attacked by the self-proclaimed Queen of the Seven Seas, Risky Boots. It seems Ms. Boots is after a set of Shantae’s uncle’s blueprints for a machine that has the power to protect the entire town--or cause immense destruction.

The reason this otherwise straightforward story feels disjointed is the relatively non-linear structure of the game. Shantae picks up new abilities by completing numerous mini-missions that pop up around Scuttle Town, and these abilities--usually in the form of transformation dances--enable Shantae to reach new areas within various levels.

It quickly becomes clear that these side-quest-like missions are integral to finishing the main story objectives, creating occasional confusion about what you should focus on at any given moment. There’s no map or real way to keep track of multiple ongoing quests, only an NPC who provides general guidance. But even that doesn’t always help. Some active goals simply can’t be completed until you acquire a specific power by completing one of the aforementioned mini-missions, though it's a guessing game to determine which one will give you the specific skill you need.

Levels expand beyond the town and into locations like deserts, factories, lush forests, waterfalls, and temples. Each world is chock-full of secrets to find, requiring multiple return trips to discover every last one. This process can get a bit repetitive, especially during the opening hour or two when you’re mostly going back and forth between the same few map areas, but the influx of new abilities helps build momentum over time. Thankfully, a couple quality-of-life options open up later that help expedite the process: you can buy a dance move that allows you to jump straight to the next part of a world, skipping superfluous sections altogether. Once you’ve acquired the target item or ability, you can then instantly warp back to town.

Generally, Half-Genie Hero is an accessible game, although you will stumble across a few challenging platforming sections. A big part of the gameplay's appeal comes from Shantae’s eight transformation dances. Turning into a monkey lets her jump much farther and climb walls, while a spider transformation gives her the ability to scurry across ceilings. As an elephant, Shantae can bash breakable blocks, and no item or enemy is safe underwater when she activates her mermaid or crab forms. Of course, Shantae still has her familiar hair-whip attack, and she can use magic to throw fireballs, create lightning, and form special shields.

The variety of powers at your disposal is one of Half-Genie Hero's strong suits, allowing for a lot of fun experimentation during combat. Like many classic action-platformers, enemies mindlessly move back and forth and attack on sight, with little apparent AI. Similarly, boss battles are entirely pattern-based, but fighting cartoonishly massive enemies is riotously fun--a giant worm, huge mermaid, airships, and other absurd, screen-filling battles await.

So, while some minor structural squabbles hamper Half-Genie Hero's pace, the overall game remains a delightful experience. The move to sharp graphics makes the game feel modern, yet the series' old-school charm lives on in the vibrant colors and expressive character animations. And the soundtrack is surprisingly catchy--with hilariously passionate (if minimal) voice work and a great score. It's easy to get wrapped up in fighting and platforming through Half-Genie Hero, which speaks to the pedigree of the series, and how well it translates to Shantae's latest adventure. 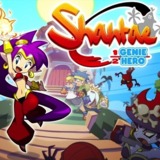 Jason D’Aprile spent seven hours exploring Half-Genie Hero and is still trying to find a few lingering secrets. GameSpot was provided with a complimentary copy of the game.