The lack of any prolonged contact with other characters in the game and the repetitive musical score doesn't only make the game feel boring but lonely as well.

For fans of the original Shadowgate, Shadowgate 64 will be a fun-filled trip down memory lane for awhile, but once the excitement of recapturing past glory wears off, the game becomes a bit boring by today's standards. Those of you who aren't familiar with the original NES game and aren't fans of puzzle-driven RPG games might just want to skip this one. The game is played from a first-person perspective, putting you in the shoes of a halfling by the name of Del who is mistakenly thrown into the dungeon of Castle Shadowgate. While you're waiting for your punishment, you find an escape route - this is where your journey begins and the story unfolds.

The gameplay is extremely simple and straightforward: All you really do is guide Del through the vast castle collecting just about anything that you can get your hands on. Each and every item you come into contact with has a place or purpose, although more often than not those places or purposes are a little strange. Each item and area you enter come with a little description that gives you more insight than you might get at first glance. In addition, you come across lots and lots of books that explain various things about the world you're in - some books are practical and to the point, offering valuable instructions, while others are more elusive in the clues they give.

Visually, the game is well below the average of anything we've seen on the N64 in quite a while. The game has the flat, grainy, washed-out look of a first-generation title. Aside from a few characters that you encounter, the game is literally devoid of any animation at all. In some of the areas it is hard to tell that objects you should be interacting with are even there. Most of the objects you pick up look fairly representative of what they are supposed to be, although there are a few instances where you're not quite sure what it is until the written description pops up on the screen.

From an audio standpoint, Shadowgate 64 isn't anything all that great. The music, while fitting, changes when you go from areas like the sewers to the library, and even then it sounds pretty much the same. The sound effects of different objects like the clanging of a pipe against a wall or the turn of one of the pages in a book sound rather authentic and breathe add a bit of life into the otherwise uneventful game.

In the end, Shadowgate 64 is a very slow-paced game that has a lot of nostalgic value for fans of the original game, but it soon becomes increasingly frustrating and uninteresting. I personally enjoyed the game for the first few hours, but once I started coming across puzzles that were similar to ones I had already done, the game began to get stale. The lack of any prolonged contact with other characters in the game and the repetitive musical score doesn't only make the game feel boring but lonely as well. I would have to say that only hard-core RPG fans who have lots of patience should spend the time playing Shadowgate 64. 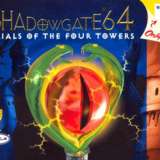