With a carefully balanced blend of action and exploration, Shadow Complex is Super Metroid for a new generation.

2D exploration-focused action adventure games have been a dying breed in the years since Super Metroid reigned supreme. With Shadow Complex, developer Chair Entertainment has released the first major game in this genre on a home console platform for nearly 12 years. The traditional sidescrolling combat is exciting and satisfying, while the addictive exploration elements will draw you deep into the adventure. With the stunning infusion of a third dimension, as well as competitive leaderboards and fun virtual-reality challenge rooms, Shadow Complex is an incredible adventure that won't be forgotten for a long time.

Set in the world of Orson Scott Card's Empire novel--though you would be hard-pressed to ever discover this unless you happened to read the game's description while downloading it--Shadow Complex is the story of a couple in the wrong place at the wrong time. When Jason Fleming and his girlfriend, Claire, go on a spelunking trip in the mountains and accidentally discover a secret underground base, they run straight into a radical organization that calls itself the Progressive Restoration. With Claire captured, it's up to Jason to find a way to storm the Restoration's stronghold and rescue her. Though the story of Jason's mission to save his girlfriend is poorly integrated (a shame, considering it builds upon the work of an award-winning author), it is really secondary to the action and exploration, both of which are brilliantly blended to create a fun and addictive experience.

Starting out with only a flashlight and his quick wits, Jason must search through the expansive underground facility for weapon and equipment caches to arm himself. Though you're initially restricted to a small section of the Restoration base, each new ability you obtain expands this area. This, in turn, lets you find even more weapons and power-ups; thus, you are constantly rewarded for your efforts. In addition to illuminating your way through the darkness, your flashlight will reveal the weaknesses of destructible doors, crates, and vent covers, making it easy to tell which areas you'll need to revisit. And with the map screen and its helpful--yet optional--prompts, you'll rarely be at a loss as to where you need to go next. Retracing your steps and backtracking is a necessary part of your adventure, and though it's generally just a minor inconvenience to get from one location to another, Shadow Complex could have benefited from something like the teleport rooms seen in every Castlevania game since Symphony of the Night. This is especially true in the latter parts of the game when a major route is off-limits for story purposes. That said, the constant thrills of finding the dozens of power-ups, exploring every nook and cranny on the map, and pushing your completion percentages all the way to 100 are more than enough to keep you going.

As you infiltrate the Restoration's base, you'll encounter legions of heavily armed soldiers and do battle with their powerful battle mechs. Though the game is a 2D side-scroller, the graphics and environments are all rendered in 3D, which leads to some unique tricks with perspective where soldiers routinely patrol and attack from inaccessible areas in both the foreground and background. Generally speaking, dealing with such foes is as easy as using the right analog stick to paint your laser sight across them and squeezing off a few rounds because the game usually knows when you're trying to aim at foes in other planes. However, sometimes it simply isn't possible to do so without adjusting your position because your laser sight refuses to reach into the background, which can be irksome, especially when you're taking cover behind crates or a blast shield. Precision targeting can also be used to pull off headshots for maximum damage or to interact with the environment in a variety of ways: You can shoot down overhead power cables to electrify nearby enemies, explode fuel canisters, shoot down the explosive tiny robots that patrol the walls and ceilings, and more. And for added variety (or if you want to keep things quiet), you can sneak up and take out soldiers with an impressive melee attack or use an unlockable powerful ground pound attack to simply vaporize them.

However, the real thrill of combat in Shadow Complex doesn't come from the small-scale hallway fights but the huge set piece battles. The Restoration knows that you're loose in their base, and they send everything they've got after you, from mobile powered suits to spider mechs. Each of these boss battles is enormously fun and often surprisingly interactive with the environment, such as a mech encounter in which you goad your enemy into blowing open a series of water mains and drowning itself. As you progress deeper into the base, these conflicts intensify, culminating in an epic final battle. Outside of the boss battles, the turret sequences are also a pleasant surprise. While they're often boring affairs in most games, getting behind a stationary cannon on the Restoration's base is an absolute treat. The camera shifts, and you can mow down wave after wave of your enemies in an unexpected way--likely cackling to yourself the entire time.

Shadow Complex's developers found a way of making the single-player game extremely competitive, as if it weren't fun enough already. Upon completion of the game, which can take as little as an hour (for a highly skilled individual on subsequent play-throughs) or as long as 10, you're awarded with a numerical score based on a number of factors, which is tracked on a leaderboard. There are also a number of other, more specific leaderboards available for tasks, such as the number of enemies you've finished off with melee attacks, the number of headshots you've performed, or the number of soldiers you've made scream as they die. Thanks to helpful in-game notifications that pop up every so often, you know exactly where you stand with these tasks in comparison to your friends, and working your way to the top and staying there can be difficult but rewarding in its own right. And if you want to compete in ways that are more skill-oriented, you can work on achieving the highest scores and the lowest times in the challenge courses, which are virtual-reality simulations that teach you how to maximize your various abilities and apply them in ways you may never have thought of otherwise.

Constructed using Unreal Engine 3 technology, Shadow Complex looks fantastic, from the wooded surface areas to the rippling water found in underground reservoirs. Enemy rag-doll effects, explosive physics, and fluid dynamics are all on full display, and blasting a guy off a ledge so he falls screaming to his death never ceases to amuse. Each area of the base is sufficiently varied and brilliantly paired with an admirable soundtrack. In one eerily beautiful portion of the game, you traverse a flooded section of the base. As you push past the free-floating corpses within, a somber theme underscores the emotional poignancy as you realize the extent of the destruction.

By focusing on the core themes of exploration and high-intensity combat while treating you to lush graphics and multiplane complexity, Shadow Complex is an excellent current-generation take on a classic gaming genre. There are enough secrets hidden in the Progressive Restoration's massive underground facility to keep you going for hours on your first play-through, but with the four difficulty settings, competitive leaderboards, challenge rooms, clever achievements and bonus objectives, you won't want to leave it at that. Ultimately, Shadow Complex is the sort of game that you can come back to again and again, and at 1,200 Microsoft points ($15), it's a gem that you shouldn't miss out on. 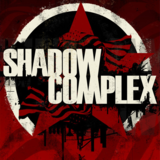