Scourge: Outbreak is all kinds of awful.

You know you're playing a truly awful game when, after just one mission, you're wondering what on earth possessed you to buy the thing in the first place. Maybe it was the lure of a story-driven four-player co-op campaign? Or the promise of classic capture-the-flag and deathmatch multiplayer? Or perhaps there was simply a vast hole in your life that only a generic third-person shooter could fill? Regardless, if by the time you reach the second mission you're praying for your Xbox to spontaneously combust, just so you're absolutely sure that the game never graces your television again, chances are you've picked up a lemon. And boy is Scourge: Outbreak a big, fat, awful lemon.

That much is clear upon seeing the opening CGI sequence, a cliched gore-fest that might as well have been crafted in the mid-'90s, such is the clumsiness of its animation. Then the characters start talking, and oh you wish they would stop; each of their lines is delivered with the conviction of an apathetic brick. But given the dialogue and story the voice actors had to work with, it's hardly surprising. Scourge: Outbreak's story ploughs the very depths of hackneyed sci-fi, dredges up some drivel, and coats it in a thick layer of macho tedium.

It tells the tale of Echo Squad, a group of meat-headed mercenaries hired by a generic megacorporation to rescue a doctor trapped inside a research facility. Or maybe it's a scientist trapped in a prison? Frankly, the story is so poorly structured and so mind-numbingly uninteresting, it's hard to muster the enthusiasm to follow it. What is noticeable, though, is how many games Scourge: Outbreak has ripped off in its quest to seemingly be the most homogeneous third-person shooter out there, as if the developers tried to paint a masterpiece by mashing together the world's greatest artistic works and ended up with one big, smeary brown mess.

The characters, for example, look like someone tried to cram the muscle-bound dudes of Gears of War into the svelte lines of a Crysis nanosuit, and then chucked a few Adam Jensen-style cyborg details in for good measure. Even a couple of Crysis-style suit abilities have been added, albeit ones that are largely useless. The suit, known as an Ambrosia suit (yes, really), lets you create a temporary shield or create a shock wave for killing multiple enemies. The problem is that neither the shield nor the shock wave offers any real advantage over simply hunkering down behind some cover and letting rip a few rounds. The shield doesn't last long enough, and the shock wave is pitifully underpowered. The fact that you have to recharge the suit after mere seconds of use from randomly placed Ambrosia containers makes it all the more tedious to use.

Not that firing weapons is that much more entertaining. The selection on offer mirrors what you'd find in Gears of War, but is styled like the futuristic fare from the Mass Effect series. There's a standard rifle, an enemy rifle, a shotgun, a sniper rifle, and a few wild cards like a Gatling gun. The trouble is, not one of them is at all satisfying to use. The spray from each weapon is so imprecise, particularly the shotgun, that even at close range you're lucky to land one bullet, let alone enough to take down an enemy. Plus, the paltry weapon sounds and complete lack of heft and power to each shot make matters worse.

Then there are the enemies, who are powered by an AI so terrible that they leap headfirst into shotgun fire without a care in the world. Or they run around like headless chickens desperately trying to find cover, but fail miserably and duck in and out of it like overactive jack-in-the-boxes. As if that weren't enough to contend with, many enemies are ludicrously overpowered so that even after several point-blank hits with a shotgun, they're still left standing. And there are times when your weapon fails to reload in the middle of a heated firefight, or it reloads but is then stuck firing repeatedly until you swap it out for another.

At this point you're probably hoping for something, anything, that might make this game enjoyable. Instead, you're saddled with missions that are little more than point-A-to-point-B affairs with a bit of dodgy dialogue thrown in along the way. You shoot some guys, open a door, shoot more guys, and then watch a cutscene. Repeat for six hours, and you're done. There's four-player co-op available if you must inflict Scourge: Outbreak on your friends, but don't expect any co-op-specific features: it's the exact same campaign that makes you want to smash a controller into your face after five minutes. Oh, and there's competitive multiplayer too, but suffice it to say that shooting real players does not make the weaponry any less awful, or the suit powers any more useful.

Frankly, it's a mystery this game exists at all. The thing about shooters is that, well, there are a lot of them. And in a genre as saturated as the shooter category, you either have to create something unique or need some deep pockets to create that AAA Hollywood experience. Not only is Scourge: Outbreak neither unique nor slickly produced, but it's fundamentally flawed in all the key areas that a great shooter needs to excel. It somehow even manages to make the Unreal engine look a pop-in-fest full of awful repetitive textures and jaggies worthy of the original PlayStation. There's no place in the world for a lemon of this magnitude. 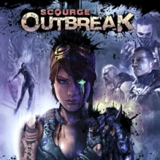