After Saints Row: The Third, it was hard to imagine how this series of increasingly zany open-world crime games could possibly get any zanier. Rather than attempting to tackle that challenge head-on, Saints Row IV sidesteps it by being an almost completely different type of open-world game. Sure, the core of Saints Row is still there; there are still plenty of absurd weapons, costumes, and activities. But the way you interact with the world has changed. No longer are you an ordinary earthbound mortal. Saints Row IV turns you into a superhero capable of running up the sides of buildings and flinging people with your mind. This isn't a refined game or a challenging one, but it is a sometimes hilarious playground of a game that gives you plenty of fun abilities to use and plenty of opportunities to use them.

How does the game explain your new capacity for doing things like leaping tall buildings in a single bound and zapping enemies with freeze blasts? It's simple. You saved the world from a terrorist threat and became the president of the United States. Then Earth was invaded by aliens, and the evil alien overlord had you placed in a Matrix-style computer simulation of a city where, much like Neo, you can acquire all manner of abilities that break the rules of the simulation.

Saints Row IV mines its goofy premise for all it's worth. When "What Is Love" by Haddaway comes on as you're escaping from an alien spaceship, the juxtaposition of grim sci-fi visuals with '90s dance beats is so unexpected that it's delightful. And there's an infectious joy in the way your extremely customizable character, puckish rogue that he or she is, delights in it all, whether you've opted for one of the male voices, one of the female voices, or the aptly named Nolan North voice.

The simulation in which you spend most of the game is a virtual re-creation of the city of Steelport, and the city's layout hasn't changed much since Saints Row: The Third, but the evil alien overlord, Zinyak, has remodeled a bit, and he likes to keep it gloomy. Because there's no day-night cycle during the course of the campaign and the whole city is shrouded in darkness, Steelport is a drab, monotonous setting. But it's much more attractive on the PC, where objects are sharp and defined well into the distance, than it is on consoles, where objects even a short distance away look muddy by comparison.

Given that this is a game in which you can run around naked shooting people with an Inflato-Ray, you might expect the humor throughout to be crass and juvenile. And, for the most part, it is, but not always in the ways you expect. The game's humor is unabashedly stupid, but it's smart about being stupid, working in references to Shakespeare, clarifications about the distinction between alliteration and assonance, and knocks at those silly people who don't know the difference between a robot and a mech suit. The banter among Saints is consistently sharp and will definitely have you laughing out loud on numerous occasions.

Very early on in Saints Row IV, you acquire the abilities to leap incredibly high and to sprint at superhuman speeds, and by collecting ubiquitous glowing blue clusters, you can enhance these abilities and the others you gradually unlock. Once you can sprint, you'll probably hardly ever use a vehicle again, since you can run faster than any car, which makes all of the car customization options carried over from earlier games feel a bit superfluous. But it's hard to lament the lack of emphasis on vehicles given the exuberance that can accompany leaping 15 stories into the air and gliding all the way across town.

Those collectible clusters are visible from a great distance, so on your way from point A to point B, you're constantly incentivized to divert from your path, zipping up this building or leaping atop that house to collect them. And if you've attracted too much unwanted attention from the authorities, you can wipe out your notoriety by pursuing a golden snitch-like alien computer orb as it zips around the streets of Steelport and destroying it. It's a refreshing take on the common process of wiping out your wanted level in open-world games, and one that makes using your sprint ability a lot of fun.

While sprinting may replace driving as your primary way of getting around, the powerful attack abilities you acquire, like freeze blast and telekinesis and stomp, don't totally replace your regular weapons, but instead just augment your arsenal. Your offensive abilities need a brief time to recharge, so in between each use, you have a reason to switch to another ability or fire a few shots of whatever weapon you have handy. Unfortunately, though enemies may sometimes overwhelm you through sheer numbers, their AI is thoughtless, so the satisfaction of battle comes not from overcoming a challenge, but from reveling in the power fantasy of obliterating them with energy swords and dubstep guns.

Because the game is so good about doling out new weapons and abilities at a steady pace, you often feel like you have some fun new toy with which to torment your puny alien oppressors. However, because you have so many ways of so effectively overcoming them, combat eventually starts to feel rote and inconsequential, and you may often find yourself just freeze-blasting and shattering your enemies repeatedly to be done with a fight as quickly as possible. And it doesn't help that even though many of your weapons have crazy visual effects or other gimmicks associated with them, they lack any sense of oomph.

Thankfully, there are activities that give you a compelling reason to use some of your abilities. In the twisted game show Mind Over Murder (from the mind of returning murderous madcat Professor Genki), you need to use telekinesis to hurl people, cars, and Genki heads through designated hoops, and it's empowering to zip around the city streets, picking up hapless pedestrians and sending them flying for your own benefit. But the best activities are the old familiar standbys. Hopping into a tank to cause as much destruction as possible is a simple, explosive pleasure, and hurling yourself into oncoming traffic is still good for a few morbid laughs.

Saints Row IV definitely recycles plenty of ideas from earlier games in the series, but it's also frequently inventive, not just in its shift from absurd crime game to absurd crime game with superpowers, but in the content of its story missions. You play a 2D beat-'em-up, return to the series' Stilwater-set early days, complete a Metal Gear Solid-esque stealth mission, battle a Godzilla-size can of the Saints Flow energy drink, and get embroiled in all manner of other insanity. Almost every core story mission and optional crew loyalty mission has an entertaining concept or a funny surprise in store. However, these missions often focus on the same ho-hum combat you find throughout the game, so even though the ideas on display are varied, the gameplay feels a bit flat. Still, it's well worth playing through the story missions just because of their outrageous scenarios and sharp writing.

Even if combat sometimes falls into a rut, there are more than enough surprises in the game's story missions to keep you entertained, and as in previous games, you can increase the mayhem by inviting a friend along to do missions and other activities. Saints Row IV owes a lot to games like Crackdown and Prototype, but the absurd humor that infuses every aspect of this game gives it an identity all its own. The simulated city of Steelport doesn't offer deep gameplay or the most satisfying challenge, but it is a great place to mess around.

View Comments (389)
Back To Top
7.5
Good
About GameSpot Reviews

Carolyn has been wreaking havoc in urban open worlds since the release of Grand Theft Auto III. Alas, she hasn't yet figured out how to leap around San Francisco like some sort of real-life Neo. 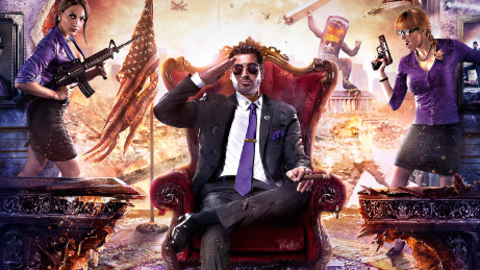 When an evil alien overlord traps the human race in a simulated world to enslave them, only the Third Street Saints, having been elevated to the office of the President of the United States, can save the world.