Rogue Legacy is an immensely rewarding action game that strikes a terrific balance between permadeath and progress.

We pass on a lot of traits to our children. Smart parents might bear a smart daughter. Athletic parents may birth a future sports star. An archmage with a lot of points in magic damage may raise the most magically adept assassin the world has yet seen. So it is with Rogue Legacy, a game where your hero's permanent death doesn't mean a permanent loss of progress. Which is good, because making that progress is a blast.

In this 2D action game, you jump, slash and magically blast your way through dozens of randomized rooms, fighting the likes of skeletons, mages, armored ace-wielders and even animated portraits. Were it not for Rogue Legacy's light-hearted tone, you could easily trick somebody into thinking it's the next Castlevania title headed to the Nintendo DS. This is a compliment, not a complaint, as those games have much that is worth emulating.

Your main desire in Rogue Legacy is gold, and lots of it. As you run through the map, enemies, chests and destructible objects drop money that you can use to upgrade your character. You also find blueprints for new equipment, runes that give you new abilities, and bosses you must defeat in order to see the game's ending. There is a catch, though. As soon as you enter the castle, you won't be able to make any changes or upgrades to your character. You fight until you die, at which point one of your children takes your place.

Still, you want to do as well as you can during each run through the castle, as the first thing you do when starting a new game (after choosing your class from a randomized selection of three heroes) is spend your hard-earned money on new upgrades. You invest in everything from health and damage upgrades to new classes and equipment. The downside? In order to enter the castle again you must give up all (or, later, only most) of your unspent gold. Want a great new piece of armor but you didn't earn enough money during your last game? Too bad. You can't save up for it. This is the primary hook that adds weight to each individual life you live; grinding your way to a more powerful you isn't always easy.

The upgrades that you are able to afford, though? You want to take them for a test drive as soon as you get them. After all, you were just barely too weak to beat that boss last time, so now that you're just a little more powerful, you're sure to reach much greater heights. So you give up your gold, enter the castle, and do it all over again, hoping to earn enough gold to make yourself even more powerful for next time. It's a cycle that keeps you coming back for more. While death is the end for that character and his or her personal progress through the castle, all of the upgrades, armor, and runes you have purchased remain constant through every play through.

One thing this permanence offers is accessibility. Most games with an emphasis on permanent death draw their enjoyment from the satisfaction of performing difficult tasks. This is fine, but dying and having nothing to show for it can lead to frustration after a while. Rogue Legacy is more approachable than that, allowing you to feel like you're making progress even in failure. Yet it still manages to provide enough emphasis on doing well with only one life to make it appeal to those who yearn for a good challenge.

Much of Rogue Legacy's brilliance lies in that balance. The controls are tight and responsive, allowing you to feel like you are fully responsible for your own actions. When you slice your way through a large room unscathed, or finally vanquish a boss with only a sliver of health left, it's a joyous moment that might cause you to put your fist into the air, victorious, and shout (if silently), "Yes! I did that." But even when things don't go so well, you will probably gain enough gold in death to encourage you to go back for more, unwilling to take defeat lying down.

The randomized traits applied to each of the three heroes you can choose from for each life make for a unique and entertaining hook. While the game's classes are rather typical (one has tons of health, one does massive damage but cannot get critical hits, etc.), traits often mess with you in fun and interesting ways. Your hero may be born with the O.C.D. trait, which gives you MP for breaking in-game objects in order to "clean house." One trait allows you to ignore spike traps. Another makes you fast. Some traits may be more burden than boon, however, like the vertigo trait that forces you to play the game entirely upside down. Still other traits have no gameplay effect at all, such as I.B.S., which merely causes you to fart constantly with no good or bad effect associated with it.

It's from these little touches that Rogue Legacy gets much of its personality. Seeing new traits for the first time can be joyous, even when they ultimately affect you in a negative way. You may die quickly when afflicted with near-sightedness, but at least you spend your myopic adventure laughing as you squint through the blurry visage. At the same time, the way traits mix with classes can force you to play in very different ways than you might normally. Since your selection of classes and traits is randomized each game, you might end up with a hero class you like with a trait you hate (for example, a Barbarian class with high health, except the health and magic pools are swapped). Most of these goofy traits are dumb in the best way possible, and there is a lot of joy to be had from experimenting with them for the first time.

Rarely, rooms don't connect as smoothly as they should. For example, this is the case in rooms which require you to create a platform before going up in the map. When you create the platform, you bounce. Under the right conditions, you will find yourself bouncing just high enough to move to the upper room's screen before falling back down as you can't properly jump into it.

Still, Rogue Legacy's few blemishes are easy to overlook when the game is so good at rewarding persistence. Rogue Legacy is simple yet deep, easy to pick up yet hard to master. Even when its bosses lay defeated, the game continues to heap tons of gameplay onto your PC with a more difficult New Game Plus mode and more secrets to find. It's no wonder why so many generations of heroes spent years exploring this castle, because it's easily worth you spending many hours with it. 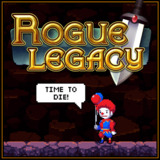