Like an anime version of Star Wars, this big, lavishly produced action RPG is another good reason not to shelve your PlayStation 2 just yet.

Just when you thought the good-old PlayStation 2 had nothing left to offer but a bunch of sequels, along comes Rogue Galaxy, an original role-playing game from the makers of Dragon Quest VIII and Dark Cloud 2. Like those games, Rogue Galaxy features a beautiful cartoonish art style as well as lots of imaginative characters to meet and places to visit. Its frequent battles are much more action oriented than the traditionally slower, turn-based combat that Japanese RPGs are known for. Rogue Galaxy is also quite a big game, featuring plenty of optional areas to explore and minigames to engage in. Yet in spite of all this, the basic flow of the game can get monotonous, making a few too many parts of Rogue Galaxy feel more like a grind that weighs down on the otherwise rousing, upbeat adventure. Fortunately, it's easy enough to look past these parts.

Rogue Galaxy is the story of Jaster Rogue, a good-natured young man who's just trying to make ends meet hunting beasts on his dusty little home planet. He longs for more excitement in his life, and he gets it when one day he has a run-in with an enigmatic man who seems to be a highly experienced bounty hunter. Then, a case of mistaken identity lands Jaster a seat on the Dorgenark, a space pirate ship (complete with sails and everything) that's traveling the galaxy in search of experienced crew. The first space pirates Jaster meets include Steve, who's basically an even kinder, gentler C-3PO, and Simon, a squat little alien-looking guy with a rocket launcher and a thick Scottish brogue. He'll be joined by numerous other characters later on the game, ranging from a downtrodden, dogface warrior to a no-nonsense tribal warrior woman. The characters are likable but somewhat one-dimensional, and the plot makes stabbing attempts at comic relief amid what's a fairly standard anime-style boy-goes-to-space storyline. Rogue Galaxy has an imaginative look and expressively detailed characters, and the quality of the voice work is quite good, all of which makes the story sequences fun to watch even when they're predictable. One nice touch is how most of the story cutscenes are rendered using the game's 3D engine, so your characters will appear differently in them depending on which weapons and outfits you have equipped.

Eventually Rogue Galaxy opens up to let you choose which of your different characters to control directly, but at first, you'll control Jaster as he sets off on his misadventures with the crew of the Dorgenark. His journey will take him to a lush, underdeveloped planet in search of fuel, then a highly industrialized megalopolis planet to get an expired travel visa renewed, and beyond. The quirky premise of some of your early mission objectives helps define the game's personality, but at the same time, it takes a good number of hours before Rogue Galaxy picks up the pace and you start learning about what's really at stake in this story. However, these first hours serve well to let you learn most of the different aspects of play. While Rogue Galaxy isn't a particularly complicated game, there are some important details to the combat that you'll need to get used to.

Combat is central to Rogue Galaxy, in which you'll spend most of your time wandering around in vast, winding environments, running into packs of enemy monsters along the way. These encounters crop up suddenly and with predictable frequency. However, unlike in other RPGs, Rogue Galaxy doesn't switch between an exploration screen and a combat screen; when the enemies appear, they'll be right in the area you're exploring. The action-oriented nature of the battles is immediately apparent, since you're able to shoot as well as slash with your sword almost as quickly as you can tap the buttons on the controller. You can also defend to minimize damage received from enemies, as well as use items and various special abilities called "revelations." Though the combat looks like something out of an action game at a glance, since you do things like attack while jumping or pick up and throw an enemy into his cohorts, the role-playing roots are still visible soon enough. The game pauses whenever you go to use an item or ability, and every now and then you'll need to wait to recover your energy before you can continue your attack. And, of course, you'll see a bunch of damage numbers flying off of the foes you strike.

To its credit, you won't fall asleep at the wheel with this combat system, which is nice and fast but still forces you to think about your foes' strengths and weaknesses as well as your own party members' tactics, much like you would in other RPGs. However, the combat does have a few pacing problems. The numerous boss battles in Rogue Galaxy will force you to spend plenty of time fumbling for items and special abilities rather than fighting. You don't get traditional healing magic in Rogue Galaxy, but instead will rely on large volumes of healing potions and other restoratives, which can instantly restore your characters back to full health or nearly full health.

That sounds powerful, but the combat still is challenging, so you'll often get into fights when two out of three of your characters suddenly get wiped out, so your third one brings them back, then he dies, and so on. Each character fights slightly differently, but you'll control only one of them directly (probably and usually Jaster) as the other two fumble around the battlefield under the barely passable supervision of the computer artificial intelligence. They'll get themselves killed constantly, but at least they'll sometimes volunteer their aid to you in the form of an item or ability that would be useful in the situation. A tap of a shoulder button confirms their suggestion, letting you keep fighting without pausing for the menus so much. It's game over if everyone in your party goes under, but thankfully, save points are liberally sprinkled around the game--you can even teleport between the ones you've visited. Getting a game-over screen can still be a drag, though you'll notice another cool little detail whenever you load your progress: The game offers a brief textual synopsis of what's happening in the story since the last time you saved.

The combat gets to be repetitive after a while. Since you only have direct control over one character, who'll mostly depend on the same basic attacks regardless of which weapons you've equipped, the battles don't feel particularly varied from one to the next. Sometimes you'll run into enemies that demand you use particular weapons or tactics to damage them, but these fights feel more like a chore. However, in spite of these types of shortcomings, all the fighting in Rogue Galaxy can still be quite entertaining overall, especially since your characters will frequently level up and get stronger. Even those characters who aren't in your three-member team at the time gain experience after each fight. Another reason combat in Rogue Galaxy can feel rewarding is that your weapons gain experience after each battle much like your characters will. Also, you'll meet a strange little character early on who can perform an interesting trick that fuses two similar weapons into something stronger. And since all the weapons and equipment in Rogue Galaxy each have a unique look, it can be fun to work your way up to that next seven-star sword for Jaster or some better throwing stars for the cynical space pirate, Zegram.

All the different items and equipment are a very interesting aspect of Rogue Galaxy, overall. Your characters' special abilities are unlocked by placing assorted items onto a special board game-style map unique to each character, so it can be exciting to constantly refer back to this screen as you keep finding various odds and ends in the many treasure chests scattered around the gameworld. Later on, you'll also gain access to a factory, in which you can create new types of items (which then get sent off to different stores that you can buy them from) by playing a surprisingly sophisticated assembly line minigame. You have to create an assembly line using different parts and materials based on the blueprints you've discovered, factoring in how much time it'll take your materials to go through the process before they finally get put together into a finished product.

Rogue Galaxy features some other optional gameplay elements that may well draw you in or away from the main quest. For instance, you can catch different bugs called insectrons during your adventures throughout the galaxy and then pit them in tactical chesslike tournaments against other players. There's also the subtext that Jaster is a bounty hunter, so you'll sometimes get to take on special challenges during battle that earn you coins toward better hunter licenses, and repeated victories will also raise your standings against all those other make-believe interstellar bounty hunters out there. Some bonus dungeons, as well as an entirely new water planet scenario, have been added since the original Japanese release of this game and are there waiting for those who want to soak up more and more hours from this one. It'll likely take you close to several dozen hours just to finish the main quest, and there's still more to do after that.

When a game is going to last you this long, it might as well look good. What with all those fancy new consoles available now, you might have a hard time imagining what it would take for a new PlayStation 2 game to look impressive. So just take a gander at Rogue Galaxy and see for yourself. At times it looks more like a high-quality animated movie than like a game, and for the most part, it runs nice and smooth, with very few loading times there to interrupt your progress through all kinds of different colorful environments. In spite of the visual detail, the environments can feel somewhat empty from a gameplay standpoint, but the ability to jump up and climb onto higher ledges often comes into play to help make Rogue Galaxy's settings feel like more than just big rooms and long, winding corridors. A well-suited, though occasionally repetitive, musical score and plenty of good sounds effects round out the quality voice acting in a game that's an altogether impressive production. One issue with the voice work is that, you'll often hear characters repeat the same lines of banter as you run around. You'll appreciate that the dialogue differs depending on where you are and which characters are in your party, but you won't appreciate hearing the same lines over and over. At least you can toggle this off if it gets too annoying. Also, it's too bad there's no support for widescreen progressive-scan displays, but Rogue Galaxy looks sharp even if you stretch it out on your fancy TV set.

The PlayStation 2 has delivered an almost countless number of high-quality Japanese role-playing games, so all the past competition is really the main reason why Rogue Galaxy doesn't come off as a stunning accomplishment. On the other hand, though, this is a game that does enough differently or better than most of its PS2 predecessors that it's still well deserving of your consideration. 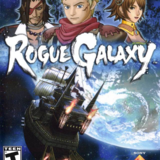