Two years ago, Vicious Cycle released a cel-shaded shooter called Robotech: Battlecry, set in the first of the three Robotech anime miniseries. The developer has followed that effort by releasing another shooter called Robotech: Invasion, based on a different miniseries from Battlecry. While Invasion includes online multiplayer capability, a feature not included in the original, the game's single-player campaign still suffers from the same bland gameplay and mission design that plagued its predecessor. Additionally, the migration away from a cel-shaded graphics engine has taken away the primary charm of the original game.

Invasion is set in a time period that correlates with the third Robotech miniseries, known as Robotech - The New Generation. The conflict centers on a new alien menace known as the Invid, who have colonized Earth for the purpose of harvesting a powerful substance known as protoculture. The Invid, the human armies of resistance fighters, and the human Robotech Expeditionary Force all rely on protoculture to fuel their high-tech powered armor and weapons. In the game, you'll play the roles of various resistance fighters armed with powerful cyclone armor that lets you morph between a humanoid soldier and a motorcycle rider.

While being able to transform between foot soldier and motorcycle rider sounds cool on paper, the implementation leaves a lot to be desired. For one thing, riding on a cycle feels extremely slow. Even after you unlock boost mode and better models of cyclones, the sense of speed you get is more akin to pedaling a bicycle than riding a 21st-century combat bike. What's more, it's much harder to fight while in cycle mode, because your personal shields are deactivated and weapons are limited to slow-moving homing missiles. Since the Invid are both powerful and fast moving, it makes more sense to constantly stay in humanoid mode, so you can track and aim more easily. Therefore, don't expect to be switching back and forth between humanoid and cycle mode while caught in a fight. The way the missions are designed, you'll primarily use your cycle to get from place to place or to quickly escape a timed explosion.

In humanoid mode, you can switch easily between first and third person viewpoints. The heads-up display is reminiscent of Metroid Prime, with a large, round readout that takes up much of the screen with gauges, ammo counters, a compass, and other readouts. Depending on what type of cyclone armor you have, you'll have access to a low-light, night vision mode, thermal vision, and later in the game, stealth camouflage.

You're able to carry two different weapons, one of which must be the modular, protoculture-powered gallant rifle. This weapon is interesting because it improves over the course of the campaign. The gallant starts off as a slow-firing pistol, then becomes a fast-firing automatic rifle, and finally it's fitted with a scope that gives it an extremely powerful sniper mode. The other weapon slot must be a standard projectile weapon, many of which can be picked up from the few human enemies you'll encounter in the game. But for the bulk of the time, you'll rely on your gallant because it's versatile and powerful, and protoculture ammo is plentiful as it's dropped by all fallen Invid.

You can lock-on and track most of your enemies by holding down a shoulder button. You can still make fine adjustments on your aim by using the right thumbstick; this is an important tactic, as the Invid are particularly vulnerable in the eye. Nail an Invid trooper in its eye, and it'll die a lot faster. There's also other location-specific damage--concentrate fire on an arm or mounted gun, and you'll see that appendage fly off as it is hit.

Despite these nuances, there isn't a huge amount of variety in the enemies or missions you do. Escort mission, check. Search and destroy mission, check. Rail shooter level, check. Overall, Robotech: Invasion's brief, eight-hour campaign plays like a standard by-the-numbers shooter. There's a plot twist near the end where you're able to make a choice that affects the ending and how the final boss battle plays out, but other than that, there isn't much to distinguish Invasion's gameplay from any other shooter out there.

Aside from the campaign, Robotech: Invasion offers online multiplayer for up to eight players over Xbox Live or PlayStation 2 online. There are four standard game types, including deathmatch, team deathmatch, capture the flag, and a capture-and-hold-style game mode called protocapture. While it can be fun for a little while to switch back and forth between cycle and humanoid modes as you battle your opponents, the novelty wears thin quickly, making Invasion just another in a long line of multiplayer shooters vying for your attention. The other main problem is that it's just about impossible to find a match online, as there are usually no servers available at any given moment. And while the developers have thoughtfully included system link as an option for both the Xbox and PlayStation 2 platforms, there is no split-screen multiplayer mode, so it's rather difficult to just get in a quick and dirty deathmatch.

Graphically, Robotech: Invasion is somewhat of a disappointment, especially after the snazzy-looking Battlecry. For whatever reason, the developers migrated away from cel-shading, giving Invasion a standard 3D engine. The overall look of the game is pretty inconsistent. While most of the Invid soldiers look great and animate nicely, the amount of detail on the cyclone troopers leaves something to be desired. The transformation animation between humanoid and cycle mode is choppy, and all the environments look fairly bland. The blandness is exacerbated in many levels because of the darkness. While this forces you to use your night vision mode, looking at the game in a monochrome green doesn't enhance the look of a game that already feels drab and uninspired.

On the sound front, the game has some strengths that are undercut by its bad voice acting. The sound effects of the weapons and explosions are good, and they are reminiscent of the animated series. It's also noteworthy that Jesper Kyd composed the music in Invasion (his previous work includes music for the Hitman games and Freedom Fighters). While the brooding, military-style scores he put together for the game are good in general, it's far from his best work.

As with its predecessor, Robotech: Invasion fails to live up to the strength of its license. An uninspired game design, drab presentation, and a nonexistent online community make Invasion difficult to recommend to anyone but the most ardent Robotech fans. For the rest of us who have been eagerly awaiting a great Robotech video game, we'll have to continue to be patient. 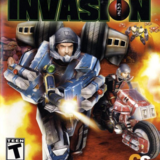 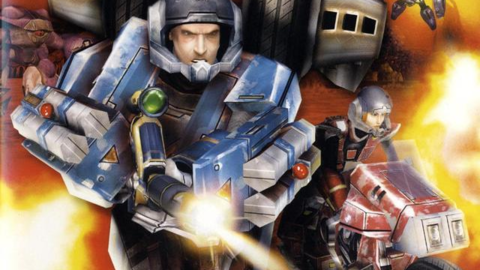