Road Rash: Jailbreak puts the fun back into the Road Rash series, reemphasizing the fighting while still maintaining a good racing experience.

Electronic Arts has been making Road Rash games for close to ten years now, and with only a few exceptions, the series has remained true to its motorcycle racing, punching-and-kicking roots. While many hard-core RR fans were disappointed with the series' last PlayStation appearance, Road Rash: Jailbreak fixes what was wrong with Road Rash 3D and delivers a fast, fight-filled racing experience.

Along with the return to the roots of the series comes an all-new storyline. In the game's main mode, you'll ally yourself with a gang and advance through its ranks. You advance by placing third or higher on a track. As you complete tracks, you'll earn points for racing and fighting well, and these points in turn grant you extra weapons and nitro boosts. Five-O mode lets you play the role of the police. In this mode, you advance either by arresting thugs to fill your quota or by popping one flashing suspect. You make arrests simply by knocking enemies off their bikes, but it's significantly harder to knock people off in this mode. The game also includes a time-trial mode and several multiplayer modes, like cops and robbers and side car.

Graphically, the game isn't perfect. Get more than three or four bikes onscreen and the frame rate takes a huge nosedive. But the bikers and the bikes are modeled well enough, and the game is still very playable. The sound is good, but there's a real lack of varied racer taunts. Gameplay is really what sells the game. The control, particularly with the dual-shock controller, is top-notch. The top buttons control all of your attacks, while the two analog sticks control your throttle and steering. You can also pull off a wheelie, which can be used to launch yourself up and over oncoming traffic. Just don't try to pull a wheelie over a truck....

There are a ton of tracks in the game, but aside from different race locales, the track design isn't too different from track to track. Every track has the same forks in the road, and an onscreen arrow tells you which direction to choose. It's not uncommon for a track to have four or more of these forks, and they really make each track feel generic.

Overall, Road Rash: Jailbreak puts the fun back into the Road Rash series, reemphasizing the fighting while still maintaining a good racing experience. If you're into beating motorcycle punks and cops off of their bikes with chains, bats, crowbars, or your bare fists (and hey, who isn't?), then this is definitely the game for you. 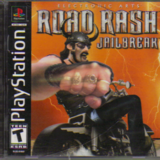