Yes, hitting people while driving a motorcycle is that much fun.

At its best, the Road Rash series is the perfect blend of motorcycle racing and slapstick combat. The last game in the line, Road Rash 3D for the PlayStation, leaned much more toward racing than fighting and ignored the fondly remembered two-player mode seen in Road Rash 2 for the Genesis. It was a good enough game; it just wasn't really Road Rash.

Road Rash 64, however, created by THQ and EA-alum Don Traeger's Pacific Coast Power & Light, is a complete rethinking of Road Rash 3D, rather than the N64 port it was once thought to be. Beyond all the extras it offers over its PlayStation cousin, it returns combat squarely to the fray, making Road Rash feel like Road Rash once again. This may sound elementary, but fans of the series will appreciate what this means for the gameplay.

Fans will also be glad to hear that there's more fighting in RR64 than in any previous Road Rash game, and this time you're even graded on your pugilistic performance at the end of each stage. Causing multiple accidents and resisting arrest earns you a modest cash bonus on top of the money you garner for placing in the race. New weapons, such as pool cues and cans of mace, now add to the familiar RR arsenal of cattle prods, nunchucks, and crowbars, with power-ups such as a 4X damage modifier making an appearance as well.

Weapon or no weapon (fists and feet), the in-game fighting is great fun, too. In fact, it almost supercedes the racing element entirely. You'll begin discovering combinations that work well against your opponents, like using the cattle prod to stun a racer and then kicking him into a tree or into the path of an oncoming car. As you come to know the different racers, all of whom have different names and personalities, a full-on assault becomes truly satisfying. One rider, Derrell, consistently came after me, vexing me so much that I laughed maniacally whenever I sent him careening into a sign or building or just launched him off his bike.

And physics are a big part of what makes slamming face first into a stop sign different from plowing broadside into a Mack truck. The physics in RR64 are, if not always realistic, at least intensely comical, as the bikes and riders go flying in fairly amusing ways. In one instance, I watched a driver hit a tree, then he and his bike - independently of each other - went ping-ponging back and forth several times between that tree and a nearby light pole. In another case, I hit an obstacle right before a tunnel, flew into the air, landed on the other side of the mountain, and was able to keep going and rejoin the race.But don't think collision with the aforementioned obstacles is optional. As you get further in the game, the traffic gets heavier, the enemies get smarter, the tracks get longer, and the cops appear with greater frequency. On some tracks, cops outnumber racers; thanks to them, just completing these courses is a feat - something made obvious when the collective competition has long since been busted, leaving an entire police department trailing you.

One way to evade the increasing AI of your CPU opponents is to enlist your human friends as competition. The multiplayer modes let you compete against up to four players at once on tracks you've raced in a single-player or special multiplayer-specific level, such as a sewer, toxic chemical plant, or construction yard. The multiplayer-specific levels should be avoided since they feel extremely poorly designed, and every bike - except for the scooters - goes flying at every little jump, making you spend more time in the air than on the track. But while the earlier tracks from the single-player mode are simply too short, the longer tracks are great to race on, giving you plenty of time to beat the hell out of your friends. As in PC first-person shooters, taking on your friends is much more fun than fighting the computer, and RR64's multiplayer shines on these tracks.

Multiplayer aside, there are a few more problems with Road Rash 64 in general, such as the fact that without the Nintendo RAM Pak, the graphics are a blurry, muddy-looking mess. Using the RAM Pak and bumping the game into hi-res mode cleans it up quite a bit, but this action then retards the frame rate in favor of nice visuals. The best solution is to set the game to the letterbox mode, which trims the top and bottom out of the frame, but provides clean visuals and a speedy frame rate. In this mode, the graphics are still not great, but they're not hard on the eyes either. On the audio side, the soundtrack has several songs from Road Rash 3D, which is impressive on one hand because they've managed to cram them into an N64 cartridge. On the other hand, this is unfortunate since the songs weren't that great to start with, they are repeated constantly, and they have an overall sound quality that is pretty low. But Road Rash 64 does manage to prove the axiom that graphics and sound take a back seat to gameplay. It's a game worth completing, worth inviting your friends over to play, and worth owning. Yes, hitting people while driving a motorcycle is that much fun. 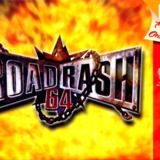 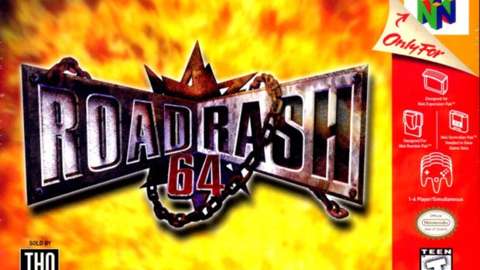 Yes, hitting people while driving a motorcycle is that much fun.