You'll enjoy this fascinating and intricate role-playing game in spite of its troublesome combat and scattered bugs.

If you judge Risen on its first act alone, you may be convinced that a better title for this complex role-playing game would be "Errand Boy." But while you spend many of the early hours as a shipwrecked message courier, you should stick with it, because things do get better. You explore dark caverns, clash with pirates over buried treasure, stab lizardmen in their faces, and earn the help of a furry friend with a talented nose. Some of Risen's issues stay with you up to the end; there's no escaping the problematic combat and a number of bugs and presentation glitches. But a large and memorable cast of characters and an array of multilayered quests will keep you pushing forward. While it's too technically inconsistent to rise to the top of the genre, Risen still provides plenty of enjoyable adventuring for RPG lovers yearning for a game they can get lost in.

The setup may sound familiar: You are a nameless protagonist washed ashore on a remote island after a disaster at sea. Eventually, you find yourself in a dank swamp ruled by the infamous Don Esteban, a domineering rogue at odds with both the local monastery and the leadership of the island's primary coastal town. Risen's first act drones on endlessly, sending you from one fetch quest to another (distribute these potions; deliver this message; find me some weeds) while confining you first to the swamp, then to the city, and then to the monastery. The downside is that the early hours are tedious and light on action. While island politics eventually play a large role in gameplay, there's nothing initially compelling about the faction struggles, and it takes a while before the world opens up and the story takes hold. The upside to this slow start is that you get to know the world's inhabitants. The characters make an impression, such as the stubborn and manipulative Don, the local barmaid afraid to reveal her secrets, and a mother worried about her missing sons. When a greater threat is eventually exposed and the story expands, you realize that you care about them and their fates. By the time your real enemy is revealed, you'll embrace your role as hero, because you know how desperately these people need one.

Some strong voice acting helps inspire this kind of empathy. Some of the voice-overs could have used a jolt of energy, including that of the main character, who often sounds uninterested. However, most of the acting is quite good, which is a wonderful thing, considering that almost every line is spoken as well as displayed on the screen. As your standing within your faction rises, characters will offer words of encouragement and react to your presence more positively, which lends a nice sense of social progression. Even a few of the quests themselves display personality, such as one in which you place a severed cow's head in someone's bed (an amusing reference to The Godfather). The main story regarding the forces responsible for a bunch of temples rising to the isle's surface is standard fantasy fluff, but the peripheral touches keep you involved and make the island come to life.

Risen's greatest strength is the number of choices it gives you, and how well it balances them. Your choice of faction is the most obvious example of the decisions you face, and it affects which quests you can take, the skills available to you, and even how the world evolves. But even many side quests can be approached in multiple ways. Do you betray a friend and steal a pirate's bounty, or do you remain loyal and fight for your due? Do you scheme with scoundrels, or do you turn them in? These kinds of choices don't pervade the later portions of the game, but even when progression becomes more linear, the questing is still enjoyable. Not only will finding the scattered teleport stones complete a quest line, but these magical objects will make getting around the world a lot simpler. And the relationships you build with other characters add extra flavor. Digging up graves looking for clues is fun on its own because you get to explore various parts of the island; knowing you're performing the task for a character you like sweetens the deal.

Progression isn't limited to leveling, which occurs relatively slowly. As you advance, you visit trainers who teach you the skills needed to get the most out of your exploration. Eventually, locked chests won't be a problem for you as long as you improve your lock-picking skills and have enough picks (or the right spell or scroll). Some trainers teach you how to skin creatures; others help you with your alchemy skills so you can create potions out of herbs and roots, or teach you to make swords and jewelry. You also train up your combat skills and related stats, such as strength and dexterity, by visiting helpful citizens. Risen offers a lot of flexibility as a result, and the side activities are varied enough to keep you interested. For example, smithing a new weapon is a multistep process that involves using an anvil, a trough, and a grindstone (though it's admittedly annoying when you have to wait for a non-player character to finish using the tools first). Picking a lock entails entering a sequence of key presses in the correct order, and you can use a frying pan to cook raw meat over a campfire. These activities are simple on their own, but they're nice diversions between temple excursions and result in helpful items and equipment.

There is no minimap, and the world map and various regional maps don't offer much in the way of specific information or important waypoints. However, this gives you a reason to explore the various nooks and crannies, which is mostly a pleasure in Risen. You scavenge caves searching for ore deposits and treasure chests to break into, discover shortcuts by transforming into a tiny snail-like creature, and pull unmarked rings to open hidden passages. You'll get good use out of abilities like levitation, which lets you hover over spike traps (though inexplicably, the spikes still stick right up through you, but they don't do any damage), and telekinesis, which lets you flip levers from afar. You'll remember your first glimpse of an ash beast, a giant simian creature with a ferocious temper--and the first time you take one on and win. Unfortunately, you'll also remember crossing a particular grate for the first time, only to discover that it's a fire trap that needs to be shut off. Most of Risen's surprises are welcome, but a few--treasure chests that spring traps on you and trap doors that are hard to see in the poorly lit dungeons--are not.

Even with the best weapons, spells, and armor equipped, you always feel surprisingly fragile as you explore scattered ruins and volcano innards. You eventually lord over those pesky stingrats and have a fighting chance against reptilian priests and undead beasts, but even at higher levels, you won't feel all that powerful. Especially during the final act, almost every encounter is a matter of life or death, so expect to use the quicksave and quickload buttons frequently. Unfortunately, Risen's combat doesn't offer enough precision to let you feel in control of your own destiny. The big problem is the bizarre automated target lock that focuses your view, and your attacks, on a single enemy. It's too sticky, particularly when you're blocking, and makes fighting multiple enemies in battle a hassle. The game might target a different foe than the one you mean to attack, giving another enemy a chance to flank while you adjust--and you'll grit your teeth when your sword harmlessly clips through a closer enemy because the one behind it was targeted. You're meant to play defensively, but enemies are unpredictable, and it's hard to get a feel for the right time to strike back. Fortunately, you're occasionally accompanied by a companion of your own, which makes battles a lot more fun. Spells, scrolls, and ranged weapons also help ease these woes, but while you get used to the melee combat in time, it's too sloppy to fully embrace.

Awkward moments aren't limited to combat. Risen doesn't possess the substantial collection of frustrating bugs of developer Piranha Bytes' previous effort, Gothic 3, but you will run into any number of glitches and other oddities--enough of them to make the game feel unfinished. There are all sorts of dialogue and voice-over issues. Lines may be spoken out of order, the wrong character may speak the displayed dialogue, or the spoken line may be completely different from the written one. There are character labeling inconsistencies: An ogre labeled "Dork" is referred to in dialogue as "Drok," while in another similar circumstance, the two names given to the same character aren't even close. Other technical flaws are more annoying. For instance, a character that joined us on a quest was later classified as an enemy and ordered to attack by his swashbuckling boss. He would continuously attack but could do no damage nor take any, following us around and swinging his sword like a lunatic because the game classified him as both friend and foe. You might walk through a doorway only to find yourself on the roof, try to drink from a water barrel but get stuck on a rock, or sneak up a stairway only to have a tiny step at the top knock you out of stealth stance and trigger a nearby guard. Risen's nuts and bolts are in place, but they needed tightened up. As a result, the framework feels a bit rickety.

Risen does not boast cutting-edge visual technology, but it is an attractive game, if not quite a standout. Green meadows look lush and appealing, and you can practically feel the stagnant mist on your skin as you wander through swamplands. The over-dark dungeons need a touch of atmosphere; they cry for better color contrast and more effective lighting, and you'll cry for them too when you miss the indications of a trap due to the dim surroundings. Yet other areas look terrific, such as looming cliffs dramatically connected by a suspended bridge. The world offers few visual surprises--Risen looks like a typical fantasy game--but environments are delivered with enough flair to mask the scattered presentation blemishes. The same could be said about the sound design. The music is standard for the genre: pretty enough to set the right mood and not grate, but not powerful enough that you'd want to buy a recording of the soundtrack.

Risen's flaws are notable. The unsatisfying combat lacks precision and flow, and bizarre quirks are common enough to make you wish the game had spent more time in development. But these problems aside, the game makes you care about its characters, which gives its main quest a sense of urgency few RPGs can match. It takes time to make an impression, but give it a chance: Risen will grow on you, and when it does, you may very well be hooked. 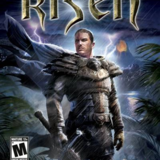 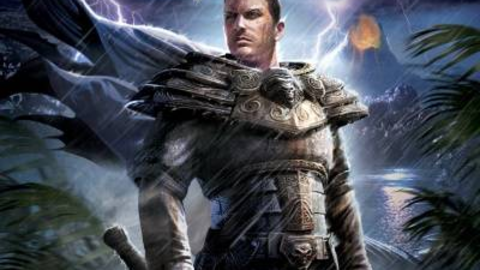 Risen is an RPG game set in a medieval world, unfolding over four engrossing chapters.