Retro/Grade succeeds at bringing a fresh take to the rhythm genre and filling it with sensory pleasures, but a lack of music means it outstays its welcome sooner rather than later.

Have you ever flawlessly completed a side-scrolling shooter? What if you were asked to flawlessly play a game backward, to the beat of electronic music? What if the price of your failure were the collapse of the space-time continuum? Such is the premise of Retro/Grade, a unique rhythm game with a lot of charm, some great tunes, and tons of visual flair, but a dearth of music prevents the fun from lasting very long.

Retro/Grade begins at the end. You put a couple of shots into the final boss, the day is saved, the credits start rolling…and then everything starts to go backward. From then on you have to unplay the entire adventure of space hero Rick Rocket, undoing his every shot and redodging every enemy attack. Everything is happening to the beat of the level's music, so you're not just playing a shooter in reverse; you're also playing a rhythm game. You can think of the playing field like Rock Band's note highway turned on its side. Where there would be notes, there are now Rick's reversed weapon projectiles, and you move up and down the space lanes to catch them with a well-timed press of the X button. The number of lanes varies by difficulty, starting with only two for the beginner level and going up to five for the tougher difficulties.

Failing to undo any of Rick's shots or getting hit by enemies causes damage not to your ship, but to the space-time continuum. If it's destroyed, the game is over. To help fix your mistakes, though, you earn Retro/Fuel that allows you to go backward--er, forward?--in time. You lose any multiplier you may have built up, but it helps you overcome tricky sections in which you might otherwise die. Every lane is color-coded the same way a Guitar Hero game would be, with the color of every friendly and enemy projectile giving you a clear signal as to whether you want to be in that specific lane or avoid it.

It's amazing how well these many elements works together. After the rhythm game fatigue that set in for most people after the market was flooded with music peripheral games, Retro/Grade's unique take on the formula helps the action feel fresh. You're doing many of the same actions, albeit with a controller instead of a fake instrument (though you can, in fact, bust out your plastic guitar and play Retro/Grade that way), but it feels like a much different experience. It helps that the electronic music is catchy and the visuals are packed with pleasing colors and animations.

However, as sharp as the visual design is, it occasionally does interfere with your ability to see what's going on. There's such an explosion of light on the screen at all times--from pulsating backgrounds to the tons of projectiles onscreen at once--that it can sometimes be too easy to lose track of what you're trying to hit and what you're trying to avoid, most notably when both friendly and enemy bullets look the same. This is most problematic when using the overthruster power, which is Retro/Grade's equivalent of star power. When using the overthruster, all the color in the game becomes blurred. This looks awesome, but it can be frustrating to try to differentiate different aspects of the level unless you already have it memorized. You might say this merely adds challenge, but it's the kind of challenge that's typically more frustrating than satisfying.

The campaign's 10 levels, played from 10 down to one, won't last long and can easily be finished in a single sitting. There are reasons to go back for lower scores (yes, lower--you're playing down from a high score and trying to get closer to zero) to beat your friends on the leaderboards or to try to master the higher difficulty levels, but you will probably spend most of your time in the challenge mode. There, you are given a map full of challenges to complete, ranging from short and simple (such as getting to a 4x multiplier) to more unique (playing a song at 140 percent speed) to more challenging (catching every projectile in a song when it's close enough to you for maximum score). Completing certain challenges unlocks different extras, such as new ship designs (many of which are inspired by other indie games, including Minecraft), music, and artwork.

Retro/Grade's lack of levels does tarnish some of its luster. The overall quality is sufficient, and with more than 100 challenges, there are enough tasks to keep you busy. But all those challenges are based on the same 10 levels that are found in the short-lived campaign. That means you play the same 10 songs over and over again, and while they're great songs, all the psychedelic style in the world can't keep those 10 songs fresh forever. The familiarity doesn't quite breed contempt, but it does make the experience much less exciting as time goes on.

But that's a fairly simple problem to overlook for an inexpensive downloadable game. Retro/Grade has a lot to offer, especially to those who already have a fondness for rhythm games. All of the pieces come together nicely for an enjoyable experience for both mind and ears, but it's best played in short bursts so you don't get tired of it too quickly. 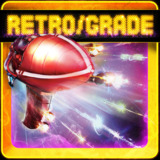 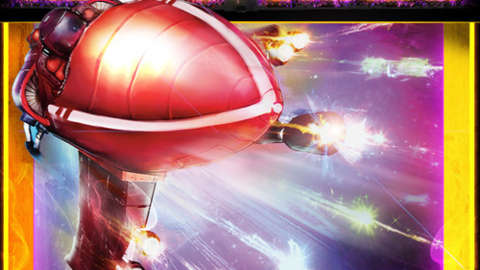 Retro/Grade is an innovative game that fuses the white-knuckle thrills and over-the-top visuals of a shooter with the broad appeal of a rhythm game.