Resistance: Retribution successfully migrates the series' exciting action to the portable platform, with only a few bumps along the way.

Resistance: Retribution is the first portable outing for Sony's grim alternate-history franchise. The Resistance series, like many other shooters, has thrived on the dual analog-stick controller of the PlayStation 3, and at first glance the leap to the PSP's single analog stick and face-button control scheme may seem a bit daunting. However, from the first moments of Resistance: Retribution, it is clear that the fast-paced, intense action of the Resistance series is well represented here thanks to clever controls, a powerful arsenal, and vibrant levels. Despite being less epic in scale than its forerunners and having a few rough edges, Resistance: Retribution is a remarkably successful shooter that looks great and is a lot of fun to play.

The key to Retribution's success is the control scheme. You use the analog stick to move, the face buttons to aim, the shoulder buttons to fire, and the D pad for miscellaneous actions. Aiming precisely with four separate buttons is an unwieldy task, so to smooth things out, Retribution features an aim-assist window. This is a bracketed targeting area in the middle of the screen. If you frame your enemies within the brackets, your reticle will automatically target them and you can blast away without having to constantly tweak your aim. You can easily switch between bracketed targets with a tap of the face button, and your reticle will stay locked-on as you strafe back and forth as long as you keep your enemy in the window. It is an elegant and intuitive solution to the aiming problem, and though it may sound like aim assist would make the game too easy, there are a number of factors that keep everything in balance.

The first factor is your relentless enemies. They fill the air with projectiles and advance on you aggressively. Many can be vanquished with a steady stream of aim-assisted bullets, but others require you to look down your sights (temporarily removing aim assist) and shoot them in their big, nasty heads. Some of the larger enemies are much tougher, so you'll need to use your weapon's powerful secondary attack or, better yet, use a bigger weapon. The second factor that keeps the action tense is that these secondary attacks, as well as big guns such as the rocket launcher, do not use the aim assist. This requires that you toggle your zoom (using the slightly awkward D pad up button) and work a bit harder to get your aim right. Fortunately, the large groups of enemies or towering monstrosities that you'll be firing at present a sizable target. There's a great balance to the combat: The aim assist does enough to keep the action going at a good clip, but it doesn't do so much that it takes away the challenge or the fun.

Of course, the action isn't all about aiming and pulling the trigger. Maneuvering around the levels is just as crucial to your survival. If you run up to a low barrier or a protruding wall, you'll slide into cover and (hopefully) out of the range of most Chimeran weapons. Sometimes you can accidentally slide into cover when you don't want to, and then the magnetic pull that was once your savior becomes your bane. Slowed and exposed, you have to quickly pop out if you want to survive. This can be aggravating if you are just shy of a checkpoint, but for the most part Retribution takes the Resistance series into the realm of third-person action successfully. There are even some swimming and mech-piloting sequences that provide an exciting, though generally easier, change of pace.

Retribution also breaks new ground for the Resistance series with its brash protagonist, James Grayson. This British soldier is court-martialed by his countrymen and fights alongside the French for much of the campaign, giving him an excuse to lob obscenities and vulgar epithets at characters of both nationalities. His quips oscillate between cliched and hilarious, but it is nice that, unlike Nathan Hale and the cast of the two previous games, Grayson and the supporting characters from Retribution have actual personalities and motivations. The story, told through competent cutscenes and serviceable (but occasionally spotty) voice acting, focuses as much on their relationships as it does on their struggle against the Chimera. The plot twists are often predictable, and the scope of the characters' struggle feels less epic, but the intriguing conclusion and Grayson's loutish attitude make it a worthwhile chapter in the Resistance saga.

Taking Retribution online lets you fight in battles with up to seven other players through an ad hoc or infrastructure connection. The five game types cover the multiplayer basics: Free-for-All, Team Deathmatch, Capture the Flag, Containment (territory control), and Assimilation (one team converts opponents to their side by killing them). These are filled out by a good feature set, including a ranking system, clan support, and chat capability for those with an appropriate headset. Games generally run smoothly and, though there's nothing particularly unique here, Retribution's multiplayer is still rock-solid fun.

What is unique is Retribution's ability to connect to Resistance 2. With both games fired up and both systems connected via USB cable, you can "infect" your PSP. This gives Grayson the glowing eyes and black uniform sported by Nathan Hale in Resistance 2, and endows him with regenerative health and the awesome magnum that shoots exploding rounds. This novelty lasts as long as your PSP is powered on and makes you a bit tougher without significantly changing the difficulty level. The other feature lets you play Retribution with your PS3 controller. This makes playing the game more comfortable, and nixes the aim-assist window in favor of a reticle. Some may prefer this traditional setup, but it's practical only if you have the video-out cables to play your PSP on your TV. Even if you do, Retribution looks so good that it is a shame to blow up the image and stretch it out. The different environments that you travel through are uniquely designed and feature a rich color palette, and the dramatic lighting and smooth animation let the action shine brilliantly.

Allowing the action to shine is what Resistance: Retribution does best. The slick controls perform admirably with only a few minor stumbles, letting you flex your impressive arsenal as you battle through hordes of fiendish enemies. The scope of your journey is a bit narrow, and Grayson may very well offend gamers with ties to France (or England, for that matter), but the excitement and intensity packed into Resistance: Retribution are undeniable. 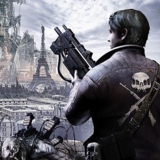