There's no real reward to playing Survivor, and the Resident Evil universe would be better off without it.

Capcom's Resident Evil games are generally acknowledged as the games that defined the survival-horror genre, so it's no wonder that fans of zombies and gun-wielding women got excited when they heard that Capcom was working on another RE game. But this time it's a little different. Capcom's scrapped the third-person perspective found in every other Resident Evil game to make Resident Evil: Survivor (Biohazard: Gun Survivor in Japan) a first-person gun-blasting adventure.

While you may have heard Survivor described as a Resident Evil version of House of the Dead, that description really gives the wrong impression. The major difference from any plot-based shooting game is that Survivor doesn't run on a track - you have the freedom to move about and explore the universe as you see fit. Imagine a Resident Evil game that runs on the Echo Night engine, and you'll get the picture. Survivor tries to be more than just a shooting game - it's got an odd plotline featuring no major characters from any of the past games and some puzzle-solving elements - but at its core it's a bland shooter that limits itself with a poorly designed control scheme.

Survivor suffers from a good number of control issues. Like in most first-person exploration games, there's no strafe, and navigating corners can be taxing. Once you run into a group of enemies, you simply stop moving and start shooting. And the actual shooting is a real disappointment. It doesn't appear that shooting zombies in vital areas such as the head or chest hurts them any more than grazing their elbows does, and the guns that you get are extremely weak. Not only do you usually have to pump six rounds into your average zombie, but those six rounds take forever to fire because Survivor limits how fast you can shoot. Unlike most shooting games, Survivor has a strange rate-of-fire restriction on most of the guns found throughout the game. While the better guns eventually fire faster, no gun fires as fast as you can hit the fire button. This makes shooting extremely boring, as you're forced to level your sights at a target and slowly wait for your gun to catch up with the controller. It's unfortunate that Survivor takes advantage of its own gameplay flaws to make the game unnecessarily difficult. Since turning is such a slow process, you'll find that the most likely place for a zombie once you enter a room is directly to your back, giving the undead an excellent chance of harming you before you can even see him. On top of that, enemies like to crouch or roll under your field of vision, and since you can't control where you're looking, you're incapable of shooting an enemy at your feet. Most of the time you'll simply stand in place and yawn as you slowly plunk bullet after bullet into your enemies. It should be noted that while the Japanese release of Resident Evil: Survivor had light-gun support, this feature is absent from the US release.

While Survivor does deviate from the standard third-person Resident Evil formula, it still feels like a Resident Evil game. All the enemies you've come to love from the series are here. It's not uncommon to run into giant spiders, lickers, zombies, demon dogs, and even a handful of tyrants. Unfortunately, there are really no good puzzles in Survivor. Most tasks involve you finding a key to open a door two rooms away. You'll also find that zombies have gotten extremely good at hiding, as many times you'll enter a room you just left to find even more enemies waiting for you. Interestingly, Survivor does feature multiple paths. At the start of the game you can go one of three different ways, with more alternate paths branching off from there. All the routes ultimately lead to the important places, such as the town's courtyard or Club Paradise, but the different scenarios go a long way toward breaking up the monotony of the game.

You can manage all your items in your inventory screen, just like in all the other Resident Evil games. Unfortunately, you really don't run into all that many items to manage. Your inventory screen usually just holds your different guns and health-recovery items, with the occasional key or box of ammo. But while the inventory screen was a nice touch, basic tasks such as reloading your clip are amazingly tedious because you have to switch to your inventory screen and reload from there. An option to manually reload without having to switch screens would have been nice. Survivor isn't a pretty game. All the backgrounds are rough and pixelated and look even worse once you get close to them. The characters aren't much better. All of the characters in the game look extremely simple, and a definite lack of detail plagues the character models - some enemies simply look ridiculous. There are only three or four different zombies running around, and the game seems to use them with no sense of discretion. On top of that, zombies stumble about in an incredibly unrealistic manner, and the animation is simply terrible. After you shoot them a few times, the zombies start to waver and fall, but if you shoot them again they immediately stand up again, giving you the feeling that some frames of animation are missing. In addition, the engine moves around in a horribly choppy manner and at times suffers from intense slowdown.

The sound is disturbing. Most of the game features dark, brooding music, but several times during the course of the game the music suddenly shifts and a long, high-pitched noise fades in for several minutes before it fades back out. On top of that, the sound seems to be plagued with bugs, and I was constantly hearing ridiculous sound effects, such as a bullet firing when I was walking or the noise from the inventory screen when I was shooting. That combined with the sheer repetition of hearing zombies moaning every few minutes makes this game better without the audio.

Resident Evil: Survivor tries its best to be a fusion of two drastically different genres, and it unfortunately limits itself with difficult control and tedious gameplay. There's no real reward to playing Survivor, and the Resident Evil universe would be better off without it. With a ridiculous side plot that seems to have no real tie-in with the carefully crafted events of the past Resident Evil games, fans of the series who want a first-person perspective should simply forget about this game and pick up Code Veronica. 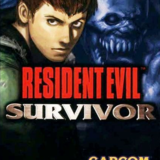