Outbreak was an interesting experiment a year ago, but dealing with the archaic gameplay conventions of File #2 today feels a little like taking a step backward.

Roughly a year ago, Capcom delivered its first attempt at bringing the Resident Evil series online with the flawed but mostly playable Resident Evil Outbreak. Now it's back with more of the same in the aptly titled Outbreak File #2, which is essentially a full-priced expansion pack for the original game that has new scenarios, some minor mechanical improvements, and not much else. Outbreak was an interesting experiment a year ago, but since we've now seen the Resident Evil series finally move on with its incredible fourth installment, dealing with the archaic gameplay conventions of File #2 today feels a little like taking a step backward.

That's not to say File #2 is worse than the original Outbreak. If anything, you could call it more of the same. The premise is certainly familiar: Eight citizens of Raccoon City have survived the zombie outbreak and must work together through a series of dire, unrelated situations to defeat the walking undead and make their way to safety. They come from all walks of life. For instance, there's the token police officer, Kevin, who starts each mission equipped with a handgun; Yoko, the hapless student whose backpack affords her double the inventory space; Mark, the burly security guard who's good with melee weapons; and Alyssa, the newspaper reporter who's handy with a lock pick. Each of the eight characters is different enough that who you play and who you take with you into a scenario makes a significant difference.

File #2 plays identically to the first Outbreak, which is to say it plays pretty much like every Resident Evil ever made (except for RE4). You'll move through each dilapidated environment looking for weapons and health power-ups to keep you alive, while searching for items and clues that will help you solve puzzles and escape all the madness. The classic Resident Evil gameplay has always been methodically paced, with a lot of swapping items around in your inventory and readying yourself to take a shot at encroaching undead threats. Like its predecessor, File #2 feels like a mix between an adventure game and an action game, since you're still required to muck around in your inventory, as well as read lengthy files left behind by survivors, all while the menacing creatures of Raccoon City are still stalking you.

A game like Outbreak File #2 demands that you consider everything about the environment and the clues and items you've picked up as you figure out how to solve puzzles and proceed. So it's vexing that the action keeps running in the background while you're trying to combine herbs or study the map for a door you may have missed. It's obvious why this is necessary in the online portion, because it wouldn't be much fun if you had to wait every time someone wanted to reload a pistol. But it would be nice if the offline mode let you off the hook a little, allowing you more freedom to explore and puzzle on your own without having to rely on occasionally incompetent artificial intelligence-controlled allies.

Outbreak was presumably designed from the get-go as a multiplayer experience, and in light of that, its biggest flaw was the difficulty of communicating with the people you were playing with. Unfortunately, Capcom hasn't done much in the last year to alleviate this problem. File #2 again requires you to talk to your teammates primarily through an assortment of canned phrases that cover the most basic areas, like help, go, and thank you. At least this time around, you can tell people you're sorry or announce the name of the room you're currently in. While this style of communiation is at least somewhat unique, it's just not a better alternative to the headset or keyboard support you're probably used to having in most other online games.

At least the scenarios on offer in File #2 are reasonably imaginative, taking you from familiar locations like the Raccoon City Police Department and the zoo (wait until you see what lurks there) to a creepy old hospital out in the woods. As in the first Outbreak, there are multiple ways to get through each mission, depending on the difficulty level and which characters you're using, and since you gain points to unlock movies, alternate costumes, and so on by performing well, diehard fans will find some reasons to go back and play each mission more than once. The designers have granted you a couple of new tricks to help you survive, too. It's now possible to move while shooting, which can come in handy when you need to back away from a rapidly approaching monster. You can also pick up items while you're near death and crawling on the ground. If you've played the original, you know that once you're down on the ground, finding a much-needed health boost is the only thing that will bring you back from the brink. These slight additions are nice to have, but they don't make up for the fact that the gameplay is just too clunky when compared to more-contemporary fare.

At least File #2 is quite nice-looking, just like its predecessor. The eight characters are realistically modeled and animated, if you can get around their peculiar resemblance to certain Hollywood stars. More importantly, the real-time environments are highly varied and feature more random detail than you'd expect to see in current-generation games. Most of each scenario's locations are entirely different--no two rooms look the same--and you'll see tons of little set pieces, like cluttered desks and monstrous plants, all over the place to bring the levels to life. All this detail comes at a price, though. The load times aren't painfully long, but they're frequent enough that they can get annoying after a while. Luckily, you'll again be able to install the game to the PlayStation 2 hard drive, if you own it, which will reduce load times considerably.

A year later, File #2 is so similar to the first Outbreak that only those who really enjoyed that game will find a lot to like in its sequel. The basic concept is firm, but the execution is again too awkward for the typical action adventure fan to get into without a hassle. It would have been nice if Capcom had done more to smooth the flow of the gameplay, especially in light of Resident Evil 4's smashing success, but we'll just have to wait until the next time around for that.

View Comments (0)
Back To Top
6.6
Fair
About GameSpot Reviews 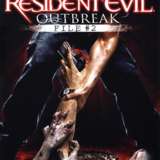