Red Faction II can offer some good shooting action for fans of the genre.

Filled with the sort of over-the-top violence and cheeky futuristic propaganda seen in Paul Verhoeven's popular sci-fi films Robocop, Total Recall, and Starship Troopers, Red Faction II is a sequel to 2001's popular PS2 first-person shooter. It's got all the stuff that made the previous game a hit: lots of powerful weapons, lots of enemy fodder, a number of vehicles you can ride in, and split-screen multiplayer features. Unfortunately, it's not difficult to tell that Red Faction II was originally designed for the relatively less powerful PlayStation 2, as this port feels somewhat watered down, with its fairly plain graphics, small levels, and noticeably long loading times. The game's single-player campaign is also pretty short, and the multiplayer portion has limitations of its own, but Red Faction II can still offer some good shooting action for fans of the genre.

Red Faction II takes place in the same universe as the first game: the 22nd century, where humankind is ruled by an evil dictatorship, and only the freedom fighters who call themselves the Red Faction are able to stand in its way. Parker, the hero of the first game, is nowhere to be found here, so no previous Red Faction experience is required or even expected. Instead, this sequel introduces a nanotech-enhanced soldier called Alias, whom you'll play as during the course of the single-player campaign. Alias is part of an elite squad developed to suppress insurgents like the Red Faction, but the squad has turned its coats and now seeks to rid the world of Chancellor Sopot, the man at the root of the Commonwealth's strife and poverty. The plot is pretty thin, and the twist that's thrown in about halfway through seems ridiculous, but at least the story doesn't get in the way of the action. In your mission to assassinate Sopot, and then quell an even greater threat, you'll travel by air, sea, and land while taking on droves of enemies and numerous challenging situations in a diverse and tightly paced series of levels.

Most single-player first-person shooters aren't very long, and Red Faction II is no exception. Even though you'll run into several very tough boss battles when playing through the game at the normal difficulty setting, expect to get through the campaign in approximately seven hours. As if to make up for the relatively short length of the campaign, the designers apparently tried to make sure that there's never a dull moment in it. The very first mission has Alias blowing an enemy base to bits using a weapon that fires both rockets and grenades, and things never really let up from there. The flow of the action does slow down on a couple of occasions, such as when you'll be forced to outwit enemy snipers using your own high-powered long-range rifle, but even those sequences are pretty intense. If you've played other sci-fi-themed shooters, you won't find much in Red Faction II that's completely different from what you've seen before, but the game usually hits all the right notes, doesn't get boring, and packs in lots of variety.

Much like in the first game, the variety in Red Faction II comes largely from having an occasional in-vehicle sequence to break up all the action on foot. Each of the four vehicles in Red Faction II is remarkably powerful, and they all make for some entertaining shooting sequences. The vehicles aren't simulated with the same level of realism as the vehicles in Halo, but they make up for it to some extent with their toughness and raw firepower. When you're flying high through the air between skyscrapers in the gunship or crashing through war-torn city streets in the tank, the game effectively becomes a rail shooter--you're just the gunner, and your job is to blow up any enemies that get in your way as Shrike, your squad's vehicles expert, steers you through some seriously hostile territory. But when you're in the submarine or the battle armor, you actually get to navigate as well as shoot. All the vehicle sequences are fun while they last, even though they're relatively easy and simple compared with the standard action. You'll especially like the battle armor, which is basically an assault mech bristling with Gatling guns and missiles. You'll take on entire armies in this thing.

Then again, you'll take on entire armies on foot, too. Though you'll sometimes fight alongside one or two of your squadmates, you'll usually go at it alone, and a slew of high-powered, over-the-top weapons are available for quickly eliminating enemies individually or in groups. The best of the original Red Faction weapons have returned and are joined by a number of new ones, making for well over a dozen different weapons in all, ranging from deadly small arms to devastating artillery. Speaking of which, as in the first game, in Red Faction II you can use explosive weapons to literally blast through walls. Certain walls, that is. The developers made a really big deal of this with the original game, even though the ability didn't come into play very often. It's put to better use in the sequel, where at times you'll end up making yourself an entryway if you can't find one that suits you. The fact that your character is a demolitions expert certainly justifies all this.

Explosive or not, just about every weapon of yours has an alternate firing mode or some other special ability. For instance, the rail driver allows you to target and shoot enemies who are on the other side of walls or obstacles. The precision rifle points you to enemies in the vicinity when you're looking through its scope. All this hardware packs a satisfying punch and looks good in action, though the weapon that will likely get the most use is the NICW, an assault rifle with a rocket-propelled grenade launcher and a built-in targeting system, evidently modeled after the US military's next-generation objective individual combat weapon. An all-purpose firearm, the NICW can get you through virtually any encounter. You'll appreciate that this and most other weapons in your arsenal are so effective, though you might find it odd that you can carry all the game's weapons simultaneously.

Red Faction II controls like most any other console first-person shooter these days, with the left analog stick controlling movement, the right stick controlling your aim, and the shoulder buttons controlling your weapons' primary and secondary firing modes. In a great touch, these buttons are also used to independently fire smaller weapons (such as pistols or submachine guns) that can be wielded in pairs. The controls are about as responsive as can be expected in a console shooter, and the somewhat imprecise aiming is mitigated by an auto-aim feature. Notably, the Xbox and GameCube versions of Red Faction II lose the PS2 version's support for PC shooter-style USB mouse-and-keyboard controls.

Too bad the game doesn't support online play. Red Faction II does offer a fully featured multiplayer mode, accommodating up to four players in a split-screen view, though unfortunately there's no option to play the campaign cooperatively. At any rate, Red Faction II's multiplayer mode still adds to the value of the game, especially since it features computer-controlled bots that you can play against either alone or with others.

Eight different multiplayer game types are available, ranging from standards like deathmatch, team deathmatch, and capture the flag to variants like regime, in which one player is the "dictator" and must try to survive as long as possible as all the other players try to bring him or her down. These are all pretty standard multiplayer shooter variants, involving either all-out shooting mayhem or goal-oriented, team-based objectives. The team-based modes can be fun if all human players join the same team and pit themselves against the AI, and if you find that some of the game's extremely powerful weapons unbalance the multiplayer game, you can remove them from play. Numerous other options, decent bot AI, and a variety of serviceable maps make multiplayer Red Faction II a well-rounded experience overall.

It may be fun to play, but Red Faction II loses some points because it doesn't look all that great. In fact, it looks like a straight port of a PS2 game, which is more or less true. Textures are blurry and plain, and in the instances where the visuals were sharpened up, you'll likely just notice other problems such as the low polygon counts on enemy characters. The GameCube version hardly looks any better than the PS2 original, though the Xbox version looks better and tends to run smoother--yet both these new versions still suffer from some of the frame rate issues that affected the PS2 game. You'll see things slow down noticeably when the action heats up. The cutscenes still aren't particularly good looking, though the one played when Alias finally catches up to Sopot is memorable. The original game's settings mostly consisted of bland tunnels and sterile laboratories, while the sequel's rundown urban environments and sophisticated military installations tend to be a little more colorful. Enemy characters are brought to life using motion-captured animations, and not only do these animations look good, but you also won't notice much repetition in them as you keep shooting down bad guys. The weapon models are diverse and look appropriately hefty and high tech. The game also sports some pretty nice explosions--as well it should, for a game starring a demolitions expert. Plus, the vehicles are portrayed convincingly.

Red Faction II's audio holds up better than the graphics in translation. Though the cries of enemy soldiers repeat a bit too often, and some of their lines are pointlessly profane, the sounds of all your various weapons and explosions are loud, clear, and effective. A high-tempo electronic music score pumps in the background beneath the near-constant roar of your firearms and helps maintain the game's high intensity level. The quality of the voice acting is mostly good, with the highlight being Molov, the squad leader of Alias' unit, who is voiced by Lance Henriksen (Aliens).

Red Faction II is a good shooter overall, offering up a short but sweet single-player campaign and a solid multiplayer mode for the long run. It's not long on looks, but it's got no shortage of action. 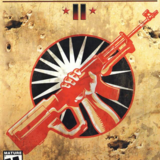 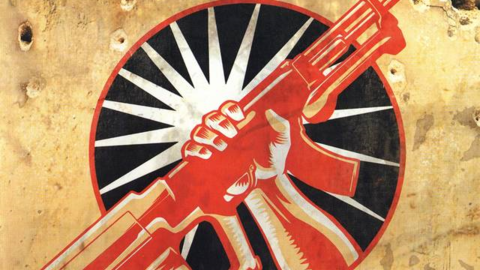 The game's single-player campaign is pretty short, but Red Faction II can still offer some good shooting action for fans of the genre.