The crazy sense of humor remains intact, but hackneyed and rudimentary motion controls have lost almost all of their luster.

In two short years, the Wii minigame genre has gone from relatively novel concept to full-blown phenomenon. The original Rayman Raving Rabbids was released at the forefront of this trend, successfully stringing together a collection of absurd challenges that relied on simple motion controls and an offbeat sense of humor to create a fresh and oddly compelling overall package. Now Ubisoft has released the series' third game, Rayman Raving Rabbids TV Party, at a time when the genre has grown bloated and stagnant. Although TV Party manages to expand on the series' trademark wacky sense of humor with a newfound focus on television pop culture, the gameplay has remained mired in the realm of diminishing returns by failing to improve in any notable way. TV Party simply relies too heavily on its sense of humor to mask the fact that the extremely basic motion controls that make up the bulk of the gameplay have collected a thick layer of dust.

In TV Party, the titular raving rabbids are just as insane as ever, but this time around they've extended their reign of terror to the television airwaves. In their effort to continually haunt poor platforming mascot Rayman, the rabbids have hijacked a TV station and are now broadcasting their own twisted programming directly to Rayman's home. It's a thin plot told via a small handful of prerendered cutscenes, but what it does is lay the premise for an entertaining overall presentation. There's a mock cable-broadcast look and feel to the whole thing that has the rabbids imitating everything from zombie B movies to high-fashion runway shows. These oddball scenarios combine with flashy onscreen graphics and incoherent rabbid screaming to create a rather funny send-up of the squawking chorus of voices that makes up most of cable TV.

The TV format also affects the way the game's solo campaign is organized. Each minigame is essentially a stand-alone show, and you're the master in charge of deciding which programming makes the airwaves. What that entails is completing a minigame of your choosing to fill a timeslot, which unlocks the next batch of shows to play during the next hour. Shows are organized by channel, with stations such as extreme sports, music, movies, and reality television all combining for more than 50 minigames. One great thing about this system is that it gives you a lot of freedom to choose which games you want to play to advance and unlock more programming variety.

Unfortunately, freedom of choice and genuinely amusing slapstick humor can take these minigames only so far. The vast majority rely on bare-bones, occasionally unresponsive motion controls that don't feel like they've evolved in the least bit since the original game. There are light-gun sequences in which you merely point and shoot for several minutes, racing games in which you do little more than tilt the remote left and right and flick it for speed boosts, and rhythm games that have you shaking the remote and Nunchuk to match scrolling icons. Even the dreaded act of shaking both controllers as frantically as possible appears in the form of a horse-jockey game. A lot of these games at least come with amusing scenarios such as exercising with a bearded rabbid made to look like Chuck Norris, or riding a wildebeest like a snowboard, but that novelty wears off after one or two play-throughs, leaving you with a control scheme that feels hackneyed and thoroughly unrewarding.

Some games, though, either look beyond motion controls, or employ the use of the balance board to make them more exciting. In the former camp is a fashion-designer game in which you dress up your rabbid in articles of clothing according to hilariously arbitrary criteria such as "cool and hairy, but not funny," and then submit your design to judges. In the latter category are the dancing games that have you matching hand gestures and foot taps to licensed songs such as "ABC" and "Jungle Boogie." The balance board is less interesting in the racing games, during which you're steering with your feet (or even butt, in many cases), but for the most part it's a welcome addition that adds at least a little bit more excitement to simple minigames.

TV Party's multiplayer bears a very strong resemblance to the solo campaign, but a bit more streamlining would have made it feel like more of a party. Up to eight players (taking turns in two groups on four remotes and Nunchuks) can take part in the same games offered to solo players. Some games give the chance to play four at a time, but a disappointingly large number restrict access to a single player at once. You can decide from the outset on the scoring system and the number of days' worth of programming to play through, and the winner of each game then decides which show the players will take part in next. Unfortunately, it's a system that presents way too much downtime between games in the form of loading, menu-navigating, and other time sinks to really let the frantic nature of the gameplay shine through.

Visually, TV Party is an example of how character and outright absurdity can make up for what are only so-so graphics. There's generally enough insanity onscreen to make you look beyond the bland models and textures, while the similarly avant-garde animated cutscenes that play out before and after each game certainly don't hurt. Sound is also a plus, as the rabbid screaming goes well alongside the TV jingles to make for a fun and borderline insane experience.

Altogether, Rayman Raving Rabbids TV Party isn't without its charms. It's an often laugh-out-loud game that's overflowing with a quirky sense of humor. It's just unfortunate that the controls haven't aged as well as the gags in this third installment of the Raving Rabbids series in as many years. Quite simply, the rudimentary and tired motion controls have lost almost all of their luster, and consequently most challenges feel like an all-too-familiar chore rather than an exercise in chaotic excitement. 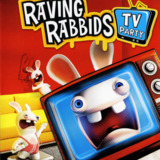 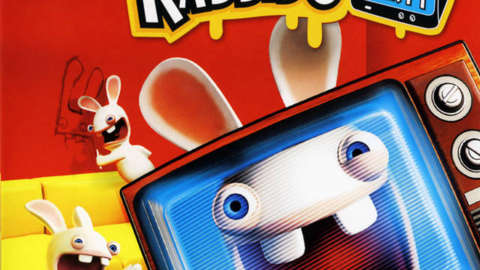 The rabbids are back in Rayman Raving Rabbids TV Party, in which gamers get to use the Wii Balance Board to play through minigames that spoof TV shows, adverts, and pop-culture memes.