Ratchet & Clank: Going Commando is a great game that will please both fans of the series and newcomers alike.

The first Ratchet & Clank was released almost exactly one year ago. The game stood out because it rewrote a lot of the rules that typically governed--and held back--the platform genre. It stepped away from the large amounts of item collection and backtracking that had become standards for the genre since it was taken into 3D. It also gave you a large catalog of weapons to choose from and a generally longer adventure than you'd expect from the genre. Now Sony and developer Insomniac have released a follow-up that once again capitalizes on these same strengths while adding a host of new features that make Ratchet & Clank: Going Commando just as great as its predecessor, but inherently less surprising.

This time out, Ratchet and Clank are friends from the get-go. The game picks up not long after the conclusion of the first game, and so the two are heroes in their home galaxy. When the call to action comes in, it's from an entirely different galaxy. An experimental creature has been stolen from MegaCorp, and the company's president, a bumbling old man named Fizzwidget, hires our heroes to retrieve the creature. Over the course of the game, it becomes apparent that these cute little experiments have a slightly more evil side to them, and the story spins out from there with the typical "world in peril" ramifications you'd expect from most action games. Overall, the story is well told, and it maintains the same sense of humor found in the first game.

The gameplay in Going Commando really hasn't changed much over the past year. You'll still make your way from planet to planet, completing objectives and viewing more of the story, which is conveyed via well-animated cutscenes. The game still does a great job of avoiding typical platformer gameplay by focusing on the proper use of your weapons and gadgets against a variety of enemies and obstacles instead of just testing your ability to jump from one ledge to the next. You'll be able to get ahold of a few of your older weapons and gadgets, but this is a new galaxy, serviced by a different weapon manufacturer, so you'll be finding and purchasing new weapons. Ratchet still packs his giant wrench, which can be used to hit enemies up close or thrown from a distance. You are also able to acquire weapons, like a blaster, an energy shotgun, a sniper rifle, various sorts of explosive devices, a rocket launcher, homing missiles, and many more.

The first game didn't really give you too much reason to use your weapons. If you were skilled with the wrench, you could get by without expending too much weapon ammo. Aside from this game's enemies being tougher, Ratchet & Clank: Going Commando gives you plenty of reasons to fire away. The main addition is that most of your weapons gain experience as you use them, and once you cross a certain usage threshold, you'll receive the upgraded "gold" version of that weapon. This turns your gravity bombs into mushroom cloud-laying mini-nukes, it lets you fire off three seeker rockets instead of one, and it gives you various other similar increases. Ratchet also gains experience, so, as you eliminate enemies, you'll level up and add additional segments to your life meter. You'll also find damage-reducing armor and stronger wrenches as you make your way through the game. On top of that, you'll find hidden platinum bolts throughout the game. These bolts can be taken to specific shops and traded for even more weapon upgrades, letting you add shock, acid, or lock-on effects to some of your firearms. These upgrades are cool additions, though they don't make dramatic changes to the game.

While the majority of your quest is spent in the standard on-foot setting, you'll also encounter a few vehicle-driven sections that act as minigames. Additionally, the game features some hoverbike racing, some desert mining, and some space combat. Adding to the upgrade-driven enhancements, you'll eventually find a shop that sells ship upgrades, giving you stronger shields and more weapons to use in the space combat sequences. While a few of these sequences are required--they give you weapons or other necessary items as prizes--there are also additional challenges in each area that award varying amounts of money as prizes.

Going Commando is longer than your average platform game, clocking in somewhere between the 15- and 20-hour mark, and the varied look of the different levels breaks up the action pretty nicely. You'll run into a few boss battles over the course of the game, and they're somewhat exciting, though most of them aren't terribly difficult either. The game's difficulty also increases steadily as you move through it. At the beginning, Ratchet is relatively weak, and so are the monsters you're facing. As you gain experience and fill out your life meter, you'll also be visiting the homes of more difficult monsters. The difficulty doesn't just come from more damaging attacks, either. You'll encounter more fearsome creatures as you move on, and you'll have to constantly vary your tactics to take on your enemies. This puts a nice spotlight on the different weapons, as there are a lot of different strategies you can employ with the game's varied arsenal.

Ratchet & Clank: Going Commando uses a lightly updated version of the engine used for the first game, and, as a result, it looks roughly identical to the original. Of course, the first game looked really fantastic, and it's only a year old, so this isn't exactly a bad thing. Some changes and enhancements have been made, and this is most clearly manifested in the game's cool, new weapon effects. The game's explosions, implosions, and fire effects are all great. The entire game still looks pretty good, usually maintaining a smooth frame rate while offering up large, colorful environments. However, given advancements in PlayStation 2 graphics over the last 12 months, the game doesn't look quite as impressive. Also, the game's reliance on a lot of recycled elements from the first game, such as the menus and mission screens, seems a little lazy.

In tems of the game's audio, Going Commando follows in the footsteps of its predecessor. Stylistically, the game's music is very similar, providing the same sort of upbeat, frantic music as the first game. The sound is also largely unchanged, which, as with the graphics, isn't necessarily a bad thing because the game sounds pretty great. The weapon effects are the stars of the show here. Additionally, the game contains a good deal of voice, and the voices fit the characters very well. The game has a good script as well, which gives the voice-overs meaning.

All in all, Going Commando is as great a game as Ratchet & Clank was, but, considering that Going Commando is largely the same as the original, at times it feels like more of a mission pack than an entirely new game. The new weapon upgrades and other additions are nice touches, but they don't exactly reinvent the game. Still, the main point is that Ratchet & Clank: Going Commando is a great game that will please both fans of the series and newcomers alike, so it's definitely worth your while.

View Comments (2)
Back To Top
8.8
Great
About GameSpot Reviews 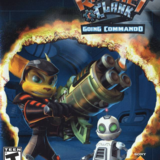