Ratchet & Clank Future: Tools of Destruction is a fun, combat-oriented platformer, though it's extremely easy and suffers from a bit of an identity crisis.

Over the course of five games the Ratchet & Clank franchise has crafted its own identity and a large following as well. It's odd, then, that the duo's first outing on the PlayStation 3 finds them facing an identity crisis of sorts. The game just can't decide what it wants to be. The story tries to be epic in its scope and appeal to an older audience, but the game is extremely easy and the story's premise is thin and the ending disappointing. The core gameplay of shooting and platforming is as solid as ever, but it's diluted by too many uninteresting minigames and unnecessary gameplay mechanics. Although these issues prevent the game from achieving the same high level as previous entries in the series, it's still a very good game.

A good story would have been nice, but this sort of game is really all about gameplay, so it doesn't hurt too much that one of Tools of Destruction's weakest aspects is its story. You play as Ratchet, the last of the lombax, which are a race of catlike creatures. Apparently one living lombax is one too many for the game's villain, a feisty, diminutive, big-headed alien named Emperor Percival Tachyon. He has a bit of a Napoleonic complex, and his goal is to finish off the lombax once and for all, so of course you've got to deal with that. But that's not your only goal. Ratchet knows very little about his race, but he learns that the lombax have some sort of secret, so he makes it his mission to discover it. Clank, Ratchet's robot sidekick, has his own issues to deal with. He's been interacting with some cute little aliens called zoni that only he can see. Naturally, everyone thinks he's nuts every time he brings them up. The game's script is well written and the dialogue is quite funny, but the story is barely fleshed out enough to give you reason to go from one level to the next. It's not helped by a cliffhanger ending that does everything but plaster "Find out the exciting conclusion in the sequel!" across the screen.

Thankfully there's some really good gameplay along the way. Like in the previous games, the action is viewed from a third-person perspective and is primarily a mix of platforming and shooting, with an emphasis on the shooting. One of the game's best aspects is the controls, which are simple and very responsive. You'll be jumping around and blowing bad guys away in a matter of seconds. As always, Ratchet has a large arsenal available to him, but he starts off with only a blaster, grenades, and his trusty wrench, the latter of which he uses to pummel foes. He'll have to purchase the good weapons and armor with the game's currency: bolts. These can be collected from fallen enemies or found by smashing crates. The weapons Ratchet can use are extremely varied: There are grenades, rockets, spikes, blasters, a whip, bouncing saw blades, and a whole lot more. The game does a nice job of encouraging you to use different armaments. Not only are certain weapons more useful against specific creatures, but as you use a weapon, its level will increase and it will get more powerful. You can also improve weapons' range, ammo-carrying capacity, rate of fire, and more by collecting crystals that some enemies drop.

Ratchet also has a lot of gadgets at his disposal. These can be purchased from a vendor or found throughout the game in crates. He can release a swarm of nano bees that will attack anything that gets near; toss up a disco ball and blast his enemies as they dance; use a leech to steal their health; turn foes into penguins; and even break out a holographic pirate outfit for those occasions when he needs to be all piratelike. Switching from one weapon or item to another is done by pressing the triangle button and then selecting a different item from one of three screens. It's possible to fill all three screens, and the game lets you switch out items, but the mechanic for doing so is poorly implemented. Although the game does a good job of encouraging you to use different weapons, devices, and gadgets (there are over 30 total), you'll find that there are a handful that work extremely well (and some that are useless), so it's possible to get into a rut of using the same attack patterns over and over because they're so effective. This makes an already easy game even easier.

There's a lot more to Tools of Destruction than platform jumping and shooting--perhaps too much. There are so many different gameplay mechanics that you get the sense that the developer didn't say "no" to any idea that was presented during the design process. Some of these mechanics add to the experience, but others feel as if they're here just because they could be. On a few occasions, Ratchet will roll around in a gyroball similar to the Super Monkey Ball series. To open certain doors, he'll have to dress as a pirate and do a brief dancing minigame. There are two or three times when you'll have to jump into the water and swim through mine-laden tunnels to get somewhere. Sometimes Ratchet will hop on rails and grind his way across a level while jumping gaps, and dodging trains and missiles as he goes. Every now and then, when you're flying to another planet, you'll actually have to fly your spaceship and shoot down enemies in brief, not-all-that-fun on-rails Star Fox-like sequences.

All of this, and we haven't even gotten to the Sixaxis stuff yet. Early on in the game, Clank learns he can sprout wings, so there are a few times when you'll fly around levels while tilting the controller to steer. It's kind of fun, but ultimately pointless. Ratchet can also cut through some surfaces with a laser that you control by twisting the controller, and he can even hack security systems with motion controls by rolling a ball around and conducting electricity. Lest we forget, there are a few times when Clank goes solo. These situations are more puzzle- and platforming-oriented than Ratchet's, and you'll have to use the zoni aliens to help repair items and manipulate bridges. They say variety is the spice of life, but there's such a thing as too much spice.

Although these ancillary modes break up the flow of the game, the core gameplay is so solid that you'll still have lots of fun on this 10-12 hour adventure. Combat is quite satisfying, and though you have to be a bit conservative with your ammo, should you run out it's never too long until you can restock. This lets you focus on happily decimating robots and aliens. Each of the game's levels takes place on its own planet, with its own theme and style. There's a volcanic planet; a jungle level; a floating city; a level amongst some asteroids that has a cool teleporting mechanic; Ratchet's rocky, cliff-filled planet; and a few more adventure game clichés. There's generally one linear path to a level's main objective, but there's plenty of opportunity for exploring if you're trying to find the game's many collectable items. This isn't a collect-a-thon--many of the items are optional--but you'll still spend a fair amount of time smashing boxes and collecting bolts. If at first you eschew the collectable items but then decide you want to seek them out, you can revisit planets at any time. However, the collecting doesn't slow the game down much, and thanks to clearly laid-out paths and a helpful map, you're rarely at a loss as to what to do next.

You won't have to worry much about dying slowing you down, either, even though when you do die you often have to do large portions of the level over. The game is extremely easy and gets remotely difficult only in the last hour or so. The difficulty will be fine for kids, but anyone who has played a Ratchet game before will likely find this adventure to be too easy. There's no option to change the difficulty setting, but you do unlock a harder mode once you finish the game.

One thing the developer did nail was the game's graphics. Tools of Destruction is probably one of the most vibrant and colorful games you've ever seen. Part of this is due to the lighting, which makes everything look more dynamic, but the game uses lots of pastel colors and what appear to be hand-drawn backgrounds to make everything look like a cross between a cartoon and a Pixar movie. Each level has a unique (though not particularly original) visual style, so you really feel as if you're visiting different planets when you move from one level to the next, not just different areas of the same place. Weapons are made all that more enjoyable thanks to some outstanding particle effects and explosions that don't tax the game's speedy, smooth frame rate in the slightest. With all of the camera pans, explosions, and dozens of characters onscreen at once, it's almost as if the developer was taunting the frame rate, daring it to slow down. Other than in a few brief instances, it never does.

Ratchet & Clank's audio is solid but mostly unremarkable. The voice acting is quite good, and there are some funny lines to be sure, but even that can't salvage the uninteresting story. Save for the great pirate theme, the music generally stays in the background and is pretty average. Sound effects are suitably bombastic and help bring the combat to life.

Try as it might, Tools of Destruction doesn't achieve the same level of greatness as its predecessors. It's too easy, the story falls flat, and the "throw everything in including the kitchen sink" style of gameplay takes too much of the focus off the tight platforming and fun combat. That said, the gorgeous visuals and generally fun gameplay are enough to make Tools of Destruction worthwhile for the series' fans and newcomers alike.

View Comments (8)
Back To Top
7.5
Good
About GameSpot Reviews 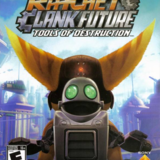