Ratchet & Clank: Full Frontal Assault's one and only competitive multiplayer mode is an enjoyable blend of action and tactics.

Following in the footsteps of last year's All 4 One, Ratchet and Clank continue their foray into multiplayer-focused action with Full Frontal Assault. There isn't a whole lot to this game; it's narrow in scope and priced accordingly. Here, the focus is on competitive multiplayer, and the one and only such mode requires you to balance making tactical decisions with blasting lots of things to smithereens. These two elements form a fast-paced whole that rewards your reflexes and your smarts.

Playing Full Frontal Assault's competitive multiplayer either one-on-one or two-on-two, your goal is to destroy the six generators in your opponent's base while ensuring that at least one of your own generators survives. Play revolves through three phases--a node-capturing phase, a defense- and squad-purchasing phase, and an assault phase.

During the first phase, called recon, you zip across the map, enjoyably aided by rocket boosters on the soles of your boots. Nodes around the battlefield are guarded by meager defenses; by defeating those forces, you can claim the nodes as your own. Of course, during this time, your opponent is also racing to claim nodes, and may even try to take nodes that belong to you. Capturing nodes rewards you with weapons for your hero, and more importantly, each node you currently control pays out a steady stream of bolts over time.

Those bolts start coming in handy once the squad phase begins. During this phase, you can spend the bolts you've got coming in on base defenses--turrets, barriers, mines, and so on--and on forces that assault the enemy base. Do you pour all your bolts into trying to build a nigh-impregnable fortress? Do you go on the offensive, trying to overwhelm your opponent in the early stages? Or do you hedge your bets? During the first few rounds, your supply of bolts isn't great, but nodes gradually dish out more bolts as games progress, ensuring that battles escalate over time.

If your opponent secured more nodes than you during the previous recon phase, it's not easy to come back from a big bolt deficit, but it's not impossible, either. There's no rule that says you have to spend your entire squad phase in your base. You can't capture nodes during this time, but you can whittle away at the defenses on your opponent's nodes, making them quick and easy to take when the next recon phase begins and setting the stage for a possible comeback. While some battles are one-sided affairs that end in a quick and decisive victory, others have an exciting ebb and flow as players vie for dominance. There are enough tactical options available to you and your opponent to allow for a good deal of unpredictability and some sudden and surprising shifts in momentum.

The squad phase gives way to the assault phase, during which any squads you purchased assault the enemy base, and your base comes under attack from enemy forces. As before, you have a choice to make, and it can make a huge difference. Do you stick around and protect your generators, or put your considerable muscle into the assault on the enemy base? If your opponent's base is poorly guarded, your presence there can be the deciding factor in the battle. But if your defenses are inadequate to meet the enemy onslaught, your absence at home may be the final nail in your own coffin.

Solid shooting action supports the tactical decision-making. You start out with a straightforward combuster, but as you take nodes, you acquire an assortment of alternate weapons, as well as support items like the death-dealing robot sidekick Mr. Zurkon and the attack decoy known as Dopplebanger. Ammo is somewhat scarce on the battlefield, so the more weapons you're packing, the longer you can hold out in a fight. Smart use of your support items can help you take nodes and fend off enemy attacks, and in true Ratchet & Clank tradition, weapons feel powerful and are fun to use. Unfortunately the AI of enemies you must sometimes use your weapons on isn't very sharp. You commonly find foes getting caught on the environment as they approach your base.

Ranked competitive matches rate your performance and then place you into one of several leagues. The system does a fine job of finding opponents at around your skill level, while also giving you the goal of getting better and climbing up the ranks. You can also host or join custom matches and play with friends.

In addition to the competitive multiplayer, there's a brief, rudimentary campaign that can be played either solo or in split-screen or online co-op. Most missions have you defending a base while venturing out onto the battlefield to take out enemy strongholds, and it all culminates in a decent boss battle. There are a few laughs to be had--seeing Captain Qwark flex heroically and pointlessly as he flies through the air is always amusing. But if you come to Full Frontal Assault hoping for a substantial single-player experience like those offered by so many Ratchet & Clank games, you'll be disappointed.

This $20 game does one thing well: it has a competitive multiplayer mode that blends tactics and action in a way that allows for some exciting and unpredictable battles. You also get the Vita version with your purchase, though that won't be available until January. It's unfortunate that there aren't more multiplayer modes; as good as the one here is, you eventually wish for a change of pace from the cycle of recon, squad, and assault. But having your forces lay waste to your opponent's base as you keep his forces at bay with the dance-inducing power of a Groovitron is still a satisfying way to win a fight.

View Comments (47)
Back To Top
7
Good
About GameSpot Reviews 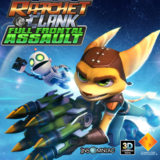