Ratchet & Clank: All 4 One Review

Change is not always for the better, but Ratchet & Clank: All 4 One provides enough delightful moments to offset its shortcomings.

It's all a matter of perspective. When you compare All 4 One to previous Ratchet & Clank games, you might think the biggest change is the addition of a cooperative mode. But given that you could team up in Ratchet: Deadlocked, that isn't quite true. Rather, a zoomed-out, fixed-angle camera is the biggest differentiator. You no longer view battles up close and personal with direct control over where your bullets fly. And this shift in how you look at and interact with the world makes the shooting portion of this space-faring adventure its weakest aspect. Thankfully, thoughtful puzzles and exciting vehicle sequences partially fill the void left by the so-so combat, and the inherent delight of joining forces with your friends ensures you're continually having fun. This may not be the Ratchet you've grown accustomed to, but whimsical charm and wacky hijinks make this another solid entry in the long-running franchise.

The idea of Dr. Nefarious joining forces with the formidable duo who has repeatedly foiled his evil plans may sound like the most preposterous aspect of this oddball plot, but there's one device that's even harder to swallow. The fourth member of your crew--the bumbling, selfish, and cowardly Captain Quark--has been elected president for reasons that cannot be fully comprehended. This leads to more than a few jokes in which he proposes political rewards for saving his skin, and it's difficult to contain laughter when Quark is straining his arm to pat himself emphatically on the back. This comedic tale is full of lighthearted moments that fit the tone set by previous games in the series, and the friction between these former-enemies-turned-allies ensures that these delights continue for the entire adventure. The only downside to the constant yammering is that many lines are repeated so often that they grow tiresome, but this is a small price to pay for the amusing situations that unfold.

All 4 One can be played with up to three other players, either offline or online, and you can drop in or out at any time. It's seamless and runs smoothly, no matter how chaotic things get onscreen, and teaming up with a few pals is certainly preferable to venturing forth alone. The downside to playing with friends is that the camera is often so restricted that boundaries and enemies are cut off, resulting in deaths that are not your fault. If you play by yourself, an AI companion tags along to help you in combat and solve puzzles, and though it's usually smart enough to help rather than hinder your progress, there are times when it simply stops moving or walks straight off of ledges. However, the biggest downgrade with this shift toward being multiplayer-focused is that the exquisite visuals from Ratchet & Clank Future: A Crack in Time have been drastically toned down. Dull colors, blurry textures, and poorly defined character models follow you every step of the way. Strong artistic design provides pleasing sights throughout, but the technology chugging behind the scenes can't keep pace with the high standards set by its predecessors.

As in previous games in the series, shooting is still the main method in which you interact with the environments and dispose of your enemies. However, unlike in previous games, the option to play it as a traditional third-person shooter is gone. The right stick is relegated to weapon selection, and an aerial viewpoint makes you feel disconnected from the action. Instead of having fine control over where you're aiming, you have to contend with a lock-on system that doesn't always choose the best possible targets. Finicky aiming is compounded by a team-up system that rewards you for shooting the same target as your friends. When you're all firing in unison at a nasty meanie, you deal damage quicker, fire faster, and cause an explosion when a special meter fills. If you're firing alone because your teammates are distracted or aiming at the wrong foe, you feel weak in comparison.

Problems continue with the upgrade system. Previously, the more you fired a gun, the more powerful it became, which forced you to use every gun in your arsenal to discover its hidden secrets. Now, you use bolts at special kiosks to beef up the power, add more ammunition, and transform its functionality in some way. There is still an inherent joy in turning your single-shot combuster into a tri-laser killing machine, but the empowering way this was handled in previous games is seriously missed in this iteration. Although upgrading isn't nearly as eventful this time around, your impressive repertoire still has a creative edge. Returning favorites, such as Mr. Zurkon, should please anyone who yearns for a sarcastic, kill-craving robot to travel along with, and the requisite creature-morphing device ensures the world's pig population steadily rises. The most exciting of the new gadgets is the blitzer, which turns your body into a deadly projectile, though it could mean your own death if you're not careful. Because of the aforementioned aiming and camera issues, shooting isn't as much fun as in years past, though that is no fault of the fancy tools of destruction you have at your disposal.

Aside from gunning down throngs of unrelenting enemies, there are platforming and vehicle portions to give you some variety. All 4 One excels in these areas because the camera moves in closer to create a serious sense of speed, and a constant flood of obstacles keeps you invested in dodging quickly and keeping your eyes peeled for the next potential danger. The best of these sequences occurs when you don a handy jetpack to fly through a dangerous vertical shaft. Spinning buzz-saw blades threaten to give you a too-close-for-comfort shave if you veer too close, and pesky enemies fire at your flailing figure until you vanquish them with a few sure shoulder chargers. There are times when you slide down an icy hill, cruise behind a chugging boat, and zip along Ratchet's trademark rails. Every chance you get to breeze through these cartoony worlds is loads of fun and serves as a welcome respite from the sometimes tedious shooting sections.

Puzzles also make up a sizable portion of this adventure, and though they aren't particularly tricky, it's certainly fun to put your heads together to figure out exactly how to advance. In a series of puzzles that unlock the fabled RYNO suit, you have to manipulate tubes to guide a feeble creature to the end of a maze. These side quests force you to work quickly and efficiently, and getting all of your friends dedicated to rescuing a furry rascal makes it a triumph when the creature happily reaches the end. The final piece of the diversity pie is boss fights, though these aren't as consistently good as the other portions. Oftentimes, you have to use your wits and skills to survive, and toppling a giant foe by carefully planning an execution is satisfying. However, other times, bosses sport inflated life bars, and mindlessly plugging away becomes tiresome. Still, most of the different activities in All 4 One are well executed and eminently enjoyable.

Variety is the biggest strength in All 4 One. Previous games had a tendency to offer too many distractions from the innate joy of shooting robotic foes. But now that the shooting mechanics aren't as satisfying, diversity is welcome, and every situation you find yourself in provides its own pleasures. Still, this is not the Ratchet & Clank you've come to know. The expansive worlds from games past are now linear and restrictive, and shooting is a task you must complete rather than the main crux of your adventure. Four-player cooperative play doesn't quite cover all of the faults, but Ratchet & Clank: All 4 One is still another good entry in this charming franchise. 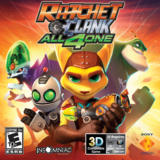