Adventure gamers looking for a cerebral jaunt through a futuristic underworld will find Project Eden a puzzle paradise.

Some might argue that Core Design gave birth to the third-person action genre--and rightly so. Core Design's Tomb Raider series captivated millions of fans with its crafty mix of action, exploration, and puzzle solving. But the classic third-person action series seems like a distant gaming memory, despite a blockbuster feature film and its cyber-babe heroine Lara Croft elevated to pop-culture icon status. While aspiring tomb raiders await Lara Croft modeled on next-generation hardware, Core Design has evolved the third-person genre with its new release, Project Eden. Though it shares its roots with the Tomb Raider series, Project Eden's superior blend of squad-based gameplay, ingenious puzzles, clever level design, and multiplayer modes creates an action-adventure game that challenges your brain more than your trigger finger.

Sometime in the near future, severe overpopulation facilitates the construction of bloated megacities that house the world's most affluent citizens. The remainder of the world's populace is relegated to the murky slums and crime-ridden underworld located below the towering skyscrapers. As a member of the Urban Protection Agency (UPA), you're placed in control of the four-member team in charge of policing the cities and investigating disturbances. Even though Project Eden's premise has been molded from any number of gloomy-future clichés, it creates an effective atmosphere for an intricate storyline revealed over 11 massive levels.

The controllable four-member squad and their varying attributes make up Project Eden's most important gameplay element. The team includes Carter, the squad leader, who conducts interviews with non-player characters and opens high-security doors; Andre, the team's engineer, who repairs broken equipment such as computer consoles and door mechanisms; Amber, the former human and current cyborg, who possesses the necessary armor to withstand hazardous environments and can wield the most powerful weaponry; and finally Minoko, the technician, who hacks into computer terminals to view security cameras, unlock doors, or control otherwise inaccessible machinery. You can switch between squad members at any time, and how you utilize each plays an integral role in both survival and success.

Project Eden unfolds as a series of puzzles throughout each level. Each puzzle requires the use of some or all of your four-member squad's abilities to complete and often features multiple solutions. Here is an example: You encounter a room that contains a broken computer terminal, but the room's currently filled with poisonous gas. First send in Amber, who is impervious to the gas, to locate the valve and switch off the poisonous vapor. Switch to Andre, enter the room, and repair the broken computer terminal. Finally, select Minoko, enter the room, and hack the repaired computer terminal.

Squad member abilities and high-tech tools such as small rovers, flying cameras, and sentry guns can all play a role in solving the multiple-step problems. Unraveling the puzzles requires keen observation and the patience to comb each new area for clues and hotspots. It's a refreshing change from the overdone "find the key, unlock the door, repeat" excuse for puzzles so prevalent in action shooters. Project Eden's puzzles are often complex and always logical, and they elicit a sense of satisfaction that gunning down countless enemies rarely produces.

That doesn't mean Project Eden forgoes combat completely, though it happens to be the weakest part of the game. Your squad employs six different energy-based weapons, each featuring two separate settings. The arsenal includes the standard-issue pulse gun, which features a rapid-fire mode or a more powerful charged shot; the extractor, which steals weapon energy from the enemy target that you can add to your own weapon energy or blast back at the target; and the time shock, which slows time around a single enemy or an entire group of foes. Combat is a clumsy affair primarily due to weak enemy artificial intelligence that does little to evade your attacks.

Project Eden's save game and player regeneration system encourages puzzle experimentation but renders the combat somewhat less than tense. Once reached, the regeneration points scattered throughout each level respawn slain and heal wounded squad members. Thus, it's possible to solve puzzles through trial and error and engage in battles without fear of permanently incapacitating a vital teammate--dead comrades just reappear at the last tagged regeneration point. Regeneration points aren't save points, though. In Project Eden, it's possible to save your game at any point, which further complements a puzzle system that often requires complicated, risky solutions.

The games' level design is superb. Scripted sequences and moody lighting add tension to the cautious exploration, and each new area offers an assortment of problems to solve. The graphics aren't groundbreaking, but they suit the urban setting and depict the mammoth skyscrapers and shadowy underworld to a satisfactory degree. You can play Project Eden from a third- or first-person perspective, but the consistent need to exhaustively search your surroundings renders the narrow first-person view nearly useless. The quality sound effects add to the atmosphere, and the voice acting provides adequate ambience without prompting you to turn the sound off.

Unlike Core Design's Tomb Raider series, Project Eden ships with several split-screen multiplayer modes, including deathmatch, teamplay, and cooperative play in the single-player game. Each supports up to four players when using a Multitap. Six deathmatch maps are included, and though they're a welcome addition, the action is standard fare with very few options and a notable lack of computer-controlled bots. You can set which weaponry and equipment will be available before the battle and use the regeneration and recharge stations scattered around the map to mend wounds or replenish weapon energy. A couple of capture-the-flag-style team maps are also included, as well as rover racing, which won't rival any dedicated racing game but still adds to Project Eden's value.

Cooperative play is Project Eden's most valuable multiplayer addition, and it will leave you wondering why more games haven't included the feature. It's possible to join any saved single-player game in cooperative mode or start the adventure from its opening moments. The joining player assumes the role of any unassigned character (and can switch freely between the others) and assists in all facets of gameplay. The split screen does make important messages tougher to read, but that doesn't keep the cooperative mode from being an enjoyable way to play through Project Eden or tackle its toughest areas.

Although Project Eden includes a first-person view, a variety of weapons, and a deathmatch multiplayer mode, don't expect to engage in the chaotic combat of a first-person shooter such as Red Faction. Instead, Core Design's Project Eden concentrates on level design and inventive puzzles to create the tension and action. The lengthy and addicting single-player game and the multiplayer component should keep aspiring urban protectors occupied for quite some time. Adventure gamers looking for a cerebral jaunt through a futuristic underworld will find Project Eden a puzzle paradise. 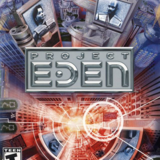