Professor Layton and the Curious Village mixes an interesting story, challenging logic puzzles, and exploration into an extremely entertaining package that you won't want to put down.

The game's story, which is told via a mix of beautiful full-motion video, as well as attractive still-scenes, follows that of Professor Layton, a man renowned for his puzzle-solving abilities. Along with his young assistant Luke, Professor Layton travels to the village of St. Mystere. Although they were initially called to the town to deal with a curiously written will and search for something known as "The Golden Apple," the duo will be faced with many other unknowns on the journey. Both the quality of the story, as well as its presentation, go a long way toward making this an adventure you'll want to see through to its satisfying conclusion--a rarity when compared to other puzzle games and minigames collections.

To solve the many mysteries in St. Mystere, you must travel around the village and speak to its inhabitants. In this aspect, Professor Layton plays similarly to a 2D point-and-click adventure. You move from one area to the next by tapping the screen. You can also tap random nooks and crannies to find hint coins, secret areas, or hidden puzzles. When you come across townspeople, you interact with them by tapping them as well. They're more than happy to help you...eventually. You see, each person has a logic puzzle that he or she needs you to solve before offering his or her assistance. Yes, this is a bit strange, but you'll learn the reason for it before all is said and done.

The story mode's 120 or so puzzles cover a wide variety of types; you'll need to move matchsticks, answer riddles, draw objects, solve math problems, place chess pieces, and much, much more. You might have to find out which suspects in a police lineup are lying, come up with a route to work for four people who don't like each other and don't want to see one other along the way, or even tackle a few puzzles where you must get a ball from one end to the other by sliding blocks around. The puzzles range from easy to difficult. While the game can get downright challenging, it rarely gets frustrating. There are no time limits, so you're free to mull things over, which often reveals an astonishingly simple solution. In fact, the way the game forces you to alternate between thinking outside the box and then hitting you with a simple puzzle that you overthink is one of the many clever ways in which the game will challenge you. But fear not, if you've pondered things from every angle and are still stuck, you can get up to three hints on each puzzle by spending hint coins that are sprinkled about the village.

Professor Layton is one of those addictive games that's incredibly hard to put down once you get into it. Thankfully, it's pretty lengthy. It should take you anywhere from 13 to 17 hours to finish the fantastic story mode, but once you're done, there's still more to do. You only need to solve about 80 or 85 puzzles to finish the game, so you'll probably want to locate and finish the remaining puzzles because they're so much fun. There are also a number of items to collect during your adventure: gizmos for a contraption, scraps of a painting, or furniture for Luke and Layton's hotel rooms. You're not likely to find all of these on your first play-through, but collecting all the items for each category unlocks bonus content, so it's likely that you'll want to go back to find them. Once you've done all that, there's a large amount of bonus content to keep you busy. For an additional challenge, you can tackle some ultradifficult puzzles not found in the story mode. But what will keep you coming back again and again are free weekly downloadable puzzles. That's right: free.

Impressive presentation is another aspect in which Professor Layton differentiates itself from other games in its genre. There's quite a bit of high-quality full-motion video, complete with voice acting--something not often seen on the DS. Environments and characters have a hand-drawn look to them and look like they came straight from an illustrated children's book. This unique style gives the game, as well as its characters, warmth and personality. The only blemish on the otherwise outstanding presentation is the audio, which consists of accordion music that is so repetitive and irritating you'll have to turn it down so you can concentrate on solving puzzles.

Professor Layton and the Curious Village combines exploration, story, and logic puzzles to make for a truly unique, entertaining, and even educational experience. Don't be fooled by the game's box art into thinking this is just some silly game for kids; it's a must-own game for any puzzle fan. 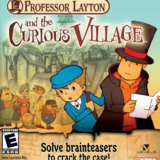 Professor Layton and the Curious Village
Follow
$9.99 on Walmart
Buy