This year's Pro Evo improves upon its predecessor in some key areas, but it does little else to keep up with the competition.

UK REVIEW--It's been a tough few years for the Pro Evolution Soccer series. After first showing signs of stagnation in 2008, it's subsequently been overtaken by FIFA in the area it once dominated: gameplay. While Pro Evolution Soccer 2010 doesn't stop the rot, it's a step in the right direction. The gameplay returns the series to its simulation roots and the online mode boasts much improved features and functionality. That said, major issues persist, including stilted animation, terrible commentary, and a lack of licenses that have long spoiled the series. Pro Evolution Soccer 2010 plays a good game of football that's substantially different to its rival FIFA, but in the face of such strong competition, it still falls short of expectations.

While the tweaks to this year's gameplay are minimal, the result is a better game overall. The speed has been reduced to make the game feel more like a simulation, and the goalkeepers have become much more efficient, which lowers the overall scorelines. These two changes address some of the major criticism from fans, but many of the old problems remain. Player animation looks incredibly stilted thanks to simple repeated running animations, while the transitions between moves are sharp and generally unpolished. The headline gameplay feature is 360-degree player control, which should make players more natural to control, but there's little noticeable difference in terms of the way these players move over last year.

What Pro Evo 2010 does offer is an incredible amount of player detail, with facial likenesses that are among the best in the sports genre. Famous players, such as Wayne Rooney and Steven Gerrard, look uncannily realistic, with incredibly lifelike faces, hair, and limbs. The likenesses can be hit or miss--Lionel Messi looks much better than Michael Owen, for example, and the likenesses are much more accurate in the upper leagues than in lesser known teams. There's a much better sense of physicality to the players than there was in last year's game, with head-on clashes resulting in the weaker player hitting the floor and some much more involved tussles for the ball.

Off the pitch, the game boasts two new features this year: team style and playing style cards. When you opt to adjust your team style you can customise settings in eight categories, such as attacking style, defensive line, and support range using a 100-point scale. Your changes are represented via an onscreen animation, so you can immediately see how the rest of your team will react to the player on the ball if, for example, you change the support range bar. However, these changes result in very little difference on the pitch, and unless you're the sort of player who likes to finely adjust all of your tactics, you can happily live with the default settings.

The playing card system suffers from a similar problem, with specific player skills having little noticeable impact on the game. You can toggle individual player skills, but the idea is redundant in most instances. Why would you want to turn off Steven Gerrard's ability to shoot from long range, for example? Some options make more sense--you can turn off Rooney's natural tendency to chase back to help in defense if you've set up a solid midfield. Again, these options are all tucked away in the menus with no tutorial offered on how to make them work. It certainly doesn't help that the written guide for these features is badly written (or perhaps poorly translated), with missing words and wonky grammar throughout.

The one major new game mode this year is Community. This mode allows you to start a Pro Evo party for up to 32 total players, and then play out cup and league competitions with friends. You can opt for either one-on-one play or have multiple players on each side, all while keeping track of individual performances. It's a good idea that's well implemented, and while it's easier to just play exhibition games, it's great if you frequently host Pro Evo events. The Champions League mode is even better presented this year, although it's ridiculous that some of the teams that play in the real competition still aren't featured in the game. The Master League mode has also received some improvements. Most notably, the Champions League has been included, which becomes a real highlight as you play out a career at your favourite club. This mode also boasts a much cleaner menu system than in previous years, with clearly defined screens to help take care of your major affairs. You also need to look after sponsorship contracts this year, with expectations around your performance. All of this is finally done using real currency rather than arbitrary points. The Master League may not have received a huge overhaul, but the accuracy of the transfer system, the simplicity of the presentation, and the long-term challenge it presents make it arguably the best single-player mode in any football game on the market.

The multiplayer mode was a mess in Pro Evo 2009, but thankfully, Pro Evo 2010 fixes all of the major problems. You no longer have to click through numerous pages and join a lobby just to play a quick match--you just go online and dive straight in. There are also more multiplayer features. You can start an online community, join a competition with other users, or take your Become a Legend player online. However, it was lag that really destroyed the experience last year, and this is an area that has been actively addressed this time around. A high proportion of matches are still laggy, but the game senses if it's going to be an issue early on and cancels the match with no penalty to either party. The result is a comprehensive and highly enjoyable multiplayer package that's much better than in previous games.

Presentation has improved dramatically, with smoother navigation, licensed music from such acts as the Stereophonics and Guillemots, and an aesthetically pleasing magazine-style menu system. Sadly, the same can't be said of the commentary. John Champion and Martin Lawrenson may have recorded new dialogue, but their delivery is unnatural and highly repetitive. This is particularly the case for Lawrenson, who--aside from sounding like his voice was recorded separately from Champion's--delivers inaccurate observations while sounding thoroughly bored.

Pro Evolution Soccer still plays a good game of football, and if you loved previous games in the series, you'll no doubt enjoy playing this year's model. However, Pro Evo can no longer claim to be the best football game in any given area, and other than the incremental improvements made over the past few years, it's in desperate need of a complete overhaul. Fixing problems, such as online play, is certainly welcome, but for a game that hasn't substantially changed across five years and two console generations, there's a definite sense of diminishing returns from this increasingly stale series. 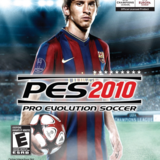 Pro Evo returns to its simulation-based roots for its 2010 incarnation.