There was certainly good stealth-action potential in the Predator license, but Concrete Jungle all but completely wastes it.

It's probably safe to say at this point that the Predator franchise has fallen on hard times since its glory days, when everyone's favorite man-hunting alien was going up against the likes of Arnold Schwarzenegger, Jesse "The Body" Ventura, and Danny Glover. And with a game like Predator: Concrete Jungle as the latest representation of what the Predator franchise is capable of, the downward spiral shows no signs of slowing. Imagine, if you will, a third-person stealth action game where the stealth only somewhat works, the combat is mindlessly simple, and the storyline makes Alien vs. Predator look like Dostoyevsky. Now, throw in some fairly ugly graphics, a lot of sloppy platforming, and an onslaught of moronic mission goals, and what you've got is a game you want just about nothing to do with.

In Concrete Jungle, you play a nameless hunter from the race of Predators we've all come to know and love over the years. You begin the game in the year 1930, during another very hot summer. You're on the hunt for an Irish gang member, which for some reason is never very well explained. After you relieve said gang member of his skull and spinal cord, you're on your way back to your ship when an explosion badly injures you. In grand Predator fashion, you unleash the self-destruct sequence, only to somehow magically survive the huge nuclear blast that manages to totally obliterate the rest of the city you were just running around in. After this incident, the leaders of the Predator race sentence you to exile on a remote planet for your dishonorable conduct on Earth (namely, the fact that you survived). Star wipe to 100 years later and your Predator brethren come back, seemingly to rescue you, but in actuality they've reacquired your services. It seems that during the 100 years of your exile, humans have discovered the remnants of technology that you left during your last hunt and they've used it for their own gains. Now, in the not-too-distant future, the city of your dishonor is run by numerous street gangs, consisting of junkies, voodoo practitioners, luchadores, and ex-porn stars (you can't make this stuff up, people). So the ruling Predators then send you back to Earth to clean up the mess you made.

How exactly you're supposed to do that is never made abundantly clear in the game. Your mission objectives typically revolve around finding specific gang leaders, or even just gang members walking among a crowd of people in the streets of the city, killing them, sometimes taking their head in the process, and then disappearing back to the rooftops. There are times when you can just swoop in and shank everyone in sight; there are other times you'll have to stalk your prey for a while by using the game's lame stealth mechanics; and then there are those times when you'll have to use your bits of Predator-brand gadgetry to lure your prey to you. The problem with all of the game's missions and mission objectives is that they just don't make a lick of sense. One moment you'll be stalking junkies that have some specialized (and ill-gotten) laser guns, and then the next, you'll have to intervene in a mugging. Why? Isn't this the Predator we're talking about? Shouldn't he only care about his prey, and not give a crap about a couple of junkies who beat up a guy for his wallet? And even when you are stalking a specific target, you never get a good understanding of why this person is even important in the grand scheme of things. Killing the gang leaders makes some sense, since they make good trophy kills, but you spend just as much time running around, stabbing mindless grunts and killing cops for seemingly no useful reason.

The actual mechanics of being a Predator don't translate particularly well into this game. Your basic combat tactics consist of finding a guy you need to kill, running up, stabbing him quickly (or slowly, if you use the power attack), and then running to the next guy. You get some other weapons, like a plasma cannon and a spear gun, but you rarely need them. You'll also be able to lay down some fairly grotesque executions of more powerful prey, either by simply killing them on the spot by ripping off their head or separating their top half from their lower half, or by actually going to the trouble of flaying them and then hanging their skinless corpse from a nearby rooftop. As adorable an idea as all this may sound, it, again, feels too easy and pointless. The executions are hilarious for exactly one time each, and then dull from there on out. Plus, if you've seen one skinless corpse in the game, you've seen them all.

The rest of the time you'll be jumping around assorted rooftops within the game's city and periodically cloaking yourself. The Predator is a nimble little minx and can jump very high and quite far when required. The whole city is designed like a big platforming level, with all sorts of carefully positioned rooftops and ledges for you to hop around. The problem is that the Predator doesn't handle in a very tight fashion, so it's easy to miss jumps just because you couldn't get a good handle on your jumping-off point. Also, once you're on the ground, you have to try to avoid being seen by the scattered groups of people wandering around the environment. In order to do this, you use the Predator's cloak technology. While the cloak does a decent job of at least confusing those nearby and eventually allowing you to get away if you're fast enough, people can still see through it if you're close enough, since there's still that whole visual distortion effect surrounding you. It makes sense in the context of the character, but it tends to make things needlessly difficult.

Needlessly difficult is a good description of the game as a whole. Between the only moderately useful cloak ability and the frustrating platforming, Predator is not a forgiving game on any level but the easiest. Further compounding this fact is the atrocious checkpoint system that always makes you start over an entire mission if you botch any part of it. For example, in one mission, you have to follow a gang leader as he goes from place to place doing various types of gang-related business. In the process, you also have to avoid a bunch of police cameras that, like people, can see you if you get too close, even if you're cloaked. Because the city is set up in such a convoluted and labyrinthine way, it is physically impossible to get through this mission until you've memorized each and every jump, as well as the gang leader's path, so as not to accidentally run into him. The whole game is littered with this kind of annoying trial and error, and it's not fun in any way.

You won't find much to like about Predator's graphics or audio, either. In fact, the graphics begin and end with the Predator model itself. It's clear that all the design and animation efforts went solely into making that model look as good as it could, and in fairness, the developers did a pretty good job with it. Unfortunately, everything else in the game is as bland as bland gets. The environments are ugly, blocky, and blurry, as are the models of all the people who wander around them. Their facial maps don't even move or animate in any way, not even during cutscenes. Though there's obviously an excessive amount of blood in the game, none of it looks that great, and, in fact, all the scenes of violence just seem very cheaply done. The PS2 and Xbox versions of the game are about on par with one another, which isn't saying much, since neither version really pushes their system's technology in any way. The audio consists entirely of bad voice acting from all the different gang types, a lot of roars from the Predator, some occasionally gooshy stabbing sounds, and a fairly unassuming soundtrack.

Once you've beaten Concrete Jungle (assuming you can actually bring yourself to do it), you'll have a challenge mode to play around with, as well as a bunch of unlockable costumes to dress the Predator up in. If playing dress up with the Predator and messing around with a bunch of weak challenges (that are actually worse than the already-mediocre main game is) don't sound like fun activities for you, then Predator: Concrete Jungle isn't going to be worth your time. There was certainly good stealth-action potential in the Predator license, but Concrete Jungle all but completely wastes it. 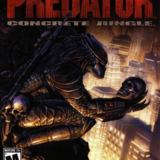