It's highly dubious as a measurable test of your logical mind, but PQ can still be a fun, challenging puzzle game.

Since the days of Tetris, it has been inferred that puzzle games are somehow a more pure intellectual pursuit than most any other type of video game. And with their abstracted settings and quietly cerebral gameplay principles, it's not hard for puzzle games to cop a vaguely academic tone. PQ: Practical Intelligence Quotient, however, takes the intelligentsia pedigree of puzzle games a step further, asserting itself as a legitimate gauge of your own mental capacity. It's not entirely successful to this end, but if you can look past its weird, cocky scientist vibe, PQ still offers some challenging puzzles that put a unique spin on some puzzle game standards.

Maintaining its analytical air, PQ is structured similarly to a pen-and-paper intelligence test. You're given 100 "questions," with each question being a 3D logic puzzle that you must solve. A score, based on the amount of time and the number of turns it takes, is given for each question, and once you've completed all 100 questions, your overall PQ score is calculated. There's an online leaderboard for you to compare your final score with other players, but there still isn't enough context for the PQ score to really mean anything.

The value of the PQ score is further diminished by a weird kink in the way you can retry questions. If you reset a question, all of the pieces will be restored to their original placement, but the time and turns you spent the first time through will still be used to determine your score for that question, theoretically providing a more honest score of your abilities to solve the question. However, if you quit out to the main menu, then retry a question, your time and turn count start afresh, thus making it easy to inflate your score. For a game that places so much importance on these scores, this seems like a pretty glaring loophole.

So, forget all the PQ score stuff. Without greater context and better control over the scoring, it's pretty worthless. But even when stripped of their greater overall purpose, the individual puzzles that you'll be presented are still inventive and can provide challenging tests of your capacity for calculations, memorization, spatial relations, lateral thinking, and predictive reasoning, often all at once. Each puzzle takes place inside a box, with your influence on the puzzle represented by the white silhouette of a person standing inside the box. The means can vary wildly, but your goal is always to get your avatar, from where it stands at the start of the puzzle, to the exit. Your avatar can move around the grid inside the box pretty freely, stepping up or down one level at a time, picking up and putting down smaller polygonal shapes, pushing and pulling larger shapes, and interacting with various types of machinery.

At their simplest, the puzzles in PQ will require you to shuffle around a few boxes that are obstructing your path to the exit, and they can literally be over in a matter of seconds. Higher level puzzles, though, can be so expansive and complex that you won't even be able to see the exit when you first start, and even when you do see the exit, there will be no clear path. If you manage to crack the puzzle on your first try, it can take a good 10 minutes to complete. The pacing of the game is usually purposefully slow and steady. However, there are situations that will test your reflexes, and it's at these times where the controls are a little clunky and slow to respond. These situations, thankfully, are few and far between.

The confrontation of your intelligence is definitely one of the main appeals of a good puzzle game, and PQ has that in spades. Unfortunately, the challenge is sometimes spiked with some frustration, largely because of PQ's 3D perspective. The camera remains locked onto your avatar through the course of the game, though instead of trailing behind the back of your avatar, the camera sticks to a specific perspective on the puzzle. You can use the shoulder buttons to quickly spin the camera 180 degrees in either direction. Also, the camera is smart enough to automatically tilt down if there is a tall object obscuring the view of your avatar. However, it can still be difficult to get a firm grasp of your surroundings at times, especially when dealing with the 3D maze puzzles.

Camera trouble notwithstanding, PQ has a clean utilitarian aesthetic that complements the quasi-intellectual tone of the game nicely. The black space that fills the voids in the grid is highlighted by glowing colored lines, adding color to a game that is otherwise virtually monochromatic. Flair is kept to a minimum, though the exits to each puzzle have a cyberspacey look to them, and you're treated to a cool-looking spectrum effect whenever you complete a puzzle. There's not a lot of sound inside the box, and the small sounds that your avatar makes when moving around and interacting with the environment are washed out by the droning, repetitive techno that's not aggressively bad, but not particularly endearing, or memorable, either.

PQ may fail as some sort of standardized test of your cognitive reasoning abilities, but those are admittedly some pretty lofty goals for a PSP puzzle game. If you're intent on proving just how smart you are, join Mensa or become a mathlete or something. But, if you're just looking for some deliberate and challenging puzzles, and you're willing to look past an interface that is occasionally awkward, PQ is a fine fit. 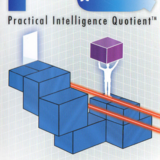 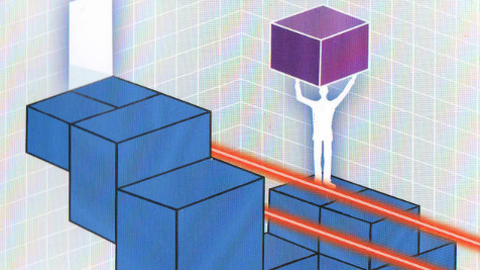 PQ: Practical Intelligence Quotient is a 3D puzzle game that tests your problem solving skills with a series of 100 logic puzzles.