Portal 2 is an accessible, clever, and downright hilarious adventure into the eccentric world of Aperture Science.

After the outlandish setting, ingenious gameplay, and hilarious dialogue had all run their course, Portal left you with some pretty big unknowns. Chief among them were, "What happens now?" and "How did that whole weird situation come to pass?" Portal 2 sets out to answer these questions, and in doing so travels both forward and backward from the conclusion of Portal. The result is a sequel that doesn't try to replicate the successful formula of its predecessor. Rather, it expands upon that original experience, creating something that feels initially familiar. Yet as you progress through the enthralling single-player journey and tangle with the clever cooperative campaign, any worries that things might be too familiar are swept away by the scope of your adventure and the characters you meet along the way. Once again, you are caught up in the fantastic world of Aperture Science, where hilarious and endearing dialogue is delivered by disembodied voices and artificial intelligences, and where inventive gameplay mechanics and a smooth difficulty curve make the sublime satisfaction of puzzle solving accessible to all.

The single-player campaign starts by addressing the issue of what happens now that you've destroyed the malevolent AI who tried to incinerate you. "Now" may be a relative term in the bowels of Aperture Science, but the facility you enter is still reeling from your actions at the end of Portal. Almost immediately, you meet a very helpful and attentive AI who wants to team up with you so that you both can escape dire peril. Despite looking like a metal basketball with handles and a camera lens, this AI is physically expressive and immensely entertaining. His well-meaning yet slightly inept persona is an immediate source of laughter that consistently delights throughout the game. Like that of its predecessor, Portal 2's writing is a standout. Not only is it packed with splendidly witty writing and excellent voice acting, but it also manages to create robust characters out of metal parts and thin air.

It's not long before you find an Aperture Science Handheld Portal Device (colloquially known as a "portal gun") and start slinging portals like it was 2007. Those unfamiliar with this technology need not fear: Portal 2 has a nice learning curve that quickly brings you up to speed. The basics are these: Using this gun, you can create two distinct portals on certain walls, ceilings, and floors. Go into one hole, and you come out the other. You start off learning basic navigation and then move on to transporting objects and experimenting with more complex moves, like jumping off a ledge into a portal below in order to fling yourself across the room. Getting the hang of this requires you to flex your spatial awareness, but the introduction is so smooth and intuitive that, before you know it, you're thinking in portals.

This may sound like a slow start to Portal veterans, and from an action standpoint, it is. It's a while before you encounter challenging puzzles, but the scenery is so different that you won't mind getting your bearings once again. Aperture Science has seen better days, and the broken test chambers, malfunctioning robotics, and encroaching plant life are an early sign that Portal 2's environments are much more varied and ambitious than its predecessor's. Later levels reveal the true scope of the Aperture facilities to great effect, piquing your curiosity and spurring you onward. As you work your way in and out of the damaged test chambers, you catch some intriguing glimpses behind the scenes. You also see a fair number of empty areas where the scenery fades into nondescript gloom, and these dull areas are a bit disappointing, given the busy industrial vibe of the place. You also encounter a lot of load times throughout the game, and though they rarely feel excessively long, they are often long enough to make you take notice and wish they were shorter.

While you are getting reacquainted with the basics of portals and trying to escape with your new friend, you run into your old test-administrator-slash-nemesis, GLaDOS. Though she isn't exactly happy to see you, she is glad to have a subject to run through test chambers and pester with sarcastic barbs. Her signature malevolence is alive and well, but those who have spent time testing with her before may find that her shtick has become familiar. She still has some wonderfully sinister lines, but her acerbic comments don't have the quite same shock value. Yet as you spend some time being shuffled through test chambers at her mercy, it becomes clear that her lack of bite is due to her injured self-confidence. After all, she fancied herself an omnipotent puppet master, and you tore her to pieces and threw every piece into a fire. She may be bent on your destruction, but GLaDOS is a complex character who evolves throughout these early levels. Before all is said and done, you'll once again come to cherish your relationship with that cruel AI.

A few hours into the campaign, the narrative focus expands beyond "What happens now?" to include "How did that whole weird situation come to pass?" In your explorations, you encounter new characters who provide some of the best lines in the game, and your AI companions evolve in surprising and gratifying ways. You also encounter a variety of new testing materials, from catapults to bridges made of light to gelatinous goos that splatter on surfaces and directly affect the way you move through the world. Portal 2 does a great job of introducing you to new tools and then challenging you to use them in clever ways. Successful navigation requires careful study of your environment and experimentation with the materials and surfaces available to you. There are some very tricky situations that you must puzzle your way out of, and figuring them out is always immensely satisfying.

The single-player campaign will likely last at least twice as long as your first Portal playthrough, clocking in at somewhere around seven to nine hours. Replaying it isn't very satisfying from a gameplay perspective, but with a ton of clever writing, some interesting developer commentary, and a bevy of achievements, a second playthrough is still appealing. Unfortunately, there are no stand-alone test chambers or leaderboards to really stump you or scratch that competitive itch, but even so, Portal 2 is not light on content. The cooperative campaign is an entirely separate, two-player experience that provides hours of exciting new puzzles and environments. You and your partner (split-screen or online) play as two robots that GLaDOS guides through a serious of test chambers. She's a bit disappointed that, as robots, you can't die horribly in the name of science, but that doesn't stop her from putting her perverse sense of humor to work. The robots provide a bit of physical humor themselves; their animations are a treat to watch, and seeing your partner bash into a ceiling is good for a chuckle.

There are some trips off the beaten path, but the action here is more akin to that of the original Portal--lots of clever test chambers that present an increasingly difficult challenge. Each player can deploy two portals of his or her own, and having twice as many portals allows a new degree of complexity. Again, the difficulty curve is fairly gentle, teaching you the basics before getting down to the tricky stuff. Teamwork is the name of the game, and some puzzles require some coordinated feats of timing. To help you communicate, you have a few simple visual indicators that you can place in the environment to direct your partner's attention or set a countdown timer for a simultaneous action. Verbal communication is very helpful as well, but if you aren't able or inclined to chat, these indicators are a surprisingly effective way to get your point across.

Cooperative mode also includes the Aperture Science versions of emoticons--little dances or gestures that you can perform for fun. Solving puzzles with a friend is definitely satisfying, but it's also a lot of fun to goof around. Shooting a portal under your partner's feet and transporting him in front of a moving spike plate may not be nice, but it's a great way to get him back for the time he disappeared the bridge from under your feet and dropped you into a pit of deadly goo. Your potential pool of friends to play with is expanded on the PlayStation 3, thanks to the ability to connect to Valve's online game platform, Steam, and play cooperatively with PC players. Through a simple in-game menu, you can log into your Steam account through your PS3 (or easily create a new account). This menu lets you view your Steam friends and read news about Portal 2, as well as track your Steam achievements, which are automatically updated as you earn the corresponding PS3 trophies. After a longer-than-usual initial load time, everything proceeds apace. While the cooperative campaign is shorter than the single-player one, together they provide 12 to 15 hours of very enjoyable, very accessible content.

As you journey through the massive Aperture facility, it becomes clear that Portal 2 does not merely come after Portal. Instead, it radiates outward from its predecessor, simultaneously illuminating the world that gave rise to Portal and continuing the adventure that began there. The sense of novelty is diminished, but the thrill of exploration and puzzle-solving is still intoxicating, and it's amazing how Portal 2 manages to tell a better story with disembodied voices and spherical robots than most games can with full-on humans. Your return to Aperture Science is a joyful one in this immensely appealing, laugh-out-loud funny, and thoroughly satisfying sequel.

If you're already playing Portal 2, be sure to check out our game guide which includes both a Story mode walkthrough and tips for cooperative play.

View Comments (4)
Back To Top
9
Superb
About GameSpot Reviews 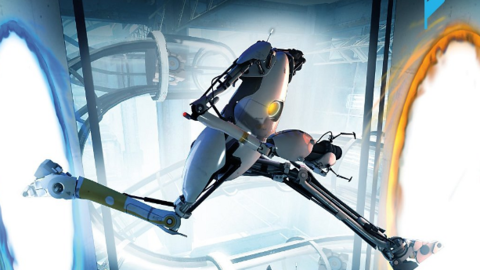 Portal 2 is a first-person puzzler game from Valve Software that draws from the original formula of innovative gameplay, story, and music, which earned the original Portal more than 70 industry accolades.