The foundation upon which the Pokemon series stands is firm and unyielding, meaning that catching critters and taking them into turn-based battles is its very essence. Pokemon X/Y--the first of the main series to make it onto the 3DS--is the same Pokemon experience at its core, which means it's a compelling adventure driven by complex rock-paper-scissors-like gameplay and a charming cast of hundreds of creatures to capture.

However, Pokemon X/Y is not just a copy of what has come before. Pokemon X/Y's foundations are surrounded by a scaffolding of new features that build upon its gameplay fundamentals. You will love the new ability to tinker with each individual pokemon's base stats, for example, and some gameplay frustrations have been ironed out to create a more enjoyable experience for old-school players and newcomers alike. For example, the ability to tinker with each pokemon's base stats is a great addition since it affords you an opportunity to optimize individual combatants for your play style. Perhaps you value speed above all else for the pokemon that you send out first but prefer others in your party to focus on damage output or survivability; these traits are malleable, and can really make a difference when you're well-trained team has its back to the wall. Whether you're a pokefreak or a trainer who hasn't played since the days of Red and Blue, Pokemon X/Y is easily the most enticing entry in the franchise in years.

A lot of what makes it immediately enticing is its upgraded visuals. The move to full 3D environments and characters--a first for the main series--makes Pokemon X/Y not only the most gorgeous-looking Pokemon game ever, but also one of the better-looking games released on 3DS to date. It's impressive to finally see your pokemon battle it out as more than low definition 2D images, and the nicely detailed character models truly add to the connection you feel with your little critters. You'll wince as your expressive pokemon grimaces in pain after being struck, bite your lip in anticipation as a pokeball struggles to contain a freshly caught creature, and marvel at some of the sights you see in your travels.

Kalos, the region in which this particular adventure is set, is lush and green for the most part, with fields of colorful wildflowers adding vibrancy to the countryside. Some of the buildings you find yourself in are impressive as well. The bug pokemon gym, for example, sits atop a delicate spiderweb with dew hanging off its threads, while the electric gym puts you in a series of gaudily lit game-show-like sets. The camera does a good job of keeping things visually interesting, shifting angles as you move from location to location to give you dynamic views of the environment.

But the highlights of the game are the pokemon themselves. One of the hallmark features of the Pokemon series has always been the charming designs of its creatures, and they're shown off to great effect here. There are, unfortunately, quite a lot of shared animations in battle (such as the butt-facing shake of Tail Whip or the forward hop of a Charge), but the hundreds of pokemon feature enough unique moves and twitches that their personalities shine through regardless. You know an Azurill is a happy chappy by the way he bounces on his blue balloon, for example, while a little wag of Fennekin's bushy tail signals she's impatient for you to make a move. Pokemon attacks have some serious visual impact, too. Water pokemon lift high into the air on a column of blue water when initiating the surf attack, while the devastating laser-like beam of an Oblivion Wing looks like it could hurt. Pikachu and his pals have never looked so good.

With Super Training, trainers can now significantly alter any of their Pokemon's stats, boosting areas where they're weak or further improving on their strengths.

Its looks may be a major step forward, but Pokemon X/Y is still rooted in the series' classic tropes. Little about the core gameplay or the adventure you undertake is wholly new. You're a young trainer travelling the region and collecting data on pokemon, and along the way you run across a nefarious scheme being concocted by a group of villains (in this case, Team Flare). Team Flare has an interesting evil plot, and you'll come across a few lovely moments involving a major character and his beloved pokemon, but for the most part, the narrative, as always, plays second fiddle to the gameplay itself.

The core mechanics of capturing pokemon, using them and leveling them up in battles, exploiting type weaknesses, all to eventually defeat eight gym leaders and become the regional champion, remain the same. Pokemon games have long had a knack for bringing out latent compulsive tendencies, and X/Y is no exception. The game is still a compelling mix of strategy and collection. Pokemon X/Y adds a new type of creature to the mix, meaning its rock-paper-scissors-like mechanic of exploiting specific type weaknesses has become even more intricate. The thrill of playing out a well-executed battle where you successfully manage to prey on your opponent's weak points while minimising yours has long been one of the main joys of Pokemon, and it's still strong in X/Y.

There's more pokemon to catch than ever before, too, with this game's Pokedex spanning all of the previous games in the series. This means you'll see plenty of new and familiar faces.You'll find yourself relentlessly scouring patches of wild grass to try to capture that one elusive pokemon you know is hiding there, and you'll curse your bad luck when a random battle begins with a type mismatch against you. You'll become obsessed with your pokemon's stats, analyzing and comparing one creature against the other to see which is superior. And while the game's returning mechanics remain invigorating, other core aspects of the series remain frustrating. For example, the random encounter nature of dungeons and grasslands can still get annoying when all you want to do is make it to the next gym, and the storage system that you're forced to keep all but six of your pokemon in at all times is unwieldy enough that individuals can be difficult to find unless you devise your own system for organizing them.

Thankfully, there are positive additions too, the most significant being super training. In previous games, a pokemon's base stats could be only marginally affected through the use of specific items. With Super Training, trainers can now significantly alter any of their pokemon's stats, boosting areas where they're weak or further improving on their strengths. Stats can be improved by playing a series of minigames, and pokemon can even continue to train while you're playing the main adventure, through the use of gym bags you find as you play. You can concentrate your training on improving a Venusaur's special defense rating, for example, giving you a grass-type creature that can survive long enough against a fire type to eventually escape. Or you can significantly improve your Lucario's speed, making sure this heavy hitter always hits first. Super Training adds another complex layer of strategy and planning to the game, and is sure to be especially important when taking on other real-world trainers in Pokemon X/Y's multiplayer modes.

It's a great-looking game whose visuals can finally match the inherent charm of its many potential Pokemon protagonists.

The other new additions Pokemon X/Y brings are somewhat less impactful. Mega evolutions let certain pokemon temporarily evolve past their final stage during a battle. A mega evolved Pokemon's stats get significantly boosted, so for the most part, you always want to trigger these as soon as you get into a scrap. Mega evolutions play into your battle strategy only when you have more than one pokemon on your team with the ability, since you can mega evolve only one creature on your team per match. Another addition is Pokemon Amie, a Nintendogs-like mode where you can pat and feed your pokemon and play minigames with them to boost their affinity with you. It's admittedly charming to try to find where your fiercest-looking pokemon likes to be tickled, but while there are tangible benefits to having your pokemon like you, Pokemon Amie feels like a distraction at best.

Other changes make the game less of a grind. For one, you receive an Experience Share item early in the game that can split experience points among your entire party. This, coupled with the fact that you'll find a good range of pokemon types within the first few hours, means the grind that used to be necessary in previous games as you tried to cover any weaknesses you had before an impending gym battle is, for the most part, gone. It's quicker to move around the world now, too. You're given rollerblades very early in the game this time around, and you'll receive a bike soon after. There's also a taxi service that can take you to major points around Kalos, making it easy to quickly jump from one spot to another.

In fact, Pokemon X/Y is a less-challenging game than previous entries in the franchise. You're given some pretty solid pokemon by characters within the game, so it's likely that the team you have within a few hours in the Kalos region may be good enough to take you through the lengthy single-player campaign. The game, however, does an admirable job of tempting you with new creatures. Each different area you come across features a good mix of new pokemon to capture, and as always, they're levelled up sufficiently to match any challenges you'll find in the location you're in, making swapping to newly caught creatures a viable and attractive option.

Things only get truly challenging near the end of the story missions, when the game throws trainers and gym leaders at you that take some careful planning to defeat. Pokemon's postgame content is actually some of the best it has to offer, with new areas opening up and even more challenges appearing, significantly extending the life of the game past the 30 hours a straight run of the main campaign takes. Pokemon X/Y also has several multiplayer features, including a variety of battle modes, a global trading system for captured pokemon, and ways to support your friends through the awarding of temporary boosts. It's a comprehensive online offering, and it makes you feel more connected than ever before to other pokefans for battling or trading.

To put it in terms a Pokemon professor would understand, Pokemon X/Y is a welcome evolution in this long-running franchise. It's a great-looking game whose visuals can finally match the inherent charm of its many potential pokemon protagonists, and its engrossing core has been enhanced by the new additions to its gameplay. Pokemon X/Y isn't quite a mega evolution of its numerous predecessors, but like a dark move played against a ghost- or psychic-type pokemon, it doesn't disappoint.

View Comments (707)
Back To Top
8
Great
About GameSpot Reviews 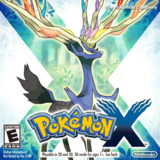 Randolph Ramsay played Pokemon obsessively in his youth, and particularly loved the original 151 in Red/Blue. While he skipped the Black/White games, he still managed the watch the anime, so he’s Team Snivy all the way. Randolph finished Pokemon X/Y in around 35 hours for the purposes of this review.