Battle Revolution caters to Pokemaniacs looking to wring every last drop out of Pokemon Diamond and Pearl, but it's pretty worthless to anyone else.

The joys of Pokemon can be a difficult thing to explain to those who haven't been hooked. From a distance, the core Pokemon games look like standard-abiding Japanese role-playing games, and the changes that the series has undergone over the years have usually been subtle. The pieces might not be revolutionary, but they fit together with a precision that makes for an RPG experience that's accessible, highly engaging, and lasts a long time.

Pokemon Battle Revolution takes place on the island of Poketopia, a place where Pokemon trainers can go to battle other like-minded Pokemon trainers to their hearts' content. There are a few ways you can go about this, though the best of them involve interaction with Pokemon Diamond or Pearl for the DS. The DS battle mode is the simplest, and in a way, it best exemplifies what Pokemon Battle Revolution is all about: making Pokemon fights look cool. Using their active Pokemon from Diamond or Pearl and the DS itself as the controller, two to four players can have a good old-fashioned Pokemon throw-down as big, polygonal versions of the pocket monsters go through the motions on the TV.

In addition to the local multiplayer options, Pokemon Battle Revolution can be played online against other players and is the first game for the Wii to hit the US with live online functionality. It's a no-frills affair where you can choose to battle randomly against other trainers or directly challenge any trainer with whom you've exchanged friend codes. The bummer here is that your friend code for Pokemon Battle Revolution is different from the friend code for the Wii itself. It's not too different from how the DS works online, and Nintendo has stated that it plans on assigning discrete friend codes for any Wii games that go online. So, it's not surprising, but it's still kind of a hassle.

You can also import any Pokemon you've captured in Diamond or Pearl into the colosseum mode, where you'll get to make yourself a trainer from a few basic models and fight your way through a series of different colosseums. You will earn money from your victories that can then be used to buy new clothing and baubles for your trainers. You can also purchase mystery gifts that can be transferred back into Diamond or Pearl, though that's the extent of the flow of information back to the DS. If you don't have Diamond or Pearl, your options in Pokemon Battle Revolution are more limited. All of the DS connectivity stuff is obviously of no use. In the colosseum mode, you can't build your own trainer from the ground up; instead you have to choose a prefab trainer who comes with a set group of Pokemon. You can still play dress up with the trainer that you choose, but you're stuck with whatever Pokemon come with that trainer. You'll eventually gain access to other trainers with whom you can trade, but it still feels limited.

Even if you can take advantage of the game's DS connectivity, the underlying problem is that all of the glimmer of seeing Pokemon duke it out on your TV doesn't make up for the fact that the battles just aren't that involving. You pick which of your Pokemon you'll bring into battle, and you pick one of their four attacks. Then you sit back and watch as the Pokemon pummel each other. In the core Pokemon games, the repetitive nature of the battles is compensated for by the fact that it's a means to an end: Your Pokemon grow stronger, you capture new Pokemon, and the story progresses. In Pokemon Battle Revolution, the battles are an end unto themselves.

What is perhaps most disappointing about Pokemon Battle Revolution is its half-hearted job of making the fights look exciting. The Pokemon themselves, the trainers, and the colosseums all look good, if a bit aliased, but there's just no drama to the action. The game manages to make watching the trainers throw out the pokeballs look exciting, and some of the attacks have a good amount of flash. However, there are also a number of really plain-looking attacks, and those are the ones that you seem to see repeatedly. Most of all, the way the trainers interact the Pokemon in the ring just looks stagy and stiff, as if they're all just going through the motions. It's also worth noting that there's a ridiculous play-by-play announcer who goes from accidentally amusing to repetitive and grating within the first hour. Thankfully, he can be muted.

Because Pokemon Battle Revolution incorporates the DS into the action and introduces online play to the Wii in the US, it should be more exciting. But when you get down to it, the action itself is straightforward and single-minded to a fault. This may be a forgivable shortcoming if the very idea of seeing the Pokemon you've spent hours and hours training in Diamond or Pearl is enough to get you excited, but for everyone else, it's even less appealing than a real Pokemon game. 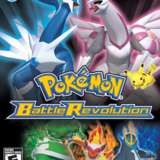