Get ready for one of the most absorbing puzzle games on the DS.

It's easy to see why the original Picross DS resonated so strongly with avid puzzle game enthusiasts and nongamers alike. Blending elements of Sudoku, crossword puzzles, paint-by-numbers, and Minesweeper into an ultimate puzzle stew, this ridiculously addictive little game is a delightful time-sucking black hole of fun. If forming amusing pixel art images by solving 2D logic-based picture puzzles held you in its thrall, or if you don't even know what a nonogram is, you won't be able to pry your fingers away from the stylus once you get a taste of these mind-bending puzzles steeped in 3D. Picross 3D takes the same puzzle concepts that made the original game so enjoyable and builds on them masterfully. Solving each puzzle to uncover the 3D object encased inside of it is more like chiseling away at a rock sculpture than solving a Sunday crossword. This great new approach to the familiar gameplay makes the formula all the more engrossing.

Picross 3D throws in a few twists that take a couple of minutes to wrap your head around, but the first chunk of the game includes an in-depth tutorial that makes the transition from 2D to 3D easy to understand. In each puzzle, you're given a block made up of smaller gray cubes arranged in a solid 3D grid. The goal is to reveal the hidden object inside the mass by removing all of the extraneous blocks until only the cubes belonging to the secret object remain. Because every cube is the same color, the only way to determine which ones to keep and which ones to destroy is to analyze the numbers found on certain blocks, then follow a logical process of elimination to remove the unwanted extras. Blocks you want to keep can be easily marked or unmarked, while those you want to get rid of can be smashed by tapping them with the stylus. Most stages give you a generous time limit, though you're only afforded five mistakes before you have to restart the puzzle. Breaking too many of the wrong blocks sends all your hard work spiraling down the drain. On the upside, it can also make things easier on the next attempt.

Staring at a 3D hunk of blocks littered with numbers can be intimidating at first. Thankfully, there's no math involved. You simply have to use logic to decipher what the numbers mean and carefully break blocks until you're left with a neat object, critter, or person made of 3D pixel art. The numbers on different blocks tell you how many pieces of the hidden object are found in a given row or column. Plain numbers indicate that the sequence of blocks is connected in a solid line, numbers that appear within a small circle indicate the sequence is divided by a single gap, and numbers that appear in a square indicate that there are at least two gaps in the sequence. Zeros mean entire rows can be deleted, which is what you'll want to look for and eliminate at the start of each puzzle. Dragging the stylus around the screen rotates the block formation up to 360 degrees side-to-side and 180 degrees top-to-bottom. You'll need to rotate most puzzles, scour the cube clusters from all angles, and get a full picture to solve most stages. For thicker formations, you can use "slicers" to temporarily peel back layers of blocks to reach the otherwise inaccessible cubes inside. The D pad lets you quickly switch between the paint-brush tool for marking blocks and the hammer tool for smashing them. Digging into the puzzles is made even more enjoyable by these straightforward and smooth controls.

It takes a little while to learn how to read the puzzles. However, once you get familiar with the core rules, the gameplay mechanics become second nature. Meticulously hammering away at blocks and freeing the clever pixilated creations that live inside of them becomes dangerously addictive after you overcome the initial learning hurdles. Then, you can free up your mind to focus on the challenges thrown at you. Both the blocky masses and the curious items hidden inside of them grow larger and more complex as you progress. The difficulty curve is gradual, increasing slowly throughout the course of many levels, so you get plenty of practice before tackling the brutes waiting for you later in the game. For added incentive, Picross 3D has a simple rating system for each puzzle that helps keep you moving through the game while also offering an incentive to revisit earlier levels. You earn a single star for simply clearing a puzzle, two stars for clearing it without messing up, and a perfect three-star rating for clearing it perfectly within the green time limit on the counter. Fully completing tiers unlocks new levels and more challenging puzzles. Every so often, you also run into special levels with slightly different rules. One-Chance Challenge stages can only be completed without making a single mistake, and Time Challenges have you frantically solving portions of a puzzle in order to add seconds to the countdown clock.

With more than 350 puzzles in all, there's a tremendous amount of content to explore. Even if you happen to exhaust all of those stages, the game lets you create your own puzzle items with an easy-to-use editor. Using the Nintendo Wi-Fi Connection or a local wireless connection, you can download and play puzzles that others have made or share your own creations. The variety and overall level of charm found in the hundreds of items you uncover is equally impressive. Objects are arranged into about 80 different themed collections, including various species of animals, different kinds of humans, home appliances, fantasy warrior items, fruits or veggies, holiday gifts, and much more. Completing each puzzle reveals the hidden object, colors it in, and gives it a fun little animation. You can access all of the collections and animations from the menu to track what you've found so far. While the pixel-art objects and their animations are quite enjoyable, the game's overall presentation lacks polish in some areas. The menu systems in particular are underwhelming, and the strange animated block critter that hangs out on the top screen is a bit of a head-scratcher. Though backgrounds can be swapped out to suit your taste, a more unified and clean visual look with a more appealing color scheme would have been a better fit.

A disappointing presentation doesn't mar the inherent brain-boggling fun you find in this exhaustive collection of puzzles. Picross 3D is still a great game with tight gameplay that makes excellent use of the DS's features. It provides a wonderful progression into a new and interesting dynamic for the core game that will delight existing Picross fans, as well as usher in a whole wave of converts. 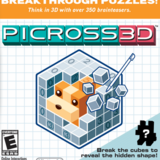 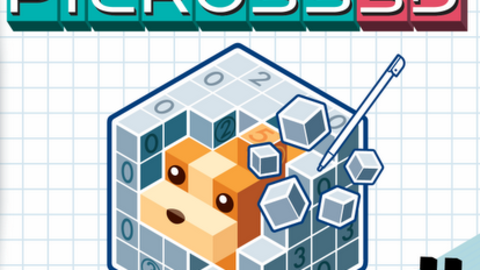 Picross 3D blends the logical challenge of a number-based puzzle with the excitement of discovering the hidden objects.