Trials and Tribulations is yet another enjoyable Phoenix Wright game--just don't expect anything new.

The Phoenix Wright series has been an unlikely success story in North America. The games have been able to overcome slow pacing, as well as lack of innovation, thanks to likeable characters, engaging storylines, and great music. The same holds true for the third game in the series Phoenix Wright: Ace Attorney Trials and Tribulations. It does absolutely nothing new with the established formula, but fans of the series will be just fine with that because it has all the gameplay and characters they've come to expect from a Phoenix Wright game.

Like the previous Phoenix Wright games, Trials and Tribulations places you in the role of a young attorney named Phoenix Wright. But this time, you'll play as a few different people, not just Mr. Wright. A few of the game's five cases take place several years before the present day, so you'll get to see an awkward college-aged Phoenix find out about his deceased mentor Mia Fey's past and catch up with a few old friends. Returning characters are both a strength and a weakness for the game. Certain people like Maya or the adorable Pearl are always so dynamic and likeable that they add to the experience, even if their situations change little from game to game. But with other characters, it feels like the developer just got lazy. There's a character from the last game that's on trial again for murder and Larry Butz is still a moron that appears in just about every case. That's not to say there aren't any new characters; it's just that with the exception of Prosecutor Godot and young Ms. Hawthorne, many of them aren't very well developed or are downright annoying.

Like the first two Phoenix Wright games, the writing in Trials and Tribulations is top-notch. The dialogue is well written and natural with humorous pop culture references sprinkled in by writers who have a knack for keeping things from getting too serious. Not many games can get away with nods to Alanis Morissette, Bob Marley, The Rock, and even Mister Rogers' Neighborhood in the middle of a murder investigation.

Even though Phoenix Wright is a defense lawyer, you'll spend much of your time out in the field talking to witnesses, examining crime scenes for clues, and then presenting those clues to witnesses to learn more about the case. But not everyone wants to cooperate. Some people have deep, dark secrets that they don't want to share. These secrets are protected by psyche-locks, which can only be broken when you've accumulated enough evidence. They were an interesting way of mixing up the gameplay in the last game, but they don't feel as fresh the second time around.

Courtroom proceedings are unchanged as well. Witnesses will testify, and the defense must find contradictions in their testimonies. This can be done by pressing for more information during cross-examination. When a contradiction is found, you can yell "objection!" into the DS, or if you don't feel like making a spectacle of yourself in public, you can just tap the screen and then present evidence or character profiles that back up your objection. You'll want to be sure that you have some evidence when you object or the judge will penalize you for your mistake. If you make too many mistakes, you'll be doing a large part of the case over, but you can avoid this by saving often and reloading your save file when you mess up. The ability to save then restart at any time is both a blessing and a curse. On one hand, it renders the penalty system completely pointless, but on the other hand, it makes the game less frustrating because once again there are times where you just don't know what evidence to present. Thus, the only way to figure it out is through trial and error.

It's the developer's unwillingness to change this established formula that holds the third game back a bit. You'll still have times where you can't advance the story because you failed to present some random object to some random person. None of the DS-specific features, such as the cool 3D evidence or fingerprint identification introduced in the bonus case in the first game, were added to this one. This is a shame because there were certainly plenty of times where it would have fit in nicely. But none of these problems ruin the game because it's still long and enjoyable.

And it's a nice looking one too. The animation and artwork of the returning characters have been recycled to the point that even Al Gore thinks Capcom got carried away, but they still look good, as do the new characters. Even with just a few frames of animation, the game can instantly convey a person's mood. The new backgrounds are also nicely done, fitting right in with all the backgrounds and areas that are back for a third time. Seriously, isn't the guard in the detention center tired of standing at that door?!

The music in Trials and Tribulations is fantastic. This is one area where Capcom's incessant recycling of assets doesn't hurt the game--each person's theme song fits him or her to a T. Just a few bars into Maya's happy-go-lucky theme and you'll know just what kind of person she is in the game. Equally fitting is the intense music that plays when the stakes are highest at crucial points of the trial.

With the next game in the series set to focus on a whole new cast of characters, Phoenix Wright: Ace Attorney Trials and Tribulations brings this three-game story arc to a satisfying conclusion. It's just a shame that Capcom didn't do more to spice up a formula that feels a tad bit stale here. If you've played and loved the first two Phoenix Wright games--flaws and all--you'll be plenty happy with Trials and Tribulations. It's a good game. Case Closed. 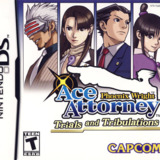