Justice for All is a good, lengthy adventure with great character-driven storylines, but it fails to build upon the promising groundwork laid by the first game.

Though it only made its first appearance in North America last year, Phoenix Wright (or Gyakuten Saiban) has been a popular series for the Game Boy Advance in Japan for quite some time. The first game released outside of Japan, Phoenix Wright: Ace Attorney had all four of the cases found on the Japanese GBA game plus a Nintendo DS-exclusive case that made more extensive use of the handheld's touch screen and improved graphical capabilities. Thanks to an engrossing story, endearing characters, and engaging gameplay, the game was a surprise hit. Now the second game, Phoenix Wright: Ace Attorney Justice for All, has been released, and like its predecessor, the story is top-notch and the characters are great. But the game fails to live up to the original in several ways. None of the cool DS-exclusive features introduced in the final case of the previous game are here, and far too often the game attempts to create intrigue and suspense with the same types of twists and turns from the original. Justice for All is still a very good game, but it's hard not to feel as if it's a step backward for the series.

Justice for All is a story-driven adventure in which, once again, you play the role of Phoenix Wright, a defense attorney renowned for his belief in his clients' innocence, as well as his ability to translate that belief into a verdict of "not guilty." And, once again, you'll be exclusively defending people accused of murder. After you're presented with the facts and take the case, it's up to you to visit different locations to look for clues and interview witnesses. When you've gathered all the information you can find, it's off to court, where you'll have to pull out all the stops to prove your client innocent. As they were in the first game, the cases are fascinating; there's rarely a dull moment. In fact, the pacing is slightly better here. Over the course of the game's four cases, you'll defend a policewoman accused of killing another officer; help an old friend who's in a tight spot; get to the bottom of a murder in which the perpetrator levitated from the crime scene; and even question your own moral fiber in the harrowing final case.

What made the first game great, and what's without a doubt this game's biggest strength, is the characters, many of whom return from the first game. It really does feel as if you're catching up with old friends the first time you see Maya and Mia Fey, the Judge, Detective Gumshoe, Lotta Hart, Will Powers, and even crusty Ms. Oldbag. You'll also find out what Miles Edgeworth has been doing, and you'll even take on Von Karma in court. You certainly get more from this game if you played the first one, but the game generally does a decent job of providing enough backstory that you'll understand what's going on with the returning characters. But it's not all about the returning folks; many of the new people you meet along the way prove to be just as endearing as those from the first game. There are the zany performers from the Berry Big Circus, the "director" nut job at the Hotti Clinic, and little Pearl, who is about as cute and adorable as a video game character can get.

As you did in the first game, you use the touch screen to examine profiles, view evidence, press witnesses for more information, and, of course, raise objections so that you may present evidence. You can really get into character by yelling "Objection!" into the DS's microphone. However, you can't object anytime you want to; you need to be prepared to back up your statement. You lose health when you're unable to substantiate a claim, and when you run out of health you'll have to start from the last save point. The big new feature in Justice for All is the "psyche-lock," where you'll literally see chains and locks appear over a person when they have a secret that they don't want to share. To break these locks and reveal the truth you'll need to collect evidence and then confront them with said evidence until they break down and spill the beans. The psyche-locks are an interesting addition to the mix, but as the sole "big" new feature, they're underwhelming.

Quite a few issues have carried over from the first game. First, the game is extremely linear. There aren't many wrong paths you can take, and there's only one possible ending and culprit for each case (with one minor exception). You always know that if you screw up, the game will give you another chance--or you can simply load your previous save. When you're in court trying to prove a point, the connection between a question and a person or item is occasionally so incredibly vague, you'll often have to resort to guessing as to what response is appropriate. Should you guess wrong, you can take your punishment from the judge and try to play fair, but that could involve starting the same case over multiple times, so it's easier to save and restart often. It would also be nice to deal with crimes other than murder and for some of the cases to perhaps be a little shorter. You can finish the first one in an hour or two, but the last case will probably run you about eight hours. Long, memorable cases are all well and good, but these cases are drawn out the same way, time after time. Witnesses will repeatedly lie while on the stand yet never have their testimony stricken from the record, prosecutors manhandle the judge when things aren't going their way, and really, is anyone falling for the false finishes where the Judge says, "Well, I think I've seen enough to render a verdict," 10 minutes into a case?

Justice for All may be text driven, but that doesn't mean the visuals aren't important. The character designs are outstanding, and the game uses a bright, colorful palette to make them attractive. Characters will move their mouths as they talk and are generally stationary, though each person has a host of animations that allow them to react (mostly) realistically to what's happening. The people you encounter will react with rage when accused of something, cry or show fear when things are looking grim, and celebrate when the case is over. Unfortunately, it feels as if the developer cut some corners on the presentation this time around. Many returning characters have the exact same animation that they did in the first game--they're even wearing the same clothes. Many of the locations from the original game are recycled and are completely unchanged, too. The courtroom is the same, as is the detention center, Phoenix's office, and a few other locations.

Other than hollering "Hold it!" and "Objection!," there's no speech to be found, which is OK because despite a handful of errors, the localization of the text is outstanding. It's impressive that Capcom was able to translate such a text-heavy game so smoothly and even toss in nuggets from Top Gun, Finding Forrester, and The Fresh Prince of Bel-Air. There's hardly any speech, but there sure is plenty of music, which is uniformly outstanding and used masterfully to not only convey characters' personalities, but also to create suspense, sorrow, and excitement throughout the story. You'll hear a few familiar themes from the original, but most of the music is new.

Justice for All is an entertaining, lengthy adventure with great storylines and memorable characters, but in the end, it's a bit disappointing when you consider how fantastic the original was. The cool DS-exclusive features introduced at the tail end of the first game are missing, the plot twists are often predictable, and the game is still extremely linear. Fans of the original game will certainly enjoy the sequel, but even they will probably feel somewhat let down. If you've never played a Phoenix Wright game before, the first game is clearly the better of the two, so you'll want to start there before picking up Justice for All. 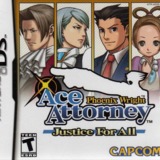 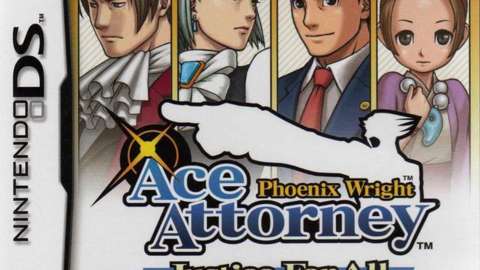 Phoenix Wright: Ace Attorney Justice for All returns to the Nintendo DS for more courtroom adventures.

8.6
Sign In to rate Phoenix Wright: Ace Attorney - Justice for All