Persona Q2 Review - You Oughta Be In Pictures

One more show for the road.

It looks like the 3DS's time in the spotlight is over. We've seen 3DS support dwindle over the past few years, but there's at least one more show to see on the long-lived portable before it takes a bow. Persona Q2: New Cinema Labyrinth brings the familiar casts of Persona 3, Persona 4, and Persona 5 together for a meaty RPG adventure that lives up to the reputation of its big-screen counterparts. If Persona Q2 winds up being the last big event on the 3DS, it's a fine way to end the handheld's run.

Persona Q2 begins with Persona 5's Phantom Thieves on a routine mission when they find themselves in a movie theater with a creepy projectionist and two avid filmgoers. With seemingly no way out of this strange miniplex, the team find themselves engaging with film on a whole new level: exploring the elaborate, first-person dungeons contained within the projections. These twisted takes on superhero, disaster, and sci-fi films aren't just dramatizations; they feature familiar faces and scenarios with potentially deadly consequences for the Phantom Thieves. It also appears that a few other folks may have stumbled into the cinema world, so it's up to you to find the others, help them all band together, and reveal the mystery behind this strange theatre as one big Persona-using team.

Much like the previous 3DS game, Persona Q, Q2 eschews many of the concepts seen in the primary Persona games, instead going with systems derived from Atlus's Etrian Odyssey series of first-person dungeon-crawlers. You conduct careful, step-by-step mapping of themed labyrinths, but rather than explore with your party and enemies visible on a map, you face random encounters. While Persona proper has you exploiting enemy weaknesses for extra turns in combat, in Persona Q2 critical hits and enemy weaknesses boost your combatants for their next strike. Limited-inventory item management, side-questing, and team composition are all crucial, and Q2's stand-in for Etrian Odyssey's freeform character-building--the ability for all characters to equip power- and skill-augmenting sub-Personas--allows you to assemble a team of formidable fighters provided you make good calls with Persona fusion and skill inheritance. It feels like Atlus took the best elements of both game series--Etrian’s sense of adventure, exploration, and danger, and Persona’s elaborate collection/fusion systems and character interactions--and worked to make them meld together as best they could.

The stark differences in gameplay might throw Persona fans who aren't familiar with Etrian Odyssey's quirks for a bit of a loop, but Persona Q2 has some nice quality-of-life enhancements to make things a bit easier to adjust to. For starters, you can set the game to auto-map a good chunk of the dungeon on its own, saving you time you'd normally spend drawing squares and walls for your map on the bottom screen--though you'll still need to fill in some other details on your own. Helpful indicators aid you with planning for battle; an icon indicates how close you are to a random encounter happening, while dots on the map indicating the fearsome roaming FOE sub-bosses change color based on how much of a threat they are to the party at their current level. Enemy weaknesses in battle will be highlighted once they have been discovered, and should you ever find combat a bit too much to handle, you can freely change the difficulty via the in-game options to make things a bit easier. And if things go south, you'll be automatically healed to max the moment you step outside of the dungeon. This helps make things more inviting to new players who might not be used to the Etrian Odyssey style of play, and are good quality-of-life improvements in their own right.

But while the gameplay needle swings further to the Etrian Odyssey side of things, the presentation of the story, character interactions, visual flair, and music are pure Persona through and through. From the moment the bite-sized Persona 5 cast first appears on the screen, you know you're in for a game full of cute, fun character interactions. There's plenty of story and dialogue both in and out of the dungeons, and while there are some serious moments, it tends to be more on the humorous side overall. (It's several hours of game time before most of the Persona 3 and 4 cast show up, so if you're a purist fan of either of those two titles, you might be waiting a while before your favorites join.)

There are even character-bonding “Special Screening” side-quests that are somewhat similar to Persona’s much-beloved Social Links, but with a lot more dungeon exploration and fighting. These are a smart way to bring Persona’s social-development gameplay into the mix while giving the player more gameplay meat to chew on. Finishing these quests can yield extra Unison Attack skills between characters (with a supremely adorable associated animation) that provide varied beneficial effects.

Visually, the game makes the most of the 3DS' limited hardware. The characters' tiny renditions are charming and faithful to their original designs, the environments are distinct and memorable, and many of the game's cinematics are rendered in-engine, adding to a strong overall sense of visual coherency. The only real knock here is the recycled enemy designs, many of which are still leftover from the days of Persona 3 on the PS2. The music is also top-notch, featuring many new and familiar compositions that are as earworm-y as you'd expect from a series known for catchy tunes.

There are a few minor irritations, but they don’t steal the show. Having a big crossover cast from Persona 3, 4, and 5 is great for story and character vignettes, but there's so much overlap between character combat archetypes and specialties that you'll probably wind up sidelining most of them. That might not sound so bad, but there's no passive EXP gain, and sometimes you'll encounter lucrative Special Screenings where you're asked to use a specific character or a difficult battle where one character archetype works particularly well -- and those members lagging in levels will be a pain to level up unless they’re “motivated.” (There are items and quests that expedite this somewhat, but many of the items are paid DLC.)

Combat can also feel wildly unbalanced at times. In an effort to add Persona-style elements to Etrian Odyssey's combat, Persona Q2 incentivizes you to knock enemies down and boost your fighters by targeting enemy weaknesses or landing critical hits, somewhat similarly to Shin Megami Tensei IV. However, fighting sometimes feels so skewed towards weakness exploitation that it can make the difference between a quick, momentary encounter and a drawn-out, messy slog. If you don't have access to whatever skill an enemy's weak to, you're generally forced into less effective physical combat in an effort to conserve valuable skill points, and your ability to lock them down goes out the window. It's frustrating to wander into a new area, fight a new enemy, and then watch them mop the floor with your team because you don't have the one thing they're weak to on your current squad. Not being able to swap Personas mid-battle, as you can in mainline Persona games, makes this issue worse. Thankfully, once you do know and prepare in advance for enemy weaknesses, it’s much easier - but the trial-and-error part can be somewhat irritating.

But a few annoyances don't drag down Persona Q2 significantly. As a dungeon crawler, it's challenging and engaging, but doesn’t drag or feel overwhelming. As a piece of Persona fan service, it delivers the goods with delightful crossover character antics and an enjoyable theme. It all combines into a solid little RPG that can keep you hooked for its entire runtime. The curtains may be closing on the 3DS, but Persona Q2 is a terrific way to end the show. 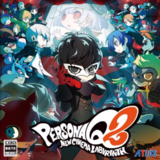 Heidi has played a whole lot of Persona and Persona spin-offs in her many years of reviewing games. She still has a soft spot for Persona 3, and she only accepts the Persona 3 Portable heroine as the canonical lead... but fortunately, Persona Q2 does too! She put 65 hours into Persona Q2, mostly on Normal difficulty, for this review. Code was provided by the publisher.