Chances are that if you're interested in Persona 4 Arena Ultimax (P4AU), you fall into one of two camps of players: the folks who cherish competitive fighting games and their intricate mechanics, or the crew who adores the characters and intricate storyline of the Persona role-playing games. The original Persona 4 Arena (P4A) was a successful attempt at marrying what both of these groups would want in a game, and much like the original releases of Persona 3/4 (and seemingly the whole fighting game genre), the game has now been granted a vastly expanded release in Persona 4 Ultimax.

Atlus and co-developer Arc System Works have gone out of their way to make sure that this new edition comes with enough new content to justify the asking price. For starters, the game features six new characters out of the box: two versions of antagonist Sho Minazuki (with and without persona); a newly combat-ready Rise Kujikawa; and Junpei, Yukari, and Ken from Persona 3. Three more characters will be made available at a later date (though at the time of this writing, only Adachi and Marie are available, both of which are free for a limited time and $5 individually at a later date). In addition to this, the majority of the cast gains a "shadow" character mode that dramatically alters key elements of the fighting engine. Besides the significant roster expansion, the game features a completely new and quite long story mode that picks up after the events of P4A, along with a challenge mode called Golden Arena.

Golden Arena is a particularly fun time-killer, and one that will remind series veterans of scaling the tower of Tartarus. In this mode, you trek through dungeons filled with opponents, besting them in order to level up and boost stats that increase your fighting prowess. Even the level-up screen is a neat throwback to the presentation of the original games. Golden Arena is similar to survival modes in other fighting games in that you have to beat opponents back-to-back, but you don’t have to worry about energy management. The ability to customize your character with stats of your picking and helpful skills is a nice strategic element.

Online play also sees some noteworthy improvements. Enhanced player profiles and room-searching carry across both versions, but one particularly cool interface is a PlayStation 3 exclusive: a virtual arcade. Here, you can create a cute little Persona-themed avatar and search for matches and lobbies by trotting around various familiar environments refashioned to look like arcades, seeing information about the matches in progress and the players therein. It’s a nifty feature that functions well for the purpose of finding sparring partners, though it’s a shame it’s only available on one platform.

For competitive fighting fans, however, the biggest draws are the new characters and the various gameplay additions. As you might expect, the existing cast has seen some tweaks and additions to their movesets, though the most significant change to the base game is the addition of "shadow" versions for most characters. Shadows control similarly to the original characters, but lose the ability to burst out of lengthy combos or as a last-ditch meter-filling attack. In its place is a frenzy, which gradually drains the meter used to execute super moves, but allows unlimited uses of said moves while it's active, which can dramatically alter a character's offensive capabilities.

The new characters are varied, and each brings something unique to the table. Sho comes in two flavors: with and without persona. The latter variety exchanges the benefits that persona-wielding for some fierce strikes, while the former plays in a more orthodox style. Yukari is a projectile-heavy zoning character who utilizes distance attacking to frustrate foes. Ken and Koromaru tag-team to defeat opponents with long-range normal, youthful determination, and fierce animal instinct--that is, unless Koromaru gets KO'ed, since he’s got his own separate health bar. Rise has unique skills like sending out explosive musical notes and putting opponents in a "scanned" state that alters certain attack properties, while Junpei can transform the arena into his own private baseball field, earning massive buffs by hitting with certain attacks and scoring runs. Adachi can play with powerful buffs and status ailments, and Marie works with various trap setups to keep foes on their toes while working with a unique weather mechanic for boosting attacks and recovering health.

If you're more into Persona games than into one-on-one fighting, however, the main draw here is the extensive story mode, which consists of two distinctly different episodes--P4 and P3--which highlight the characters from each respective game. While the presentation is much the same as it was in the original P4A's story mode--text and voiceover accompanying stills showcase what’s happening, and are punctuated by actual player-controlled fighting--the flow has changed significantly. Instead of each character having a distinct route of varied length through story mode (and some characters' stories unlocking others), the viewpoint here switches amongst the entire cast throughout. This means you experience events from the vantage point of--and fighting as--multiple characters. (Also of note: if you really aren't confident in your brawling skills, you can opt to the have the computer fight for you in this mode, essentially turning story mode into a visual novel.) The mode is uncommonly in-depth and lengthy, encompassing many hours' worth of text, dialogue, and fighting across the two different stories.

Story mode is enjoyable, but it isn't as engaging as the previous game's. Sho Minazuki isn't as interesting or nuanced a central figure as Labrys was in P4A, and you never get the opportunity to delve deeply into his character and motivations. The lengthy lead-up to the final revelations and confrontations here contain a lot of repetitive situations and dialogue. Yes, the power of bonds with others was a central theme in Personas 3 and 4, but the way this theme is constantly brought up here made me want to make like the P4 crew, poke my head into the television, and shout "I get it already."

When the characters are interacting with each other, however, they're an absolute delight, and it's always great to see how they react to meeting faces that are new to them (but familiar to us). Ken, Yukari, and Junpei--who are all newcomers to the fighting side of things--receive a great deal of development that shows us where their lives led them post-Persona 3. An epilogue shown after finishing both stories puts a period at the end of many characters' stories, leading the way for the upcoming Persona 5. Thus, despite some disappointments in the way the plot plays out, the story mode and the closure it brings is something devout Persona 3 and 4 fans will wish to experience.

P4AU still seems just a bit confused about how to accommodate players who are intimidated by fighting games. It does a few things to try to help newcomers out: controller motions quite easy, consisting primarily of quarter-circle-forward and double-tap inputs for special moves; you perform auto-combos with every character using the light attack button; and special moves can be executed by simply holding down a button for a certain length of time. Yet the good intentions seem misplaced, as these additions don't help players to learn fighting game fundamentals, and may in fact be a hindrance. (Holding down a button takes longer to execute than a command input, for example.) The barebones tutorial only teaches the controls, rather than the situations in which the controls should be put to use, and there's little to explain characters with unique gimmicks like Junpei's baseball buffs. Considering that Arc System Works made the excellent tutorials seen in the Blazblue series, the lack of something similar here is both puzzling and disappointing.

Taken as a whole, however, P4AU is a great package. The fighting is solid, there's a lot to keep you occupied in both single-player and multiplayer modes, and the new characters and additions refine a game that was already impressive to begin with. While it doesn't always hit knockout blows, P4AU remains a very strong contender in the fighting game arena. 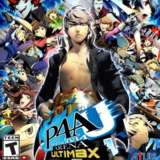 Heidi’s been fervently playing--and reviewing--the Persona titles for many years now. While she’s a little bit sad that P4AU’s story mode wasn’t quite as good as hoped, she also appreciates how it wraps up a lot of the various character stories. Bring on Persona 5!