Payday 2 brings crime to life with an alluring intensity that entertains in spite of some rough edges.

In crime, as in game development, things don't always go as planned. A suspicious passerby might call the cops in early, and then those cops might phase through a wall. The loot you expect to find might not be there, and the end-of-heist reward you're hoping for might never arrive. Civilians might try to flee in the middle of a firefight, or they might disappear through the floor. And yet, despite the potential pitfalls and the actual flaws of Payday 2, things have a way of coming together. The tension of planning and keeping things quiet, the excitement of asserting control when all hell breaks loose, and the satisfaction of a successful score outshine any dull spots, making Payday 2 an immensely enjoyable way to team up for a life of crime.

As part of the four-man crew of Hoxton, Chains, Dallas, and Wolf, you are contracted to do jobs by a dude named Bain. He sets you up with various shady characters and presents you with a city map of constantly changing opportunities. There are around 10 distinct jobs that pop up regularly with varying difficulty levels that affect how hard and how lucrative they will be. Some are stand-alone gigs, like bank heists, store robberies, and nightclub burglaries, while others span multiple days and involve stealing art, cooking meth, transporting drugs, dealing with gang members, and stealing from senators.

Mission objectives are generally clear, though there are a number of subtleties to contend with as well. Some challenges can be mastered by experience; it won't take you long to memorize the floor plan of the bank, and you quickly become familiar with the penalty for setting off alarms in the art gallery. Others require you to be flexible; cameras and security guards aren't always in the same place, and even doors, safes, and getaway spots can vary from mission to mission. This mix of constancy and variability does a great job of making you feel more confident with each mission while simultaneously keeping you on your toes. You can never be perfectly prepared for a job, and that's the way it should be.

Unfortunately, there are also some things that are more difficult to prepare for. Strange happenings with civilian and police character models, walls that you can pull solid objects through, and other technical oddities crop up throughout Payday 2. They usually have only minor effects on your criminal activity, but they do add a sour note to the otherwise welcome unpredictability. Such issues aren't likely to derail your heists, but they are occasionally enough to turn your stealthy infiltration into a messy affair.

Keeping things quiet is one of the biggest challenges of Payday 2 because so much can go wrong. A suspicious civilian might see you put on your mask. A security camera might spot you at a distance. A guard might round the corner when you're not expecting it. The guy on the radio might not believe you when you pretend to be the guard you just knocked out. Or someone, somewhere might hear the tinkling of broken glass, and before you know it, the cops are on their way and your escape van has bugged out. Completing a job without the cavalry showing up triggers a rush of giddy satisfaction, but more often than not, you're going to have to shoot your way out.

Once the alarm has sounded, the cops are on their way, but you can still manage the situation. Taking civilian hostages delays the armed escalation, keeping the really tough enemies at bay for a while. Moving your loot to a defensible position, closing the metal shutters on a store, or finding planks to board up a window can help you hold out while you wait for your drill or lock pick or computer hack to work its magic. Meanwhile, the cops come at you, and you gun them down in droves. The gunplay is solid and the AI is aggressive, but combat is more of a war of attrition than a contest of skill. Stick around long enough, and you will inevitably be overrun, no matter how skillfully you delay and fend off the advancing waves. On tougher jobs, there is more loot to grab than you can easily get away with, tempting you to try to hold out a bit longer to get a fatter payday. Get too greedy, however, and all is lost. Payday 2 channels this classic criminal conundrum nicely, right down to the heated mid-battle disagreements between team members.

And you must have human team members if you hope to succeed at any but the most basic jobs. Friendly AI characters shoot cops and revive downed players just fine, but they don't attempt much else. Playing with a team allows you to plan your approach, adapt to the situation better, and get away with more loot. The limited number of maps means that most players have a good idea what to do and when to do it, but being able to communicate is still very important. The PC is the best platform to find talkative teammates using either voice or text chat. The Xbox 360 is the runner-up thanks to the prevalent headsets, while the PlayStation 3 lags far behind with very few talkative players.

Being on the same page as your crewmates also allows you to bring complementary skills to each job. The basic equipment options let you replenish health, resupply ammunition, jam electronic signals, or set explosive traps. As you level up and earn money and experience points, you unlock new purchasable weapons for your arsenal and are rewarded with skill points that you can put toward a variety of abilities which also cost money. (Sense a theme?) Some of these skills merely make you better at what you can already do, letting you do more damage and take less, move more quickly and quietly, and perform a variety of contextual actions more efficiently.

Other skills open up entirely new strategic possibilities. Wielding a saw as your primary weapon lets you cut through some doors and crack open ATMs. Why kill a guard when you can intimidate him into handcuffing himself or convince him to fight on your side? Reviving teammates from a distance, converting your trip mines into safe-blowing charges, equipping an automatic sentry gun, and bagging and hiding bodies are just some of the other abilities that can completely change the tempo of your jobs. It's rewarding to work toward new skills and exciting to put them into action.

Tailoring your weapons to the job at hand can also be gratifying, but the path to satisfaction isn't as reliable. You unlock weapons steadily, but weapon attachments like scopes, suppressors, stocks, barrel extensions, and the like are only doled out in an end-of-round lottery event. You may get a nice new gun attachment, but you might instead end up with a small cash bonus or materials to craft a new mask. Mask crafting is an amusing, if expensive, diversion, but this random reward system can be frustrating for players looking to improve their arsenal. Even a simple suppressor can be hard to come by, making stealthy successes even more unlikely. Some of these imbalances have been addressed in patches, while other issues persist. The PC and PS3 seem to be the most frequently updated versions, with the Xbox 360 yet to receive similar attention.

Though the PC is clearly the best platform for Payday 2, you can have a rollicking good time regardless of what system you're using. The systems and mechanics all have small flaws and limitations, but they come together to set the stage for exciting heists that you'll want to pull again and again. As long as you can find some felons to fight alongside, Payday 2 is an addictive and challenging criminal pursuit. 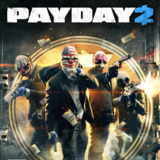