The game simply can't make the act of firing a weapon interesting, and this plagues every mode in it.

Though the overused backdrop of World War II has probably surpassed it recently, science fiction and first-person shooting still go hand in hand. The near-future settings of many action games let developers both insert all manner of laser guns into them and spin tales of futures gone awry. Digital Extremes' Pariah is just such a game, giving users access to a small arsenal of impossible weaponry, while having the story take place in a war-torn world of the future. While the backdrop may still have some life left in it, Pariah's combat, story, and weapons loadout are all positively lifeless, making the game feel like nothing more than an also-ran shooter that barely stands on its own, let alone stands up to the genre's best.

The story in Pariah is convoluted and does a terrible job of keeping you in the loop. You play as a doctor named Jack Mason, and the game opens with Mason on a transport ship, escorting a mysterious woman who's been frozen in stasis. You're flying over the Northwest, which is enemy territory that's under control of prisoners, when missiles blast into the side of your ship, sending you crashing to the ground below. The woman escapes, and now it's up to you to find her. And apparently, she's toting some sort of virus around in her system that, as luck would have it, ends up getting transferred to you within the first couple of minutes of the game. While it starts out with a reasonable and potentially interesting premise, Pariah barely explains itself, so you're never too certain about who's who, who your enemies are, and what, exactly, you're doing.

Pariah has a slow, methodical pace to it that's reminiscent of Halo due to the way Mason's life meter works. It starts out with four blocks of health in it. When you're hit, some of that health is chipped away. But if you back off, any partially filled blocks will eventually regenerate. Restoring full blocks requires you to switch to a healing tool, which requires ammo, like any other weapon.

The weapons in Pariah seriously lack punch. On top of that, the ammo that's in the clip of a weapon is not treated as part of your overall reserve. So if your magazine is half full but your reserve ammo is full, you'll have to manually switch to a weapon and then reload it before you can collect the ammo. This is sort of sloppy, and it just makes picking up items a hassle, since you'll always want to make sure you're as fully loaded as possible. As for the guns themselves, the basic assault rifle is ineffective, the plasma gun feels utterly weak, and the shotgun equivalent is mostly harmless. The sniper rifle is OK for taking out targets from a distance, though the game doesn't give you many opportunities to put it to good use. The other two weapons are explosive, literally. The rocket launcher takes forever to reload, making it about as effective as the sniper rifle. The grenade launcher, however, comes in handy, especially if you're good at properly arcing grenades toward your targets. But it only becomes interesting after you upgrade it.

Aside from your melee attack, each one of your weapons, including your healing tool, can be upgraded three times by collecting pickups that are scattered around, usually in somewhat out-of-the-way locations. You can upgrade your weapons whenever you like from the radial weapon-select menu, and you can essentially spend your upgrade points as you see fit. Upgrading usually increases the amount of reserve ammo you can hold, but it also does things like add heat-seeking functionality to your rockets, in addition to providing enhanced vision for the sniper rifle and reduced recoil for the assault rifle. The best upgrade, though, is for the grenade launcher, which lets you use a remote detonator to blow up your grenades whenever you see fit. This is handy for taking out airborne targets or for just tossing a grenade and waiting for enemies to cluster before taking them all out. You can also hop into the occasional vehicle throughout the game, which serves only to reinforce the "Halo, but sort of broken" feel.

The enemy behavior in Pariah seems to be governed by the flip of a coin. Heads, the enemies will rush you and try to punch you out. Tails, they'll run backward at full speed in search of cover...and they'll just sort of keep running. You can give chase, sure. But if you just stand still, they'll eventually run right back up on you, only to repeat the process. Their fast movement does occasionally make them difficult targets to hit, though, and when you get into tight quarters, their accuracy is good at cutting you down quickly, even on the easiest difficulty setting. Design-wise, the enemies are a boring group of clones. Shooting them in their helmets causes the helmets to pop or smash off, and they rarely have any interesting death animations.

The rest of Pariah looks pretty good. With a mixture of wide-open outdoor areas and vaguely futuristic indoor environments, the Halo influence really stands out. But Pariah's got a good frame rate if you're running on a PC that meets or exceeds the system requirements. Also, little touches like good-looking water and decent explosion effects make the game look good overall, especially at higher resolutions. The sharper graphics make the PC version of Pariah a bit better than its Xbox counterpart.

A big part of why Pariah's weapons feel so underpowered is the game's sound. The weapon-fire effects just don't have anything behind them, making even your rocket launcher blasts sound wimpy. You'll run into some music here and there, and it'll interactively ratchet up and down when you encounter enemies. The game has its share of speech, as well. Enemy troops tend to repeat themselves way too much during play, and the voices in the cutscenes are pretty uninspiring.

Beyond the single-player campaign you'll find a pretty standard multiplayer component for up to 32 players, though at the time of this writing, there aren't many people playing the game online. The matchmaking is done well, and it is similar to Xbox Live in that you can choose to jump right into a game via an "instant action" button, or dig a little deeper by using a series of server filters, bots, and a mapmaker. The online support is functional, letting users play deathmatch, team deathmatch, capture the flag, and so on. You can also play against bots, but they aren't much smarter than the single-player enemies. Furthermore, the weak weapons make for poor combat, so there's no good reason to play this game's multiplayer unless you get way into the mapmaker. The mapmaker is surprisingly easy to use and fully featured. You can raise and lower land quickly and easily, and dropping prefabricated objects around the map doesn't take much time at all. Unfortunately, you'll have to play Pariah on these maps, which sort of renders them moot offerings.

There aren't many differences between the PC and Xbox versions of Pariah other than the obvious ones, but these things do help the PC version to stand out a bit from its inferior console counterpart. The PC version looks better, has better control, and retails for ten dollars less. On the other side, the cutscenes are more compressed on the PC, making the Xbox cutscenes look a little sharper.

Pariah seems to be built on the concept of "if you liked Halo, then try this one out." But the game simply can't make the act of firing a weapon interesting, and this plagues every mode in it. When you toss in cutscenes that don't move the story along in a useful way, you've got a game that doesn't live up to the standards of the genre. The PC has certainly done better than Pariah, so there's no need to spend time trudging through its uninteresting adventure. 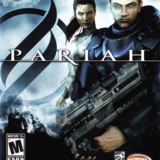