Paper Mario: Sticker Star's many charms make it a sweet and worthwhile adventure, though a few flaws interfere with its feel-good attitude.

Mario has had many incarnations over the years, but Paper Mario is perhaps the pluckiest of all the portly plumber's personas. The way he moves, his feet cheerily kicking up dust, suggests an unflappable willingness to face any challenge. He never talks, but his steady demeanor speaks volumes; he is a happy hero and a faithful friend. One look at that mustachioed visage and you know that he is good and kind and true right down to his papery core. It's a pleasure to be reunited with this incredibly charming character and to explore the lovely papercraft world of Paper Mario: Sticker Star. Mario's cheery outlook is contagious, and you'll often be happy to accompany him on his latest adventure, but it's easy to find yourself stuck for extended periods, during which the joy gives way to frustration. In the end, however, happiness triumphs over all else; it's worth sticking through the tough spots with Paper Mario and seeing this adventure reach its cheery conclusion.

Sticker Star begins during the annual Mushroom Kingdom holiday of Sticker Fest. People gather at the festival grounds in the hamlet of Decalburg to celebrate stickers, and to make wishes on the powerful sticker comet that comes to visit the town each year. Alas, this year, Bowser ruins everybody's fun by leaping for the comet, absorbing some of its power himself, and scattering five wish-granting royal stickers far and wide across the kingdom in a maelstrom of sticker-fueled malice. Bowser makes off with Princess Peach (of course), and Mario joins up with the feisty caretaker of the royal stickers, who is herself a crown-shaped sticker named Kersti.

The story isn't special, but the writing sure is. Sticker Star possesses the smart, witty humor that's typical of the Paper Mario games. It's just a shame there isn't more of it. Though Kersti is almost always with you, Sticker Star can feel a bit lonely at times, and where games like the outstanding Paper Mario: The Thousand-Year Door were brimming over with memorable characters and funny moments, Sticker Star could have used more of both. But this land of papery forests, deserts, caves, and oceans is nonetheless a treat to explore. Smiling koopas, goofy goombas, and other enemies shuffle happily around each stage, bringing the world to joyous (if slightly dangerous) life. And the flat characters are particularly striking in 3D; at times, you can almost believe that you're gazing at an actual papercraft display.

In the wake of the Sticker Fest disaster, it's not just royal stickers that were sent far and wide across the land. Stickers of all sorts are now stuck to surfaces just waiting to be peeled off, which is lucky for you, because you're gonna need 'em. Early on, you get a sticker album, and as you peel stickers from walls, knock them out of blocks, or purchase them with coins, they get placed in your album. Ordinary stickers have names like jump, hammer, and fire flower, and only by spending these stickers can you attack your enemies during Sticker Star's turn-based combat.

It's an unusual system that encourages you to think about your attacks in a way that you don't have to in a typical role-playing game. When confronted with a group of weak enemies, do you finish them off in one turn by using a somewhat-rare shiny shell sticker, or do you take a few turns to do it, using run-of-the-mill stickers like worn-out jump and saving that shiny shell for later? Stickers are plentiful throughout the world, so it's unlikely--though possible--to find yourself running out; the trick is learning to use the right sticker in every situation. There's a steady curve as you progress through the game; you start finding rarer, shinier, more powerful stickers, which are also often larger, taking up more of the finite space in your album. It's satisfying to start harnessing the power of these stronger stickers and to become more skilled and efficient in your use of stickers as you advance.

The whole idea of spending stickers may seem wrong; after all, anyone who was ever a kid with a sticker album knows that stickers are meant to be collected and carefully smoothed into place. Fear not! In Decalburg, there is a sticker museum that is just waiting for one of each type of sticker to be added to its permanent collection. Once you've placed a sticker in its frame on the wall, you can gaze at it to your heart's content, and read a bit of information about it in the "sticky wiki." Having a permanent home for your stickers gives you a reason to hunt down one of each type, and the rarity and elusiveness of some stickers give you incentive to poke your nose into every corner of Sticker Star's charming world to find them.

Not every sticker you can slap in your album starts out as a flat object with adhesive on it. Certain three-dimensional objects have made their way into this papery land. An enterprising Toad in Decalburg takes advantage of this phenomenon by setting up a stand where Mario can take these so-called "things" and fling them against a wall, flattening the objects and creating what the Toad cleverly refers to as "thing stickers." (He's "a bit of a marketing genius," you see.) It's amusing to see Mario hold aloft the more mundane things--tape dispensers, air conditioners, vacuum cleaners, and the like--the way heroes in other games might triumphantly hold up a powerful new sword or a sacred artifact.

The uses of stickers aren't limited to combat, either. With Kersti's help, Mario can "paperize" any environment. Paperizing causes Mario's three-dimensional papercraft surroundings to fall flat like a Polaroid. It's a neat-looking effect that, in certain places, reveals a spot where you can place a sticker, or a loose scrap of the world--a cave entrance, for instance--that you can peel off and put in its proper place. Some of the game's puzzles require you to use the right thing sticker in the right spot, and working out the solutions to these puzzles results in some of the game's most rewarding and memorable moments. (What thing do you need to clear away mountains of crumpled paper? The answer is both logical and delightful.)

But the hunt for the right thing sticker can also bring the game to a halt. To defeat a boss, for instance, you might need the aid of a specific thing sticker, but it's entirely possible that you missed the thing you need when you passed through the stage where it's located. Kersti has basic advice to offer you in some situations, but in dilemmas like this, she has nothing useful to say. This leaves you with no option but to return to stages you've already completed, playing them again and again, trying to be sure to leave no rock unhammered and no screen unpaperized, lest you miss the thing you so desperately need.

Exploring stages in search of things and secrets as you make your way through the game is enjoyable. There are many well-hidden rooms, and stumbling upon them carries with it a pleasing sense of discovery. But hitting a brick wall in your progress and needing to find a thing that could be in a number of places makes this normally cheerful adventure an irritating exercise. The joys of your quest outweigh its frustrations, but blemishes like this do hold Sticker Star back from greatness.

Aside from the focus on stickers, the combat in Sticker Star is similar to that in earlier Mario RPGs, and that's a good thing. With well-timed button presses, you can increase the strength of a hammer strike, squeeze in a few more jumps on an enemy's noggin, or otherwise improve your attacks. When you're on the defensive, you can press a button to block briefly, potentially reducing the damage of incoming attacks. It is now, as ever, a fun battle system that keeps you engaged in combat from one moment to the next. Fights move along at a breezy pace, and the cute characters and papercraft playset backdrops in which clouds might hang from the ceiling on visible pieces of string help to make these battles cheerful. And by spending a few coins, you can fire up the battle spinner, a slot machine that gives you a chance to use two or three stickers in a single turn. This is a whimsical way to try to get an edge on your tougher foes.

However, one aspect of Sticker Star's structure makes combat feel less meaningful here than it often does in RPGs. Unlike in other Paper Mario games, there are no experience points to be earned here, no levels to acquire. Hearts you periodically find increase your maximum number of hit points, but aside from this, Mario's power never goes up. Defeating an enemy might reward you with some coins and maybe a sticker or two, but it also costs you stickers. As a result, there's often little incentive to fight those enemies who aren't directly in your path, aside from the fun of fighting, and that can wear off when you're fighting koopa paratroopas for the 25th time and could nail the attack timing with your eyes closed. You can always try avoiding enemies if you don't fancy a fight--they typically dash at you when they spot you but can be eluded--but you still find yourself in too many battles with enemies who are no longer interesting to fight, and without the reward of XP, these interludes can feel like pointless interruptions of your progress.

Thankfully, making your way through stages is otherwise enjoyable. This isn't a platformer, but there's enough leaping on swinging platforms and avoiding deadly hazards to give Sticker Star's gameplay a pleasant Mario feel. Nods to memorable stages from early Mario games pop up from time to time, and the quest keeps you on your toes by throwing you into a number of unexpected situations. Mario finds himself in one fix after another, and before all is said and done, you'll have completed all sorts of death-defying feats, like riding a raft down a treacherous river, busting some ghosts, and even competing on a game show. Sticker Star falls into a rut at times and may even drive you crazy, but in the end, Paper Mario's unwaveringly cheerful attitude, and fond memories of the game's many great moments, will be what stays with you. 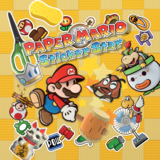 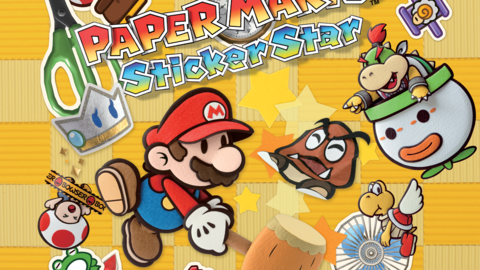 Paper Mario: Sticker Star has players help Mario to recover the six Royal Stickers which are stuck onto Bowser and his underlings.