Pain is the video game equivalent of breaking fine china with a hammer: it's simple, crude, and not very cost-effective, but still rather satisfying.

Pain is a fine example of what can be done with the Havok physics engine, some destructive urges, and little else. It twists its basic principle of using a fleshy crash-test dummy as slingshot ammo into several compelling single- and multiplayer modes, all of which tap into the same primal urges that make watching a car crash or popping bubble wrap so compelling. It's not a terribly intellectual game, and apart from the Rube Goldberg punishment routines you can put your puppet through, it's never very complicated; but damn if it doesn't make for some misanthropic fun.

The underlying mechanic in Pain has you loading up a guy into a guy-sized slingshot then launching him into the world, usually with the intent of inflicting as much pain on both your character and the world around him. You can adjust the angle and power of the shot before you launch. Once you're in the air, you've also got a pretty significant amount of drift control over your trajectory. Holding one of the face buttons as you sail through the air will make your guy stretch his hand out in one of four directions, allowing him to grab onto objects in the environment. Holding one of the face buttons in conjunction with either the L1 or L2 buttons will cause your guy to strike one of a number of generally stupid poses, which can earn you bonus points, allow you access to hard-to-reach spots on the map, or just make it easier to inflict specific types of damage to your character's anatomy.

Once your guy makes contact with any part of the environment, he turns into a floppy, Havok-powered rag doll, though you can still nudge him in different directions with "ooch," an ability that will refill at regular intervals as long as your guy is still in motion. There's also super-ooch, a more potent, single-use version of ooch, which you can charge up by shaking the Sixaxis vigorously. In addition to being fun to say, ooch is a critical factor in getting the most out of each launch, and judicious use of ooch can make a single launch last for several minutes. Ooch can be kind of finicky as well, and you need to use it as soon as you earn it. As we found from our experience, a full ooch meter can randomly disappear at a moment's notice. As long and detailed as the game's mandatory tutorial is, the inner workings of ooch remain somewhat mysterious.

Pain builds a number of modes around these mechanics, and they all deliver different takes on the same basic "throw guy at stuff" premise. Paindemonium is a basic sandbox mode where your only concrete objective is to rack up as many points as possible. And, really, half the fun of Pain is figuring out different ways to hurt your guy and break stuff. The mime toss mode is more focused, requiring you to launch your guy toward a mime that's suspended in midair, grab him, and then hurl him through a bunch of panes of glass. Your goal here is to break all the glass as quickly as possible, with as few throws as possible, and the complexity of the various, unpredictable physical forces you're dealing with can make this a serious challenge. Spank the monkey has you targeting football-loving monkeys as they appear in different locations on the map. It gets a little bit tricky when the game starts challenging you to take down multiple monkeys at once, but it's still kind of shallow and probably the least compelling of the single-player modes.

On the multiplayer side, you've got three different modes from which to choose. There's horse, which goes by the basic rules of its basketball namesake, though without the basketballs. After the first player launches, the next player has to make contact with one of the items that the first player did while also beating his or her score. Bowling is a two-player game that has you launching your guy at a standard 10-pin setup, though the fun twist here is that the other player can trigger various explosives during your turn and a well-timed telephone booth flying at your face can turn a strike into a gutter ball real quick. The fun-with-explosives mode litters the level with explosive crates, and each player tries to bounce off more of these crates than the last. The multiplayer modes, especially bowling, really amplify what's great about Pain, which makes the fact that there's no online play kind of a downer.

As great as the Havok physics engine is at simulating impact, velocity, momentum, and the relative value of Pi, or whatever, there are still times when it seems like you lose speed more quickly than you should. The camera can also be frustrating at times, occasionally changing perspective at inopportune moments or simply getting stuck on the other side of a solid object. The biggest complaint to be lodged against Pain, though, is that for the current $9.99 asking price, it feels a little lean.

You've got your default guy Jarvis, plus a second unlockable character, and you've got one level in which you can unlock a second configuration. Jarvis fills his role of masochistic stuntman enthusiastically, and he's got plenty of alternately stupid, agony-induced things to shout. The downtown level that comes with Pain is dense with explosive and destructible objects that you can bounce your guy off of, with no shortage of great nooks and crannies to explore. It's a decent-looking level, jammed with small visual jokes and oblique references to such movies as Fletch and Revenge of the Nerds II: Nerds in Paradise, though it's apparent that the physics require more of the PlayStation 3's muscle than the presentation.

Still, the volume of content you get can make it feel like you're just playing a demo at times. It's already apparent that Sony intends to flesh the package out over time with premium downloadable content, and as eager as we are for more Pain levels, we could've used more stuff from the start. Pain is almost more of a toy than a proper game, but it's a really good one. 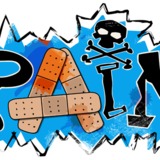