Overwatch is an exercise in refined chaos. There are multitudes of layers hiding beneath the hectic surface, and they emerge, one after another, the more you play. This is a shooter that knows how to surprise, one that unfolds at a frantic pace, one that takes a handful of great ideas, and combines them into something spectacular.

At first glance, it's a simple formula: two teams of six vie for control of mobile payloads, capture points, and key strategic positions. Each of its four modes are easy to grasp, serving as the foundation for the various maps and the powerful heroes colliding within them. That apparent simplicity is deceiving, though. Overwatch is an amorphous, shapeshifting organism that mean different things for different players, depending on which hero you choose, and what role you assume within the context of your team.

The quality of Overwatch, as a hero shooter, relies on its fighters. And these 21 heroes, both in terms of personality and design, compose one of the more distinct and diverse casts in recent memory. Their dialogue hints at relationships among the group. Their art design conveys a stark visual vocabulary. Their abilities set the stage for multidimensional firefights with explosions, energy shields, and bursts of sonic energy. There's an enticing balance between mastering one character and trying someone completely new.

Each of these characters could be the center of their own game. There's the dwarf engineer Torbjörn and his upgradeable defensive turret. There's the ape scientist Winston, with both superior intellect and animalistic rage. Then there's Tracer, the British pilot removed from the rules of space and time, warping around the battlefield and reversing her actions to correct mistakes she might have made seconds before.

Like Tracer, Overwatch functions as a sort of time machine, borrowing elements from the shooter genre throughout its evolution over the years. Some of Overwatch's characters display the arena combat of Quake, while others capture the dynamism of the more modern Titanfall. Overwatch's cast also includes a more archetypical military-shooter character, Soldier 76. He serves as a gateway for players more accustomed to Call of Duty or Battlefield, ushering them into a more nuanced and versatile overall experience.

These heroes may be the bricks comprising Overwatch's structure, but the map design is the mortar in between. Skirmishes play out across 12 locales in a futuristic version of Earth, from the foundries of industrial Russia to the shrines of rural Japan. These arenas mix high walkways and low pits, narrow sightlines with wide avenues. Battles change constantly, choke points become virtual morgues, and learning to use your character's range, damage, and special abilities is contingent on what the environments dictate. Variety in map design is one thing--precision in their layout is another entirely. And Overwatch is precision incarnate.

What's impressive isn't Overwatch's ambition--its attempt to bring all these different factors together under one roof. What's impressive is that it fits these characters and interactions into an organic being, with ever-changing scenarios that keep Overwatch fresh through each match. It helps that you can switch heroes mid-match according to the ebb and flow of each situation.

There's an enticing balance between mastering one character and trying someone completely new, and watching new layers unravel.

But even more vital is the ease with which Overwatch teaches you valuable lessons. Playing becomes a digging process, and as you discover new ways to use each character on each map, how better to serve your team, and how to counter your most dangerous opponents, Overwatch's deepest layers begin to emerge.

Imagine defending the last waypoint in Japan as the attackers escort their explosive payload to within yards of victory. Your team is spread around the room, on the upper catwalks and out in the open, standing in the way and keeping the opponents at bay. As the explosive expert Junkrat, you're launching grenades into clumps of enemies. You're laying bear traps to cover the walkway at your rear. You're disrupting the position of shield characters with the blast from your remote mines.

But you're also watching your teammate's back as she snipes with Widowmaker. You're calling out enemy positions to Pharah as she glides above the fray with her rocket launcher ablaze. You're coordinating with Zarya, waiting until both of your ultimate abilities are ready. And as she launches her Graviton Surge into the room, sucking every enemy into one concentrated mass, you release your RIP-Tire explosive, steering it into the group and killing them all, buying your tank characters precious seconds to reverse the payload as the timer reaches zero and you win the match with bated breath.

This is what Overwatch does to your brain. These are the thoughts that race through your head. These are the scenarios that encourage you to play the game in such ways. There's even a post-match voting period in which you congratulate individual efforts, whether it be the amount of hit-points Mercy healed, the number of warp portals Symmetra erected, or the percentage of damage Reinhardt blocked with his shield. In these moments, Overwatch is telling you one important thing: there is no single way to play.

Unfortunately, it sometimes ignores this mantra. The end of each match initiates a "Play of the Game" highlight, which showcases the most impressive moment from the perspective of the player who performed it. However, unlike the post-match voting period, the highlight video almost always focuses on killstreaks. These are flashy--especially when the player shows a clear mastery of Reaper's close-quarters attacks, or Genji's ninja-star barrages--but they don't recognize healers or tank characters enough. It's a minor complaint, and only stands out because the rest of Overwatch is so accommodating to individual playstyles--but it's jarring nonetheless.

It's also disappointing how, for every way Overwatch rewards mastery of your favorite characters, it stumbles with its randomized loot system. These awards are all aesthetic, to be clear--a new character skin here, a new celebration stance there--but too often loot crates contain unwanted items. More importantly, they delay the process of outfitting your favorite characters, the ones you use most often, the ones you grow attached to. You can accrue Overwatch gold to unlock specific items, but like the items themselves, gold is strewn throughout random loot crates. In this respect, Overwatch uses gambling to undermine your desire for specific unlocks.

There is a genuine learning process here. There is real value to the time you spend understanding these overlapping systems.

But in almost every other way, Overwatch encourages a more tangible sort of progression: that of filling a critical role on your team and understanding its intricacies the more you play, adapt, and grow. There is a genuine learning process here. There is real value to the time you spend understanding these overlapping systems.

It's that intoxicating path of discovery that makes Overwatch so varied, so rewarding, and ultimately another seminal release from developer Blizzard. Overwatch is an intelligent cascade of disparate ideas, supporting one another, pouring into one another, and coiling around themselves as they flow into the brilliant shooter underneath.

Mike Mahardy spent 70 hours playing as every hero in Overwatch, and plans to play many more. His favorite characters are Zarya and McCree. Blizzard provided a copy of Overwatch for review. 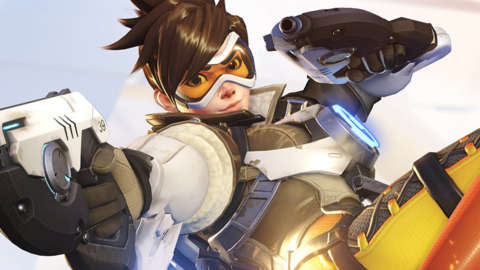 Overwatch is a highly stylized team-based shooter set on earth in the near future. Every match is an intense multiplayer showdown pitting a diverse cast of soldiers, mercenaries, scientists, adventurers, and oddities against each other in an epic, globe-spanning conflict.