OutRun 2006 Coast 2 Coast offers a fun, accessible experience to racing fans who just want to jam on the accelerator and go.

It's been about a year and a half since the OutRun series was remade for the Xbox in the form of OutRun2. That game was a pretty simple but fun arcade racer that effectively captured the spirit of the original arcade game. This time around, Sega has chosen to release OutRun 2006: Coast 2 Coast for the PlayStation 2 and the PlayStation Portable, in addition to the Xbox. The new game doesn't stray very far at all from the formula established by OutRun2, offering gameplay that largely feels the same as the previous game, but with a good deal more content to explore and unlock.

The OutRun games have always relied on the classic design principle of simple to learn, but hard to master. Coast 2 Coast is no different. As an arcade racer, playing this game is quite simple; you've got the accelerator and the brakes, and you steer your car with the left analog stick. If that's too simple for you, you can drive with a manual transmission, but those of you who prefer a more accessible experience will be able to pick automatic transmission. The game is pretty forgiving when it comes to bumping walls or grinding on guard rails or other cars because you can usually recover pretty quickly, but if you really mess up, your car will go flying up into the air before landing, causing you to lose a lot of speed and time. New to Coast 2 Coast is a "slipstream" feature that lets you draft behind cars, which in theory increases your speed without using more power. Drafting works somewhat strangely in this game, though, as the amount of space behind each car you can use for drafting seems too big.

As in all the previous OutRun games, you can easily put your car into a powerslide by tapping the brake and turning to one side as you go into a turn. As you drift, you can exert a small amount of control over the car to get around slower traffic to the outside or inside. You don't lose speed as you slide, but you don't accelerate either, so as the game gets more difficult, you'll need to be judicious about when it's to your advantage to drift and when it's better for you to get around a bend the old-fashioned way. As you race the tracks over and over again, you'll start to figure out the ideal lines to take around each curve--the desire to increase your efficiency gives Coast 2 Coast the same addictive quality as the previous games in the series. There are 30 different tracks in the game, all with colorful, interesting backgrounds, including tracks where you race across the Golden Gate Bridge, along a beachfront city, through a redwood forest, and through a neon-lit "casino town" that resembles somewhere like Las Vegas or Atlantic City.

There's a wealth of different modes available in Coast 2 Coast's single-player game. The classic OutRun mode has you driving down a series of branching pathways, reaching checkpoints before your countdown timer runs out. There's a heart attack mode where the girl in your car will call out various challenges for you to do, ranging from simple ones such as passing as many cars as possible or not crashing, to oddball ones such as dribbling a giant beach ball down the highway or dodging legions of UFOs hovering over the road. There are also time attack modes where you can race against the clock or ghost cars, but the meat of the single-player game is in the Coast 2 Coast mode. In this mode, there are flag man challenges, which require you to complete a series of races against computer-controlled cars and sometimes participate in drift or slipstream challenges. There are also girlfriend challenges, which require you to complete missions that are similar to those in the heart attack mode to unlock new girls and a new series of challenges. Coast 2 Coast also offers an arcade mode where you can play the arcade version of OutRun2 SP. It sounds like a ton of content, but to be fair, the races and challenges all tend to feel the same after a while, with the game's difficulty ramping up slowly as you get deeper into the campaign. Thankfully, the addictive nature of the game is likely to keep you interested, even when it becomes obvious you've seen pretty much everything the game has to offer.

As you complete races, you'll earn points, or OutRun miles, which you can use in the game's showroom to unlock tons of content. Not only can you unlock all of the game's 13 Ferraris, ranging from the classic Testarossa and 328 GTS to the exotic F40 and now-infamous Enzo, but you can purchase different colors for the cars as well. The showroom also lets you purchase new tracks, primarily the reverse versions of the tracks from the single-player game. You can purchase different colors for the cars, too. You'll also use points to unlock remixes of the background music tracks, including the original mixes of the songs from the first OutRun arcade game. Considering how much is available in the showroom, it could take you quite a bit of racing to unlock everything the game has to offer.

The PS2 and PSP versions of the game offer connectivity options through the USB ports on both consoles. Since the games are essentially the same, you can copy your created profile, or license, back and forth from one version to the other. This lets you continue your career on the PSP while you're away from your PS2 and then dump the progress you've done on the PSP back into your PS2 game, including miles that you've earned while racing. It's an interesting concept in theory, but since the games are basically the same, it's hard for us to imagine anyone but the most hardcore Outrun fan buying both versions just to get the connectivity feature. If you're trying to decide between the two, the PS2 version of the game controls noticeably better because the analog stick is more precise on the dual shock controller than the stick on the PSP. However, the PSP version looks just about as good as its full-sized cousins, so if you're more interested in racing on the go, you won't really go wrong with that version.

While there are no split-screen modes available on the PS2 or Xbox, multiplayer action is available online for up to six players or through system link. The PSP also supports six-player multiplayer both online and through local ad hoc play. The online population is a little sparse, but our bouts of head-to-head racing yielded good results on all platforms. Network play was smooth and lag-free, and the game lobby gives the game creator a number of options beyond just choosing the course. You can restrict cars of certain classes, and enable or disable catch-up handicaps as well as collisions. Players are assigned rank points depending on how well they do, and if you sign in online, you can also check the worldwide high scores on various courses as you play the single-player game.

Coast 2 Coast for the PS2 and Xbox appears to use the same graphics engine as its predecessor. Not much has changed since OutRun2 as far as the visuals go, but the environments and the cars still look great, with a good amount of detail and shine on the car bodies, as well as some nice smoke coming off the tires as you drift around corners. You'll see some interactive elements on the tracks, such as traffic cones to kick around, and the variety of settings you'll race through and the steady frame rate on the PS2 and Xbox make for a great-looking racing game that gives a nice sense of speed. The graphics on the PSP don't take a backseat, as they're every bit as detailed and vibrant as on the larger consoles. The frame rate can take a bit of a dip here and there, but for the most part they hold up well, and it looks amazing on the PSP's small screen. Coast 2 Coast's sound is also excellent, thanks to an awesome soundtrack anchored by classic songs such as Splash Wave, Risky Ride, and Magical Sound Shower, all of which hardcore OutRun fans will remember from the original game. The engine-rev noises and the screech of your tires squealing around a tight corner also punctuate the game's audio quite nicely.

If you're looking for a fun arcade racer with lots of Ferraris and the ability to do some fast and furious drifts, you won't go wrong picking up OutRun 2006: Coast 2 Coast. Those who've already played OutRun2 may find the experience to be largely the same, but it's definitely still a worthwhile experience, especially for PS2 and PSP owners who may have missed out on that game. For Xbox owners who've already played OutRun2, there's less of a compelling reason to buy Coast 2 Coast. You'll have to figure out how much you really love OutRun before you shell out another 30 bucks for a very similar game. 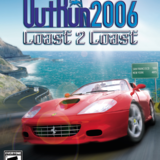