The plain graphics and cookie-cutter objectives can make some of the levels drag a bit, but the storyline and the sheer size of some of the game's levels make the whole package easier to swallow.

The 3D third-person beat-'em-up genre hasn't exactly produced a stellar product yet. Simple games like Fighting Force 2 and even more structured games like Urban Chaos have tried to reproduce the constant fighting of games like Final Fight and Streets of Rage in a 3D format. None of them have really gotten it right yet. Oni is essentially shooting for the same goal, though Oni's fighting is tightly wrapped in an interesting, anime-inspired story, making it more compelling than your average beat-'em-up.

Oni tells the story of Konoko, a police officer working for the Technology Crimes Task Force. The TCTF is out to stop all sorts of futuristic organized crime, and Konoko is out in the field, making things happen. In typical anime fashion, the story gets stranger and stranger as it unfolds, eventually leaving Konoko wondering who her allies truly are. In the game, the storyline is relayed through between-mission cutscenes as well as in-mission dialogue between Konoko and her links back at the TCTF headquarters. The voice work throughout the game is quite good, which definitely makes the story more interesting.

While the story is compelling, the methods that deliver the story are pretty contrived. You're given an onscreen compass, which points you directly at your next objective. Most of the objectives consist of simple things, like hitting a switch to unlock a door or defeating a room full of enemies.

Oni's real selling point is its control scheme. The controls in Oni put strafing on the left stick and turning on the right. Most of your common commands--kicking, punching, jumping, and so on--are placed on the top shoulder buttons, while the face buttons are used for things like reloading, using items, and opening doors. At first, the control seems incredibly wild, and it may turn off some players immediately. That's why the game forces you to go through a training level before actually beginning the game. Once you've gone through the training mode, you'll have a decent handle on how Konoko's different attacks work, though it will still take another couple of hours of play before you feel completely comfortable with those controls. Once you're familiar with how the game plays, it's easy to, say, take on four enemies at once, thanks to Konoko's ability to attack to her sides as well as behind her. Also, the game simply lets you do a lot of different things, such as pick up weapons off the ground while you're executing a slide attack or sideways roll. It lends a very action-movie quality to the game, especially when you have four characters all diving for the same pistol. The weapons in the game range from run-of-the-mill pistols and machine guns to gigantic missiles and energy weapons. The weapons are all pretty interesting, mostly because of the effect they have on combat. If you're fighting multiple foes and one of them is armed, you're going to need to take that gun away from your opponent as soon as possible. As soon as a loaded gun hits the floor, every AI character in the room makes a mad dash for it, and there's no consistent way to avoid taking fire, outside of running away and finding cover. The weapons definitely add a sense of urgency to fights, even if using them is usually as simple as backing away from the pack of enemies and picking them off from a distance.

Graphically, Oni doesn't really stand up to other games on the PlayStation 2. The characters all look a little plain. Adding lip movement to the characters would have really gone a long way to making them seem a little less stiff. Also, there are some serious clipping issues throughout the game. It's very easy for characters to knock through a wall, and this makes certain parts of their bodies visible from both sides of the wall. When you're standing close to a wall, rotating the camera will usually let you see through the wall to the other side. Finally, it's even possible for living enemies to get caught in walls and doors--you might see an arm simply sticking out of a wall. To make matters worse, you can then attack that arm and kill the enemy on the other side of the wall. On the upside, all the character animation in the game is top-notch. Attacks and moves flow very well from one to the next, making Konoko look and move like a real person might. The soundtrack and sound effects match up to the action quite nicely, and this adds to the whole action-movie feel of the game.

Oni is a good game, once you get the hang of the complex but utterly necessary control scheme. The plain graphics and cookie-cutter objectives can make some of the levels drag a bit, but the storyline and the sheer size of some of the game's levels make the whole package easier to swallow. 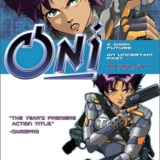