Odin Sphere is a striking game. One look at the ethereal fantasy world and its cast of astoundingly detailed characters and you'll want to see more. In fact, the game looks so good that it might take you a while to realize that beneath all that hand-painted artwork is a very basic beat-'em-up. It's a good beat-'em-up, though, and not just because it looks fantastic. Despite serious performance issues, Odin Sphere successfully brings together gorgeous, stylized visuals and satisfying gameplay in a lengthy and engaging adventure.

The game takes place in the fantasy world of Erion, where several kingdoms are in conflict. The story involves a magic artifact and a prophecy, but it's full of enough dramatic twists and turns to avoid feeling cliché. You start out playing as a valkyrie who is the daughter of a king, but after you beat the game you unlock new playable characters. There are five characters in all, and each one offers a unique perspective on the story.

Before getting to the gameplay, you'll want to take some time to enjoy the visual presentation of Odin Sphere. The game takes place in a child's storybook, so it's an imaginative fantasy world full of monsters and magic. You'll travel everywhere from icy mountaintops to fiery volcanoes and even to the netherworld. Each area is full of detail, with backgrounds that seem to stretch on forever and some great scaling techniques to make it all feel organic and alive. Even more impressive are the highly detailed character sprites, some of which are so huge they fill the screen completely. Odin Sphere doesn't support progressive scan, so it's standard definition only, but the high-resolution artwork still looks remarkably sharp and vibrant.

Unfortunately, the game doesn't look as good in motion as it does at a glance. The character animations are a bit stiff, but they look good, especially for some of the elaborate boss attacks. What hurts Odin Sphere the most is the tremendous slowdown that accompanies the intense onscreen action. It's so bad that it just about ruins at least one of the boss battles, dropping the frame rate almost to a dead stop.

The gameplay in Odin Sphere is simplistic, but it's challenging enough that the game doesn't seem like a completely mindless brawler. You take control of one of five playable characters and visit the various kingdoms in the world of Erion, typically fighting dozens of enemies and a handful of bosses. Each area is divided into small stages, which are connected in a large web. As a result, there are several paths through each area, so you can go looking for treasure or head straight for the main boss. The stages are flat and are connected at the ends to form a continuous loop. To pass a stage you usually have to kill a set number of enemies or fight a boss. The stages look varied, but the structure and patterns are mostly the same. The design works fairly well, and it's nice to have the freedom to take several different paths through a level. However, the problem is that between each stage you have to wait for the game to load. It usually takes only 10 seconds or so to load the next stage, but when the stages take only 20 seconds to clear, the load times become problematic.

Fighting in Odin Sphere is as simple as repeatedly pressing the square button to perform attack combos. You can jump into the air for some aerial combos as well, but each character's attack moves are limited. When you defeat enemies, they'll release magic energy that you can absorb to fill up a gauge. If the gauge is full enough you can unleash a variety of useful spells. The magic isn't especially powerful, but at the very least it's a good way to break up the action. As repetitive as the action is, it's challenging enough to keep you engaged. Even on the easiest difficulty setting it often seems like you're on the verge of death. Some of the bosses will take a dozen tries or more to beat, which gets frustrating after a while. It doesn't help that some of the enemies in the game play rather cheap, with lots of one-hit kills and overwhelming mob tactics that are extremely difficult to defend against.

When you aren't fighting you'll be collecting and synthesizing items. As you play you'll find seeds, fruits, potions, artifacts, coins, and scrolls. Eating food in the game not only replenishes your hit points, but also earns you experience. With enough experience you'll level up, and your maximum hit points will increase. This gives you incentive to pick up and eat just about everything you see. There are even a couple of restaurants in the game where you can take items and recipes and make them into all kinds of experience-rich meals. You can also create potions on the go, which is important because having a good stock of restorative items is often the difference between life and death.

The item system is interesting and it adds a bit of depth to the game, but it also has drawbacks. Because your item space is limited, you'll constantly find yourself having to manage your inventory. You can purchase extra bags to carry more items, but money is scarce, and even if you can afford an extra bag you'll end up filling it up right away because there are so many items in the game. The item interface also feels clumsy. To use an item you have to pull up a menu, which pauses the action. Then you have to go through a handful of poorly organized menu wheels to find what you're looking for before you can finally put the item to use. It would have been nice to be able to map the more frequently used items to the D pad or unused shoulder buttons so you could use them on the fly without interrupting the action.

Beyond the visuals, the presentation in Odin Sphere is further enhanced by good sound design. All of the dialogue in the game is fully voiced, and although the English voice-over is well done, there's also the option to listen to the original Japanese voice track. The ambient sounds, such as birds chirping in the forest or wind blowing across a craggy mountain peak, add a nice touch to the scenery. Rounding out the audio is a great orchestrated soundtrack that fits the fantasy theme of the game perfectly.

Odin Sphere is a great-looking game that also plays well. It does suffer somewhat from uneven performance and inelegant design, but it's still an undeniably enjoyable game. If you aren't hooked by Odin Sphere's unique visual style, then you'll be grabbed by its classic sentimentality and tough-as-nails difficulty. Add to that a good 40 hours of gameplay for slightly less than full price, and Odin Sphere is a game worth playing.

View Comments (1)
Back To Top
7.6
Good
About GameSpot Reviews 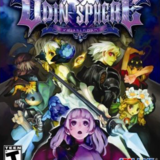