After Blade Runner implanted itself into the minds of moviegoers back in 1982, elements of its cyberpunk world and story would echo throughout pop culture for decades to come. Despite writers, filmmakers and game designers telling stories in similar worlds with outstanding results, the familiar dark rainy streets, grimy neon lights, and cautionary tales of body augmentations remained seemingly steadfast. With that in mind, it’s a small revelation to see Polish studio Bloober Team take early cues from these influences and use them as a springboard to create something new and exciting with Observer.

Set in the year 2084, Observer tells the story of Daniel Lazarski (played by Blade Runner's Rutger Hauer), a detective who works the despair-ridden streets of Krakow under the direction of the leading corporation of the Fifth Polish Republic, Chiron. The world at large has gone to ruin. A digital plague killed thousands of augmented people and a colossal war wiped out any previous global superpowers. Thanks to this all-consuming conflict, Chiron rose from the ashes and became the leading authority and manufacturer of basically everything. Lazarski takes jobs from his contact at Chiron and using his body tech, is able to violently jack into the minds and memories of people (alive or dead) to track clues and solve crimes. Hence his official job title: Observer.

Lazarski gets called to a slum in the worst part of Krakow and this is where the majority of the game takes place. Citizens are divided into classes and this bleak Class C district is bursting at the seams with desperate, frightened people hiding in their rancid apartments and whose only escape from the absolute hell of their daily lives is drugs--chemical or technological.

Essentially a detective story, Observer almost immediately becomes more than the sum of its parts. Talking to residents, examining crime scenes and deciphering clues make up a lot of the gameplay here but it is all housed inside gorgeously detailed environments, the twisted memories of deranged strangers, and one of the most intriguing cyberpunk narratives in years. There's a constant sense of the towering dark skyline of the city but you're too focused on putting your hands in the muck to feel like you're missing out on anything greater. The society that has been carved out in this apartment building is all that matters and it’s here that Observer starts to pull away from its influences and blaze its own unique trail.

Told from a first-person perspective, Lazarski slowly unravels events with his augmented technology by scanning crime scenes for either biological or electronic evidence (either of which can reveal different clues). He also makes use of his "Dream Eater" augmentation, which is designed to observe people’s minds. Throughout the course of the game, it is these extraordinary sequences that present the horrific story beats in psychedelic, surreal ways.

From terrifying nightmare worlds, low-tech video game holograms and game designs that border on mad genius, both you and Lazarski emerge from these sections mentally exhausted but also instantly compelled to push forward to find out what happens next. Exploration, discovery and human interaction drive the narrative forward. In these bloody crime scenes and filthy apartments, the ability to open a door inches at a time adds another sense of sweat-soaked tension. Being in the moment is all that matters and every movement you make, whether it’s scanning ID tags on illegal body mods or sneaking a look at the tenant list before the janitor comes back, pushes you deeper into Observer's illusion.

Another key feature that helps this universe emerge fully formed is the outstanding sound design. Hallways creak as you stalk from door to door, listening to bizarre noises rising from each apartment. The crackle of terrified residents through speakers, broken video screens blasting static and the cacophony of rainstorms envelope you in an uncomfortable tale. Mixed with the truly disturbing sounds coming from somewhere in the basement and Arkadiusz Reikowski’s ominous industrial music and Observer’s clutches become almost impossible to escape.

Unfortunately, there are a couple of moments that are frustratingly jarring. More than once, you are forced to engage in some instant-fail cat-and-mouse sequences that really don’t fit with the rest of what Observer is trying to achieve. However, they are brief and are over within a few minutes. Problems like this are quickly forgotten when you’re lost in a discussion with a tenant telling you about his religious order which rejects body modifications or slowly discovering the oppressive extent of Chiron's reach, from desktop computers to picture frames. Everything is covered in a film of grime. Random neon lights sputter in and out of life in the hallways and obsolete technology is bolted onto apartment doors making it clear that nobody of importance cares about this corner of the city.

That’s why Observer succeeds as well as it does. Every scene adds a meaningful piece of the puzzle to a world and a story that you want to immediately know more about. It consistently presents surreal moments and surprises that would seem like, on paper, the work of lunatics. However, in this grimy and hopeless corner of Krakow, they feel completely at home. The writing for even the most fleeting of characters (even dead ones) feels genuine. Every person here, from crappy parents yelling at their kids while talking to you through a grimy video screen to abstract constructs of lost souls trapped in their own minds, has a convincing life of their own and that commitment to detail make Lazarski’s descent into this future hell, and his own personal demons, all that more compelling.

Cyberpunk is a reflection of where we’re headed as a society, an oddly alluring reality where we've allowed impressive technology into our lives at the cost of our humanity. This is a niche genre that needs new revisions and new pioneers so it can keep evolving as we inch closer to seeing its fictional warnings play out in real life, and Observer adds to the familiar parables in fascinating and unexpected ways. In that respect, and on so many other levels, Observer is a haunting and remarkable achievement.

View Comments (71)
Back To Top
9
Superb
About GameSpot Reviews 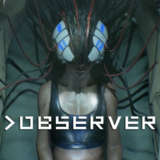 David Rayfield is still waiting until technology becomes convincing enough for him to live in a shipping container hooked up to a VR headset. It might be a while. Observer was played on PC using a complimentary copy of the game provided by the developer.