Nights Into Dreams is short and sometimes frustrating, but that doesn't prevent it from being magical.

The freedom of flight appeals to nearly everyone; there's something magical about the ability to leave the ground and take to the skies. That fascination people have with flight is clearly what made the concept behind Nights Into Dreams so thrilling years ago, and it's what will draw people to the game even now.

As the story goes, a girl named Claris and a boy named Elliot have ventured into a world of dreams. Now they must save that magical world by teaming up with a purple flying creature known as Nights, the last of his kind to avoid capture by an evil army. You choose one of several courses, and at first you control one of the two children. Awkwardly, you wander the landscape until you reach a series of columns that encircle your airborne friend. Touching Nights causes him to take flight, and then you are free to soar through the skies for as long as two minutes.

Though Nights Into Dreams is an old design at its heart, it offers a liberating experience even by today's standards. Nights moves responsively, and he can perform air dashes and somersaults as he negotiates an aerial wonderland filled with magical rings that regenerate his energy meter. (Nights has no gender, incidentally, although we've referred to the jester as "he" for the purposes of this review.) That energy allows him to keep moving at high speeds while he collects blue orbs. Once he has gathered 20 orbs within the current portion of the course, he can toss them into a giant translucent bubble, and then he is permitted to return to the columns and begin flying through a new portion of the current course.

A certain number of restrictions are necessary to ensure that Nights Into Dreams works as a game. The most prominent of those restrictions is that if Nights doesn't return to the starting columns within two minutes, any orbs he has in his possession go flying everywhere like rings in a Sonic game after a collision with an enemy. Nights departs, and then you're left controlling the child, who fumbles around the landscape in an effort to collect and turn in orbs, just like his or her winged friend. However, a hostile pod is in pursuit by that point, and the game unceremoniously ends if the pod captures the youthful hero or heroine in its tractor beam. This dynamic adds tension to the experience while you're controlling Nights, because you want to do everything you can to avoid a risky reunion with the child, and yet you also want to collect as many orbs as possible before you return to the columns just ahead of the last few ticks of the timer.

At a glance, Nights Into Dreams is a platformer wherein you happen to fly a lot, but it feels more like a racing game when you're playing it properly. Speed runs are your goal, and your most capable enemy is the timer. You want to obtain 20 blue orbs as quickly as possible, and you want to turn those in promptly because then you can get more points by collecting additional orbs before finishing one of the four legs of the proper race. Courses that at first seem like a jumbled mess slowly take form as you memorize the location of jewel caches and try to move from one to the next without slowing down too much.

The boss encounters at the end of each course tend to drag the entire experience down a bit, unfortunately. Even once you have figured out how to defeat each boss, which rarely happens during the first meeting, trouncing some of the bosses can prove quite difficult. Battles are distinct and therefore memorable, but sometimes they're difficult to see because the camera doesn't always follow the action as smoothly as it should. You're still on a very strict time limit, as well, even though you're facing foes that will potentially stun you and leave you dazed for several seconds at a time as you make failed but necessary approaches.

For instance, one boss hurls giant playing cards at you, three in a row. Those projectiles can be difficult to see coming, so you just have to get used to diving and swooping as you approach. Then you can hopefully draw close enough to perform an aggressive dash before your foe retreats. A properly timed dash knocks loose the fellow's cape so that you can actually start to do some damage with subsequent strikes. You then need to try to stay between him and his cape so that you don't have to worry about knocking it loose again before you can continue inflicting damage. The process is more tedious than fun, unfortunately, and it tends to eat up the seconds at an alarming rate. Other bosses have their own ways of layering on the monotony.

The good news is that once you beat a stage for the first time, you can then practice fighting its boss at your leisure. The bad news is that until that happens, you have to play through as many as eight minutes of flight just to earn another shot at the boss. This tends to discourage a lot of exploration on your initial visits to a given stage, since odds are decent that the first few times you meet a boss, he will cut your adventure short just shy of the finish line. There aren't a lot of stages in the game, either, so you cover a lot of familiar ground if you play for more than a couple of hours.

Even with restrictions in place, though, Nights Into Dreams does a good job of capturing a sense of whimsy. The courses are populated by clowns and toy cars, oversized traffic signs, and beautiful foliage. The game tends to look muddy, even when you're playing through the Brand New Dreams version of the game that is taken from the PlayStation 2 port, rather than the original Sega Saturn edition. By default, the newer version gives you a wider viewing perspective, and the characters and environments feel more like magic and less like polygons. You can also head to the settings menu to tweak certain elements in either version, if you like. There are also several adjustments to the core package that factor in the platform. Leaderboards are available so that you can compare scores with your friends or with the world at large, and there's a variety of unlockable content that includes brief video clips, artwork, and musical selections that you can listen to from a menu. Achievements are also available, but they mostly reward you just for completing stages, rather than for doing anything particularly creative.

If you spent many happy hours with Nights Into Dreams when it was first released, odds are good that you'll enjoy this reunion. The game hasn't aged perfectly, but it still provides a memorable experience that players should enjoy even if this newest edition serves as their introduction to Nights, Claris, and Elliot. Flying through magical worlds is still fun, much like you probably dreamed it would be. 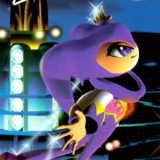