Nicktoons Unite! is too content to be another generic platformer that leans exclusively on its license.

On the scale of big-time celebrity team-ups, the coming together of four of Nickelodeon's top cartoon heroes under the banner of a single game in Nicktoons Unite! ranks somewhere between Power Man and Iron Fist teaming up to fight crime and Elton John, Dionne Warwick, Stevie Wonder, and Gladys Knight getting together to sing "That's What Friends Are For"--that is to say, it isn't very good, feels more than a little forced, and does next to nothing that hasn't been done better elsewhere. Certainly some members of the younger set will squeal with glee at the thought of being able to control SpongeBob SquarePants, Danny Phantom, Timmy Turner, and Jimmy Neutron all in one game, but once they get their hands on this decidedly lackluster platformer and its lousy controls, that delight will quickly turn into frustration and boredom.

Indeed, you can play as the four Nicktoon heroes throughout Nicktoons Unite!'s relatively brief adventure. You can only play as one hero at a time, but you can switch between them on the fly by means of the touch screen. Each hero occupies a corner of the touch screen, and all you have to do to switch between them is use the stylus to drag and drop a character's icon into the center section. Each character has its own abilities that you can use to get through a level. SpongeBob can float up to high areas using a big bubble and can shoot bubbles that damage enemies; Danny Phantom can phase through solid objects and shoot plasma bursts; Timmy can disguise himself as a bush to hide from enemies and can call down his fairy godparents to slow down any potential foes; and Jimmy Neutron can use the one-two punch of a flying jetpack and a shrink ray. Each character also has one special move that can be activated only by picking up a power-up. Once you get a power-up, you need to move the stylus on the touch screen in a specific pattern to pull off the special.

For the most part, you don't need to use any of the special abilities--you will be fine using the normal attacks. Most enemies (save for the bosses) are dull-witted and unaggressive. Usually, you can walk into a level and start shooting up the place without getting damaged or really even moving around much. Most of the game's challenge comes from trying to navigate the platforming sequences. It's not that they're tough, but the character control is squirrelly and loose, and it's easy to mistime jumps simply because you can't get a proper handle on the character. The camera is also a pain. It tends to snap around or zoom in at inopportune times, and the manual camera positioning is too touchy. The right and left trigger buttons are used to move the camera, but it's very easy to overshoot the angle, which leads to a lot of annoying situations where you're forced to stand around fiddling with the camera before you can properly make a jump.

Nicktoons Unite! does present itself better than it plays. The graphics are surprisingly crisp looking, especially the character models. Up close, the characters animate well and look clean--even the enemies. Obviously, the main characters are more detailed, but none of the characters seem to have gotten the short shrift here. The environmental designs are decidedly more lackluster, though. Everything maintains the same clean look of the characters, but aesthetically, all the levels look drab and repetitive. The technical merits are there, but the artistic merits are not. The audio is pretty run-of-the-mill for a game of this type. There's no voice acting--all the dialogue comes in the form of scrolling-text storyboards in between levels--and the music and sound effects are of the generally cartoony, inoffensive variety. There's nothing standout here, but it does the job.

Nicktoons Unite! is, simply put, a very generic platformer. Lots of these games get released every year, and many of them come out something very much like Nicktoons Unite!--exhibiting the same pitfalls of platformers past, and no measure of forward thinking. And the scant few touch-screen mechanics do little to break up the monotony. If your kid is the biggest Danny Phantom fan on the planet, or still insists on carrying around a SpongeBob lunchbox at all times, Nicktoons Unite! might prove to be a marginal distraction for them. Anyone else, though, would do well to simply ignore this one. 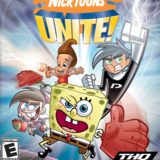 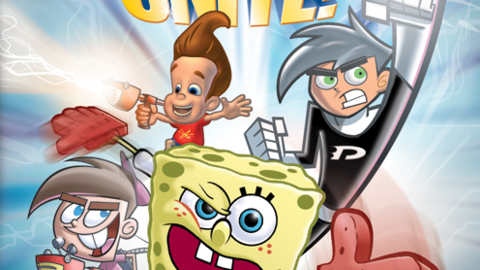 This adventure game features characters and locales from a number of different Nickelodeon cartoons.